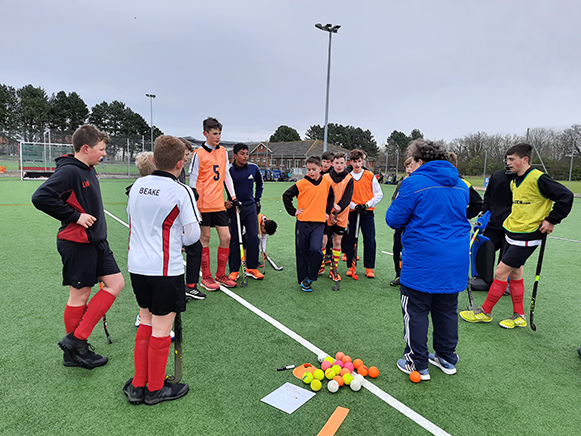 One of the core values of FIH is the concept of equality. Across the global hockey community the aim of the international governing body is to filter down the message that opportunities within the sport should be equally open to all. This includes all aspects and roles within hockey, from playing to coaching, to umpiring to administration.

One hockey organisation in England is intent on pushing equality through its coaching programme. The Norfolk Hockey Association (NHA), supported by England Hockey, has launched the NHA Coaching Community, with Coaching Girls as its first focus.

Mary Cheesman, who is Player Pathway coach and Norfolk Player Pathway Lead Coach for NHA, is leading the programme, which had its first session in January 2021. At that session 18 coaches, representing eight clubs across the county, came together to thrash out some ideas.

‘The first session was all about finding out what the issues were around females and coaching,’ says Mary. ‘On the one hand I was asking myself and the player pathway coaches more and more questions about how we are coaching our girls’ squads and how we can meet their needs while challenging them to be more experimental, creative and have the confidence to problem solve.

‘And then we needed to ask ourselves how we can encourage the players themselves to become Leaders and Coaches and ultimately the role models our young female players need. We want to enhance their coaching experience with a more diverse coaching body.’

As a female coach, working with players from school level through to representative level, Mary is more than aware of the paucity of female coaches working in hockey, particularly at elite level. However, a coaching programme to up skill the hockey workforce, was run by NHA and supported by England Hockey in 2019/2020. With more than 40 per cent of the participants on the course being female, Mary was convinced that this was something that could be developed and so the idea for the first focus of the Coaching Community was born.

Mary herself says she faced her own challenges as she worked her way up the coaching ladder from a volunteer/parent to a Level 3 coach.

“There were many times when I felt outside my comfort zone and vulnerable about my hockey knowledge compared to others on the course. There was a massive amount of work to do and a lot of travel. This was while I was working full time and had two young children. But I was resolute, supported by my husband, players, coaches, squads I coached, and my male mentor who got me through. These support networks were invaluable.”

The first session led to a raft of feedback and ideas and a follow-up is planned later this spring. NHA is planning a practical session in the summer for women interested in getting into or developing their coaching.

The importance of sessions such as the NHA Coaching Community – Coaching Girls is being recognised across the country, with many clubs and associations making their own plans. Mary is clear about the motivation behind her work.

‘Change is happening but there are still many barriers and stereotypes to overcome. Developing more female coaches is one strand of inclusion. Women still tend to have greater family responsibilities and, therefore, less time. And, there are not enough role models, especially at the elite end.

‘Female coaches can lack confidence in their experience, knowledge and other skills to put themselves forward, and the perspective of those recruiting and appointing in clubs and other organisations is still too narrow.  However, women also have the responsibility to challenge and to change the norms. We must support a wider range of coaches coming into the sport, to enhance our coaching and consequently the coaching experience of our players.  There are doors still to be opened.’