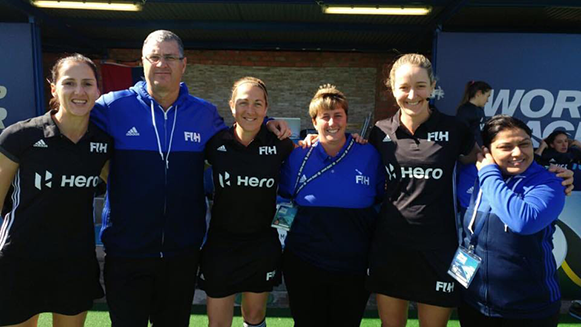 On Episode 3 of the Hockey Pod, we heard from Zimbabwe’s Sarah Bennett about some of the trials of staying abreast of everything that is happening on the international hockey scene, particularly in the realms of training and developing coaches, umpires and officials. Just to underline the point she was making, Sarah had limited connectivity during the recording of the podcast due to Zimbabwe’s recurring power shortages.

Over a long and varied hockey career, Bennett has played for the Zimbabwe national team, including at the Junior World Cup in 2005, before taking up umpiring and officiating. She most recently took up position as a FIH Hockey Pro League Match Manager and will be at the Olympic Games Tokyo 2020 as a technical official. She is also Chair of the Development Committee for the African Hockey Federation, a position she took up towards the end of 2019.

“For everyone around the world, 2020 has been a difficult time but for me, new into the role, the past year has been a massive learning curve. Normally we would tie up FIH Educators with face-to-face courses but everything has had to move online, and connectivity over the internet can be an issue.”

When the connectivity is good however, the online courses have been a huge success. Support for the cost of hosting courses has come from the FIH Academy and the Asia Hockey Federation. Bennett says this has been invaluable for developing the skills and knowledge of a large number of umpires and officials from across the continent.

“The approach we try to take is ‘Hockey without borders’, so we deliver hockey across the entire continent. We are trying to get educators across all the different disciplines who can deliver the courses to people in those regions. The distance you are travelling to do those courses face-to-face is not an option so we are trying to get educators who can deliver online courses. Last year we delivered 64 workshops and we spoke to over 400 coaches. We would normally never get anywhere near those numbers, so that is a positive.”

Existing relationships between other countries and the African nations is something that Bennett is keen to harness.

“We have had educators from around the world providing online courses pro bono. That has been a real boost. Our main aim for 2021 is to grow the education of coaches and facilitators who can deliver the courses within Africa. If we can continue to use educators pro bono to develop facilitators in each national association, that will be a big step forward in furthering the game in Africa.”

Bennett’s own experiences as an official at various international events is vital for development of officials across the Africa continent. She is able to disseminate her own knowledge to officials at continental and national level events.

“I have been Tournament Director (TD) at events in Africa and other officials have said to me after the event that they hadn’t realised how much you develop your skills and knowledge as a TD depending upon the events and circumstances you have been involved in.

“For example, you might be hot-spotting off your phone because the power has gone. But, it is difficult to explain to someone else how you have to face all manner of situations. You have to have been there and experienced it yourself.”

One international experience that has stuck firmly in Bennett’s memory is the 2018 Indoor Hockey World Cup in Berlin. “It was amazing. The crowds, the atmosphere. Two halls running at the same time, the videos do not do it justice. But to come home and pass that knowledge on is invaluable.”

“It is exposure like this, at the top level, that allows you to keep up with the game – how you interpret the rules, for example. if you don’t have that regular international experience, either as a player or as an umpire, when you get to a top event, unless you have prepared rigorously, both mentally and physically, you will be slower out of the starting blocks. So to be exposed to the highest level on a regular basis is hugely important.”

Listen to the full podcast here.