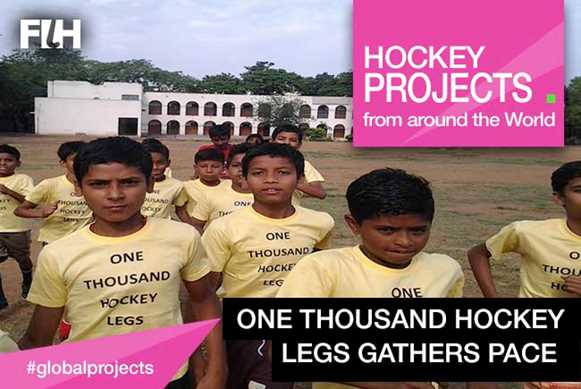 As we celebrate projects around the world, many of which seek to enhance the lives of people through hockey, it is worth remembering that some, if not all, the projects would not be able to survive without outside support. Many of the projects are helping to lift disadvantaged children out of poverty and introduce them to a better health and education. One man who has used his passion for hockey, political know-how and business contacts to great effect is former geologist, turned journalist and now chief executive of an NGO, K Arumugam.

One Thousand Hockey Legs is a project that tries to take hockey to young school kids. It's a programme that was started by the Hockey Citizen Group,with the aim of providing children with an opportunity to understand, play and enjoy hockey. The programme structure includes forming one or two teams per school, conducting friendly matches between schools, forming a team in each city, participating in state and national level competitions, holding exhibition matches, organising an annual hockey run and mentoring talent for the national team

The sub-plot of One Thousand Hockey Legs is to help lift disadvantaged children out of poverty and give them an opportunity for a better life. And the hard work of the past seven years was recognised when Arumugam was presented with Outstanding Achievement of the Year award by Hockey India President Dr Narinder Batra at the 2014 Hockey India Annual Awards.

On receiving the award, K Arumugam said: “This is like the Nobel Prize for me. It is by far the biggest recognition of my work.”

The idea behind the project can be traced back to 2008 when India failed to qualify for the 2008 Beijing Olympics. Arumugam started his own Non-Government Organisation, the Hockey Citizen Group, and One Thousand Legs was the first project under that umbrella. The passionate hockey fan’s aim was to start raising the level of hockey in the country from the grassroots upwards.

Explaining in greater depth just what One Thousand Legs hopes to achieve, the CEO says: “The chief target of the NGO is to bring 500 new kids into hockey in each city in India. The idea is to start and then run hockey teams in at least 25 schools in each city.”

This target has already been reached in Delhi, and an additional target was met when three young players from Delhi were selected to play in the 2015 Junior National Championships.

“So far, we have introduced about 2,400 children to the sport. This is an uphill task, but receiving awards like this are just the right kind of recognition and motivation we need,” said Arumugam.

And Amurugam and his team have been proactive in reaching out to businesses and organisations for help. The recent Cairns Junior Hockey Cup was sponsored by oil producers Cairns India and served to provide a competitive platform for the children of Delhi who had been enjoying regular coaching through the project.

Also earlier in the year, Hockey Australia chief executive Cam Vale joined the Australian Minister of Business and Trade on a fact-finding and relationship-building tour of India. As part of the initiative, which was exploring ways that sport and business could build international ties, he organised a hockey coaching clinic in Delhi. The clinic was led by Australian international umpire Tim Pullman in conjunction with coaches from the Hockey Citizen Group. The youngsters were presented with Kookaburra Hookin2 Hockey packs.

Speaking after the Cairns Junior Hockey Cup, Arumugam said: “The energy and enthusiasm surely gives a glimpse of what lies ahead for school hockey in Delhi.”