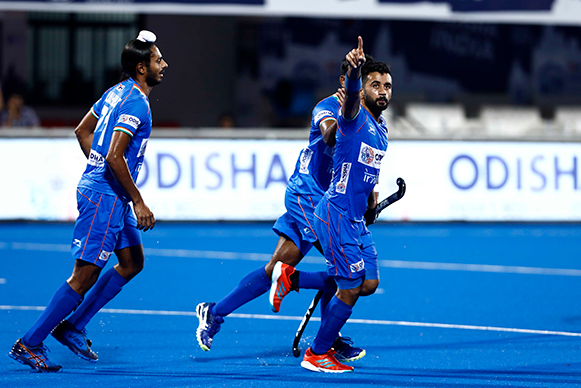 In the first of our feature stories marking the original event dates of Tokyo 2020, India men’s captain Manpreet Singh – the FIH Men’s Player of the Year for 2019 – talks about his memories of competing at the London 2012 and Rio 2016 Olympics, as well as looking towards next year’s Games, where his team are regarded as serious medal contenders.

You made your Olympic debut at London 2012, when you were just 20 years of age. What is your most long-lasting memory of London, and what did it mean to you and your family to represent your country on the biggest sporting stage in the world?
Manpreet Singh: “The [Olympic] village. It was the first time that I saw [famous] athletes walking around. It was like a dream come true, to be in the same space as them. My family was extremely proud, and it was an amazing feeling to be part of the world’s biggest sporting event.”

You also competed at the Rio 2016 Olympic Games, where you reached the quarter-finals before being narrowly defeated by eventual silver medallists Belgium. What are your reflections of that campaign?
Manpreet Singh: “Coming from the 2012 London Olympics and being able to play again in the 2016 Rio Olympics, is another level of feeling. I would say we did well until the quarter-final, but luck was not on our side. It was a learning curve for the team. We improved day by day, and we are ready to be back for more [in Tokyo].”

As the winners of eight Olympic gold medals, India men are the most successful hockey team in Olympic history. How proud do you feel to be the captain of such a famous and successful team, and does it come with additional pressure?
Manpreet Singh: “Being named as team captain is an honour for me. It comes with the trust of leading the team in the right direction, especially when we are eight-time Olympic gold medal winners. There is no pressure, especially when you have support from your team-mates both on and off the field, having gained experience of playing alongside top players like [Germany’s] Moritz Fürste, Barry Middleton and Ashley Jackson [in the Hockey India League].”

Finally, many people have identified India men as potential medallists next year in Tokyo, which will be your third Olympic Games. What is your ambition for Tokyo, and what would it mean to you, your team, and your country if you did manage win an Olympic medal?
Manpreet Singh: “That is my biggest dream, to win a medal at the Olympics. It would mean a lot to me, to make my country, and my family, proud. This is not only for me, but for all my team-mates who are preparing well for a big Games. It would be an unforgettable moment for all of us.”

On this day - 25 July: Atlanta 1996. Goals from Teun de Nooijer, Floris Jan Bovelander and Taco van den Honert gave the Netherlands – who had twice trailed – a 3-2 victory over Australia, a result which helped the Dutch win their pool ahead of the Kookaburras. The Oranje went on to take the gold medal, beating Germany in the semis and Spain in the gold medal match.

Bonus fact: On 24 July, 68 years ago yesterday, India men defeated the Netherlands 6-1 in the final of Helsinki 1952, winning a fifth successive Olympic gold medal. Legendary striker Balbir Singh, who sadly passed away earlier this year, netted 13 times in the event.