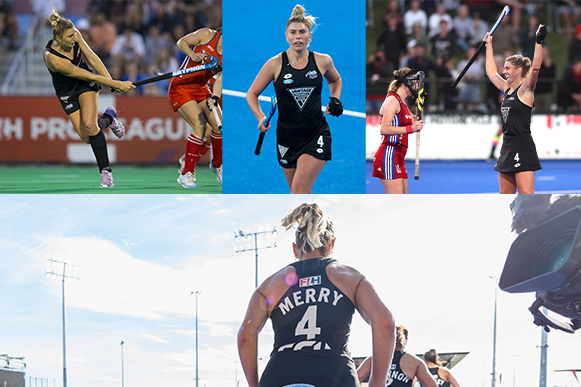 It has been a very fruitful couple of years for New Zealand striker Olivia Merry. Building on the success of the Black Sticks’ first ever Commonwealth Games gold medal in 2018, the prolific goal-scorer was in absolutely devastating form throughout 2019.

Merry played a starring role as her team sealed Olympic qualification by winning the Oceania Cup, as well as finishing top scorer in the 2019 FIH Hockey Pro League with 15 goals in 16 games, five more than Netherlands ace Frederique Matla in second.

Merry’s eye-catching performances earned her a nomination for the FIH Hockey Stars Player of the Year Award for 2019, alongside influential Black Sticks captain Stacey Michelsen, a player who has provided countless assists for Merry down the years.

In 2020, before the COVID-19 global health crisis brought the sporting world to a near stand-still, Merry had been continuing her goal-scoring brilliance whilst simultaneously tearing up the record books. She became the first female player to score four times in a single FIH Hockey Pro League match by netting all of her team’s goals in a 4-1 win over Belgium, taking her international goals tally to 106, breaking the all-time Black Sticks scoring record of 105 set by Anita McLaren (née Punt). Just a few weeks later, Merry claimed another four-goal haul in the Pro League as the Black Sticks claimed a superb 5-3 triumph against Argentina, taking her season’s tally to ten - four more than any other player in the competition.

In the first of a series of profile interviews featuring some of the world’s finest players, Olivia Merry speaks to FIH about her career to date, her personal highlights and more.

Hi Olivia – thank you for talking to us. First things first, what have you been doing to stay active and healthy during the ongoing COVID-19 global health crisis?
Olivia Merry: “We’ve been pretty lucky with the weather of late, we’ve sort of been in lockdown for around 12 days now. We’ve got a beach that’s around a five-minute walk from here, so lots of walks and runs. I’m lucky enough to have a 5x5 metre piece of [synthetic] turf, so I’ve managed to do a few small skills on that, but definitely managing to keep busy and keep positive about the whole situation.”

You’ve had a fantastic couple of years with the Black Sticks, winning the Commonwealth Games and Oceania Cup, top scoring in the 2019 Pro League, being nominated for the FIH Player of the Year Award and, most recently, becoming New Zealand women’s all-time top scorer. What are your reflections on these amazing moments?

Olivia Merry: “I guess the Commonwealth Games success was pretty awesome, a massive hurdle for our Black Sticks team to be able to get over. To finally get that win was something pretty special. I guess for us the Oceania Cup qualifier was huge for us too – we knew if we hadn’t won, the teams that we would have had to play to qualify for the Olympics [were good], so that was another huge moment for us. The individual accolades over the last six months have all come as a bit of a surprise. I always like to credit the individual accolades to being part of this amazing Black Sticks team, and like I always say, I’m the lucky one at the end who gets to score the goal. I’m just really happy to be a part of the team.”

Who or what first influenced you to pick up a stick and play hockey?
Olivia Merry: “When I was five years old I had a family friend who needed an extra player for their six-a-side grass team, so off my dad and I went to the hockey shop and bought my first ever wooden hockey stick. Then we went to the sports shop and bought some rugby boots for the grass field and away I was, and I haven’t looked back since.”

Who has been the biggest influence on your career and why?
Olivia Merry: “It would be quite hard to name [just] one, but I guess in my earlier years playing for the province of Canterbury I had some pretty influential coaches there, like Aaron Ford and Chris Leslie. From my Black Sticks career, having a coach like Mark Hager – who was a fantastic striker in his time – coaching me for seven years, and our current coach Graham Shaw have [both] been massive influences on my career. Definitely in the last 18 months, the influence that Graham has brought has been something different.”

If there was a word to sum up your playing style or attitude on the pitch, what would it be?
Olivia Merry: “One of the words I’ve heard a lot in the last three weeks is very competitive, especially when playing board games in our little apartment! That definitely comes to mind. It probably steams onto the hockey field as well, especially in the attacking circle, so probably relentless.”

What moment on the pitch are you most proud of and why?
Olivia Merry: “Probably taking to the pitch for the first time with the Black Sticks [against India in Napier (NZL) in 2012], putting on the silver fern [New Zealand’s famous crest], which was pretty special for me and also my family, who have been my biggest supporters from day one. Being able to step out there is something I’ll never forget and that very few people get to do. To this day it is something very, very special.”

Finally, what would be the best advice you could give to aspiring young hockey players?
Olivia Merry: “Probably just to ride the setbacks. Whether it is injury or form, to just ride the wave of those [setbacks]. I guess the number one thing for me, what I tell younger kids, is to have fun and enjoy themselves.”