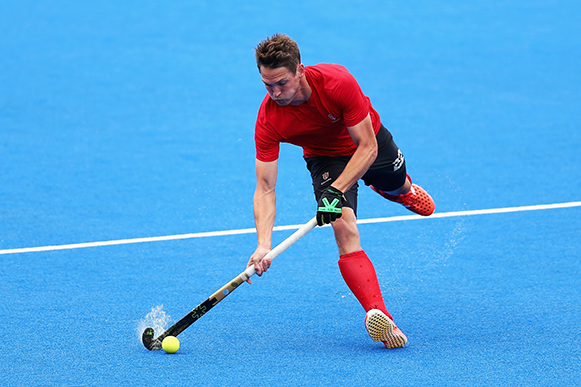 Nothing to lose as John sets sights on Tokyo

John Smythe has more than 115 caps for Canada and is hoping to add several more as Canada prepare for the Olympic Games in Tokyo.

His brother Iain has more than 200 caps for Canada but the disparity in caps is not simply down to the fact that 34-year-old Iain is four years older than his brother: John could be considered lucky to have any international caps at all.

In 2007 John’s colon was removed after he was diagnosed with ulcerative colitis (UC), a disease that results in painful inflammation and ulcers in the colon. UC causes severe pain and weight loss and is a condition which makes it impossible to play hockey. At the time, John was a promising youngster and seemed set to follow his brother into the national set-up.

A visit to the doctor brought home the severity of the disease. “You are literally bleeding to death,” said the doctor. Most of John’s colon was removed and it was thought the problem would go away.

However, despite the colon being removed, John’s health problems continued and three years later he was diagnosed with Crohn’s disease – a type of inflammatory bowel disease that can affect any part of the gastrointestinal tract.

At least the disease now had a name and, with the backing of a team of doctors, John was able to learn how to monitor and live with the condition. There were however some very bad times along the way. “At the lowest moment, I hadn’t eaten for approximately two weeks. I was being fed through intravenous. I was losing an alarming amount of blood each day and couldn’t walk more than 10 meters without feeling faint. At that time, I had lost 30 lbs, half my blood, had to have four blood transfusions, and lived with a line in my arm. Long and short of it, I wasn’t feeling great.”

John says the amazing healthcare he received, combined with the “relentless support” he got from his family, were the reason he managed to finally get back to living a semblance of a normal life. Even more astonishingly, after all he had been through, his thoughts returned to playing international hockey.

“After four years away from the national programme, breaking into the squad was a daunting task,” recalls John. “Although I dreamt of representing my country and playing on the international stage, it’s never been about the accolades: they are just an extra bonus. The over-riding motivational factor that ultimately drove me was the love for the sport. I simply kept playing because I am passionate about field hockey. I also witnessed firsthand the successes my brother, Iain, was having on the national team. He was travelling the world with some of his closest friends, all while playing the sport he loves. What could be better? “

John says he adopted a “nothing to lose” mentality towards making it back into the team, throwing himself into every task and accepting every challenge. The hard work paid off and in 2014, seven years after the first diagnosis, John made his senior debut in a four-team event in Chile. Since then he has been a mainstay of the team.

It has been a far from easy path. John is not able to eat first thing in the day, so morning training sessions are tough as he does not have much energy. He says resilience and patience have been two key qualities he has developed over time and through necessity. Humour and perspective have also been his watchwords.

“My illness helped give me a new perspective on certain aspects in my life. If anything it taught me that humour can have a huge impact on the healing process. It also taught me to not take life for granted and to take the time to enjoy the little things. Additionally, life is too short to spend time doing things you don’t enjoy or to fret on things you can’t control. I have never thought on my illness as a hindrance but an obstacle that I need to learn to live with. My illness also probably gave me more appreciation for the sport. I will continue to play hockey until there is no joy in it for me. And hopefully that will never come.”

With the Tokyo Olympic Games on the horizon, and Canada one of the competing nations, John has plenty of reason to continue his international career.

“My ultimate goal is to compete at the Olympic Games. I’ve been dreaming of competing in the Olympics from an early age. The 2016 Rio Olympic Games was a tough blow as I was one of the last athletes cut for the team. It is absolutely heartbreaking to be so close to a dream that I fought tooth and nail for, for a good part of a decade. Yet, I used the devastation as a learning experience, breaking down every aspect of my game and discovering what I bring to the team. I am just happy we have been able to qualify for back-to-back Olympics and that the dream is still alive.

“As a collective goal, we are aiming for the best Olympic performance of any Canadian Men’s team. The team placed tenth in 1976, 1984, 2000, and 2008. It would be amazing to push the boundaries and reach the quarterfinals in 2021. We have a lot of experience on the team now and it is a matter of staying focused as the competition will be world-class.”