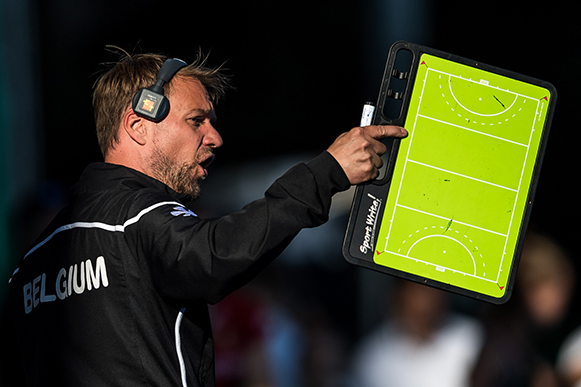 Niels keeps a sense of perspective

Niels Thijssen has been in charge of the Belgium women since October 2015 and, over the past five years, he has enjoyed mixed results. A silver medal at the 2017 EuroHockey Championships demonstrated just what his squad could achieve but a failure to qualify for the Tokyo 2020 Olympic Games showed the frailty of the team when the heat was turned up.

In the FIH Hockey Pro League, despite being the second lowest ranked team in the competition (11th) Belgium has shown consistently good form. The team travels well and has matched higher ranked teams step for step. Thijssen is patiently building his squad and, with some tightening of discipline when the pressure is on, the Red Panthers are fast becoming a force to be reckoned with.

Despite a limited amount of time with his team ahead of their fixtures against Germany, Thijssen is calm and ready for whatever challenges the FIH Hockey Pro League may throw his way.

Are you satisfied with the amount and quality of preparation time you have had with your team ahead of the first FIH Hockey Pro League fixture?
Niels Thijssen: The time we had to prepare for the coming games against Germany was very limited. I think we are looking at a maximum of four to five sessions before we actually play our first games again. We have to be realistic. We live in a different world at the moment and times have been challenging for all of us. I am happy that we can play again, so the limited preparation time is a fact, but we are mostly happy to give it a go again. At the moment, players are mostly with their clubs preparing for the domestic league and it is a conscious decision to let the players mostly prepare with their clubs. These clubs have also suffered in the past six or seven months so this is a time for them to restart and for the players to prepare in their own environment for the upcoming season.

How excited, motivated and ready do you feel the players are for a return to Pro League action?
Niels Thijssen: The players are motivated for sure. Like we have seen with the first games being played at club level, the excitement is obvious and, of course, with international hockey players are super excited but still, I think, at the same time, a bit hesitant. [They are asking] are the games going to be played? Are the games in the future going to be played but, above all, they hope those games will be played and they are super-excited to travel to Germany to play those first games.

Are you able to draw any positives from the break from action of the past seven months?
Niels Thijssen: Absolutely a big yes. We ended up in a situation that no-one predicted but if we look back now, we are looking at a period where the players had a chance to spend more time in their home environment with their friends and family – mostly family. That is not something which is usually given to an athlete. Normally it is a super busy programme, preparing one tournament to the next, so to have this amount of time with your close ones and your inner circle, actually turned out to be a gift. It was a gift coming from difficult circumstances but what we are used to in elite sport is to adapt and try to take the positives out of difficult situations. I have seen players who have used the time really well.

What will you be looking for from your players if they are to win this opening game of the season?
Niels Thijssen: If you have four or five training sessions to prepare and play against a strong nation like Germany, we are not even talking about winning or losing at the moment. Most important is that we can play again, so if there is something we want to see back on the pitch from both teams, it is love for hockey and put all our energy into finally being back on the pitch again. This is for ourselves but also for the people who love to watch the game. Let’s hope we can create some super-exciting games in the coming months for everyone who missed international hockey in the past six or seven months.

What are you hoping to see from your team in the coming months?
Niels Thijssen: We hope to find some consistency to prepare for big tournaments. We need to spend time together, to play games, to have practice games and international games, such as the Pro League. We need to be able to travel the world again to hopefully in the future to prepare in the best possible way and meet other teams to help each other prepare for those tournaments. We are looking for consistency in our programme but we are also realistic and the fact that we restart again doesn’t mean the situation in the world has changed. This may be a cliche but above all, let’s stay healthy first and hockey is in second place in the coming months.