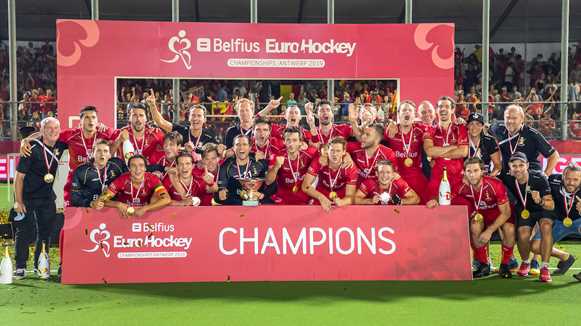 Hockey was showcased in some style at the Belfius EuroHockey Championships as spectators were privy to drama, heartache, shattered dreams, realised ambitions and some astonishingly good hockey.

The men’s semi-final between Germany and Belgium, which saw the Red Lions overturn a 2-0 lead to win 4-2 was, according to most spectators, one of the most exciting matches of recent times. There was raw and conflicting emotion on the faces of the Welsh and Irish players as Wales won 4-0 to secure a spot in the top tier of hockey at Ireland’s expense. The joy on the faces of the Germany’s Nike Lorenz as she scored the last minute goal that sent her team to their eighth final at these championships.

But in the end, it was two teams who are at the very pinnacle of the sport who prevailed and booked their places to the Tokyo 2020 Olympic Games. In the men’s final, Belgium, the current World Cup champions, beat a battling but out-classed Spain to win 5-0, while the Netherlands continued to show the world how to keep winning, as they retained the title they won two years ago with a 2-0 win over Germany.

In the men’s competition, the vociferous home crowd were in for a special evening as their team went into overdrive to take a 4-0 lead over Spain in the first half of the men’s final. The decibel level at Wilrijkse Plein just kept getting higher as John-John Dohmen, Florent van Aubel, Tom Boon and Manu Stockbroekx all found the net in the opening 30 minutes.

Spain fought back in the second half but found Vincent Vanasch in tremendous form. The 2018 FIH Goalkeeper of the Year made several crucial saves and Belgium sealed the win when Alexander Hendrickx put away a penalty corner to make it 5-0.

This was Belgium’s first European title and the firework-illuminated celebrations showed just what it meant to this hockey-mad nation.

In the earlier match to determine third place, the Netherlands put on a first class performance to beat Germany 4-0 and take the bronze medal. This is the Netherland’s eighth consecutive medal at these championships.

The women’s reigning champions, the Netherlands, had signalled their intent half-way through the competition. Early results – two draws with Belgium and Spain – had suggested Alyson Annan’s players were not on their usual game. That all changed towards the end of the competition. Russia felt the full force of Oranje as they lost by 14-0 in their final pool game and then the 2015 champions, England, suffered a humiliating 8-0 loss in the semi-finals – the biggest semi-final loss in the competition’s history.

However, it was a more conservative 2-0 scoreline that sealed the ticket to Tokyo for Annan and her charges. Germany worked hard to add another European title to their tally but they found their opponents in obdurate mood. A 12th minute goal put the onus on Germany to play attacking hockey but, just as Netherlands are prolific in front of goal, so they are no slouches when it comes to defence.

It was two long-serving stalwarts who delivered the goals. Kelly Jonker in the 12th minute and Lidewij Welten in the dying seconds of the game, after Germany had removed their goalkeeper in a last ditch effort to equal the scoreline.

Spain won their first medal at a European Championship since 2003, when they took bronze after ending England’s run of medals at seven consecutive European championships. The sides drew 1-1, but Spain held their nerve to win the shoot-out.