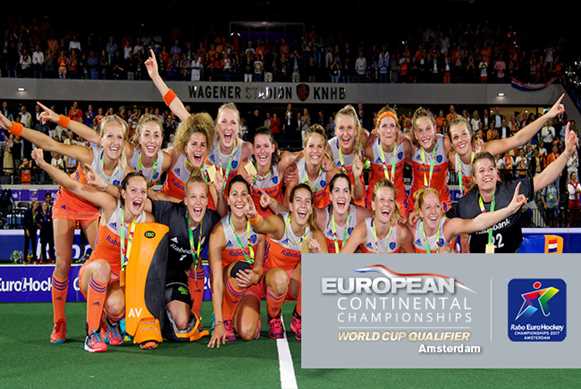 The Netherlands crowned off a glorious Rabo EuroHockey Championship with a 3-0 victory over a feisty Belgium team, while England took bronze after a 2-0 winning scoreline against Germany.

Scotland lost to Czech Republic and so will be relegated for the next edition of the competition.

The result saw the Netherlands lift the trophy for the ninth time in the competition’s history and, in doing so, dashed Belgium’s hopes of automatic qualification for the Hockey Women's World Cup 2018 in London. Spain are the team to benefit – as the Netherlands had already qualified for next year’s World Cup by virtue of a top place finish at the FINTRO Hockey World League Semi-Finals in Brussels earlier in the year. Spain’s seventh place finish at the same event means they are the next team to grab a place at the blue riband event in London next July and August. For Belgium, this is the first piece of silverware they have won at a major, senior international competition since a third place at the 1978 World Cup.

EHF's Stephen Findlater was witness to the action at a rocking Wagener Stadium and wrote this report.

From the outset, the Dutch were on the front foot, putting together wave after wave of attacks. Xan de Waard was the first to draw a big save from Aisling d’Hooghe. Kelly Jonker tipped wide with another chance before the Dutch provided a truly beautiful goal. Lidewij Welten took on the chance from halfway, slipping the ball out to the right to Margot van Geffen who returned the ball to the centre where Carlien Dirkse van den Heuvel got the perfect touch for 1-0.

Caia van Maasakker went close with a 14th minute corner while Maria Verschoor’s driving run earned another set piece but Ireen van den Assem hooked her shot over the bar. De Waard also cut inside brilliantly to unleash a powerful reverse with d’Hooghe booting away with equal strength. Belgium were battling for every scrap, Louise Cavenaile and Aline Fobe throwing everything into their defensive effort while Barbara Nelen and Anouk Raes led their offensive attempts.

Two third quarter corners went without a final touch while Welten’s breathtaking run through the centre of the Belgian defence drew yet another sliding save from d’Hooghe. The second goal was the clincher, coming 12 minutes from the end. Verschoor intercepted to kickstart a swift counter-attack, going through the sticks of Jonker and de Waard before van Geffen worked her way around the back down the right side. She picked out Jonker at the back post who juggled her shot, knocking in at the second attempt for a 2-0 lead.

For good measure, the Dutch grabbed a third from the penalty spot from van den Assem. It was a rough end for the Belgians though they can be delighted with their first ever European medal.

A goal in each half saw England clinch the Rabo EuroHockey Championships bronze medal as they saw off Germany 2-0 in a cracking tie at the Wagener Stadium. They were clinical, Hannah Martin pouncing in the first half for the opener before Alex Danson made sure of the win in the last five minutes.

Reflecting on the win, Danson said she was “really delighted”, adding: “We knew it was going to be a tough encounter and Germany played very, very well. We took the two chances when we had them and I am happy to go home with a bronze medal and very proud of the team.”

Tereza Mejzlikova’s goal saw the Czech Republic land their first win in the EuroHockey Championships, giving them a best ever finish of seventh place. The result also relegated Scotland and kept Ireland up in sixth place in a dramatic closing Pool C game.

Scotland needed a victory to earn their place in the top level for 2019 and they made most of the running, winning plenty of corners but they found the Czechs in robust mood. Mejzlikova made the most of a quick counter attack, slamming home a goal in the 28th minute after Amy Gibson had made a couple of initial saves.

Scotland, though, were in near constant control of the ball but their composure in front of goal proved their undoing time and again. Cechakova made a barrage of brilliant saves as Scotland built a massive corner count but could not find their way past the goalkeeper. Scotland threw everything at the Czech’s when they withdrew their goalkeeper with 12 minutes to go. The pressure on the Czech Republic was increased further when Hanzlova was sent to the sin-bin, but still there was no way through for the Scots.

Today’s results mean that Spain have qualified for the Women’s Hockey World Cup 2018, London by virtue of a seventh place finish at the FINTRO Hockey World League Semi-Finals in June.