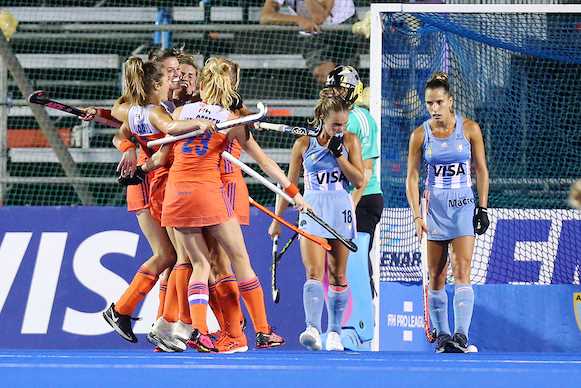 Fans using the Watch.Hockey App have made their choice for the second-best match of the FIH Hockey Pro League in 2020, with the Netherlands 3-1 win over Argentina, which was played in Buenos Aires on 16 February, getting the nod.

We spoke to Netherlands defender Caia van Maasakker about her memories of that fascinating clash, as well as her thoughts on what promises to be an exciting 12 months ahead for the reigning World, European and FIH Hockey Pro League champions.

FIH: Thanks for talking to us Caia! We can tell you that the Netherlands 3-1 victory over Argentina in Buenos Aires at the start of the year has been voted by the fans as the second-best match of the FIH Hockey Pro League in 2020. What is your reaction to that news?
Caia van Maasakker: It’s really great news, of course! It is really cool that the fans voted for us, and that we came second. It was an awesome game to play.”

FIH: It’s always nice when the fans react positively. They clearly enjoyed it – did you guys enjoy it on the pitch?
Caia van Maasakker: Yes, we definitely enjoyed the game. It’s always [great] to play in Argentina; they are always good games.”

FIH: The match was the second game in your double header against Argentina, with Las Leonas claiming a 2-0 victory in the first game, but you responded brilliantly in Match 2. What was different about the second game for the Netherlands?
Caia van Maasakker: “We came into the second game having lost [the first], and I think everybody was really focussed. It was the end of a long campaign for us in Argentina, so everybody wanted it to have a positive ending. We wanted to go ‘full out’, and I think we played a good game.”

FIH: You were 1-0 down for a while in the game, but Frederique Matla levelled the scores on the stroke of half time with Yibbi Jansen and Kyra Fortuin scoring third and fourth quarter goals to seal victory. Was anything said at half time that might have inspired you and your team to push on and take that win?
Caia van Maasakker: “Well, I don’t remember the exact words, but I know that we scored just before half time, to make it 1-1 and I think that gave us a boost. It was ‘okay guys, let’s make that fist now and just go – we know we can take them on and score the goals to make the difference’. I think we had played well but just hadn’t scored [enough], but it resulted in a victory in the second half.”

FIH: What is like playing in Argentina in front of those passionate fans? Can you remember about the atmosphere in Buenos Aires on that day?
Caia van Maasakker: “I remember that it was pretty full, and I always love playing in Argentina because they make a lot of noise, they are there, and there is a lot of passion. In that game there was a storm in the first quarter, and the match was stopped for quite some time. We were all wondering if the match would continue or not! In the end, we did [continue playing] and we were really happy about it, of course. There were still a lot of fans who stayed there, enduring the storm to watch the match.”

FIH: It was a terrific game, even with the delay. Looking ahead to 2021 when hockey resumes, whether it’s the FIH Hockey Pro League or the Olympics later in the year. Can you tell us how the team preparations are going?
Caia van Maasakker: “They are going, but it is different than you would expect at the beginning, of course. There are a lot of scheduling changes and we normally have [both] the national team and club hockey, but club hockey was postponed because of the pandemic. But we were lucky enough to be able to train with the national team, so we have been doing that for the past few months, playing some games against each other every Sunday. We tried to create a match to improve and get better, and I think we are doing that. At the moment we have a few weeks off, so we are just training individually. That involves a lot of running outside and doing some strength training. That is going well and is, of course, very important to be able to do.”

You have now been part of the Netherlands set-up for nearly ten years, having played 196 matches during that time. What is it like being part of this particular group? You clearly seem as motivated as ever to keep pushing on, but it seems like a very special group of players that you are working with currently.
Caia van Maasakker: “It definitely is, but it has always been the case with the Netherlands. We always have a great group of people who want to go to the max every time, putting the bar even higher for the next game to improve. That hunger, that motivation to improve is there, and it is also a must, I think. I really love that about this sport and this team, that we have got this together. Everybody wants to play their best, to play their heart out in the games, and we are really looking forward to being able to do that again.”

FIH: Well, thank you so much for joining us today. Very best of luck for everything in 2021, and congratulations on finished second in the Best Match fan vote.
Caia van Maasakker: “Thank you very much!”

We will reveal who the fans have selected as the best FIH Hockey Pro League match of 2020 on Friday 18thDecember.

Don’t forget to download the Watch.Hockey app, where you can find the latest news and interviews as well as action replays and highlights. Simply search Watch.Hockey in the App Store or on Google Play. A desktop version of the app is available at www.watch.hockey.