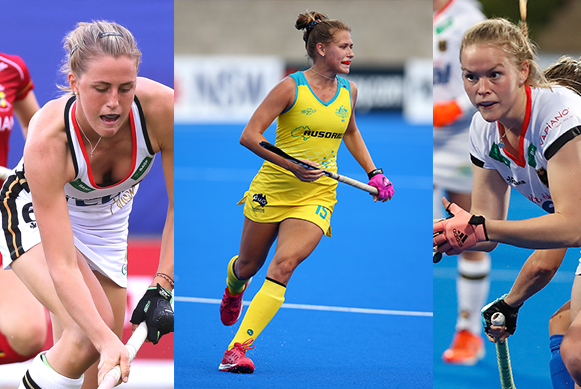 Hockey is renowned as a family-orientated sport. Many a current hockey player will say that their love for the game started at an early age as they watched their parents playing the sport. It is almost as if hockey becomes part of their genetic make-up.

Overtime, roles reverse, and the parents become spectators as their child moves through the junior teams to become an adult hockey player. And while every child moving into adulthood wants to make their own pathway, it is still reassuring to get occasional words of advice from someone who has been there and understands the challenges and demands.

As we move into a busy year of international hockey, with FIH Hockey Pro League, continental qualifiers, and of course, the rescheduled Tokyo 2020 Olympic Games, it is a good chance to recognise the family support that many of this year’s players will be able to tap into.

When Pauline Heinz pulls on the shirt for the German national women’s team, her mother Bianca is certain to feel a nostalgic twinge, alongside enormous pride. Pauline is one of the most exciting talents to be emerging in time for the delayed Tokyo 2020 Olympic Games and all eyes will be on her performances in the FIH Hockey Pro League in the coming months.

Her mother, Bianca Heinz (nee Weiss) knows what it is to be a member of Die Danas. She was goalkeeper for the German U21 squad and in that role she won the European Junior Championships in 1984 and was part of the winning team at the Junior World Cup in 1989. The two Heinz’s played together for a short period in the 2019 Bundesliga when Bianca made a brief comeback for Rüsselsheimer RK.

Another player whose family name is creating a burgeoning hockey dynasty is striker Pia Maertens. Her mother is Susanne “Susi“ Maertens (former Wollschläger).

If Pia wants advice on handling the pressure of the Olympics, then Susanne would be the ‘go-to’. A three times Olympian (1988, 1992, 1996) with a silver medal at the 1992 Barcelona Olympics, Susanne was also a silver medalist at the 1986 World Cup. These days she can be found coaching at the Bundesliga team Club Raffelberg.

The hockey genes continue with Pia’s aunt, Gabriele Schöwe (former Schley). Gabriele was an attack-minded midfielder who represented Germany at the Los Angeles and Seoul Olympics. Germany, playing as West Germany won silver at the 1984 Olympics.

Also playing at the 1984 Olympics and coming home with a bronze medal was Brenda Hoffman (nee Stauffer). Brenda was part of the successful USA women’s national team, and 37 years later her daughter Ashley Hoffman, who captains the current USA team, is following in her mother’s footsteps.

Across the border in Canada, 20-year-old Anna Mollenhauer is the daughter of Nancy Charlton-Mollenhauer, who was inducted in the Field Hockey Canada Hall of Fame for her career with the Canadian Team in the 80s. Among Nancy’s achievements were appearances at the 1984 and 1988 Olympic Games, a silver medal at the 1983 World Cup, followed by a bronze medal four years later. Nancy also won bronze at the 1987 Pan American Games and was the Canadian Team Flag Bearer at the 1987 Pan American Games. With 20 caps to her name, Anna is on her way to emulating mum’s achievements.

Hockey-playing family dynasties are also in evidence in the Netherlands.

Marjolijn Bakker represented the Netherlands on 32 occasions from 1968-1972. Her daughters Hanneke and Minke Smabers both had long and distinguished careers in the Oranje. Hanneke played international hockey from 1993-2001, earning 127 caps, while Minke became the Dutch record holder with 312 caps, representing the Netherlands from 1997-2010. Among the medals that the Smaber sisters collected over their playing careers are Olympic bronze (Sydney 2000), silver (Athens 2004) and gold (Beijing 2008), World Cup gold (Madrid 2006)and a host of other titles.

All three of Jeanneke van Kessel-van 't Hek’s children have gone on to represent the Netherlands. Jeanneke herself played for her country 12 times from 1967-69 and her daughters Lijsbeth and Lieve won two and 68 caps respectively. Their brother Benjamin also played for the Netherlands, winning four caps in 2005.

Throughout the ‘70s, Maria Mattheussens-Fikkers was a regular on the team sheet as she collected 69 caps for the Netherlands. For four years from 2008-2012, her daughter Marieke Veenhoven-Mattheussens was part of the Dutch team, winning silver at the 2010 World Cup in Rosario.

In Australia, one of the most famous Olympians is Nova Peris, who competed in two Olympics events – winning gold with the Hockeyroos in 1996 before switching to sprinting at the 2000 Sydney Olympics. Nova was also the first Aboriginal Australian athlete to win an Olympic gold medal. Her niece, Brooke Peris will be looking to emulate her aunt at the Tokyo 2020 Olympic Games.

Another current Hockeyroo, Kaitlin Nobbs is the third generation of a hockey-playing dynasty.  June Harding, who later became June Haines and then June Capes is the mother of Lee Capes and Michelle Hager, both of whom represented Australia. Kaitlin is the daughter of Lee Capes and her former husband Michael Nobbs. June’s sister, Shirley Tonkin (nee Haines) is also a former Hockeyroo.

As international stars across the world prepare for a big year of hockey, there will undoubtedly be some words of wisdom passing from one generation to the next.