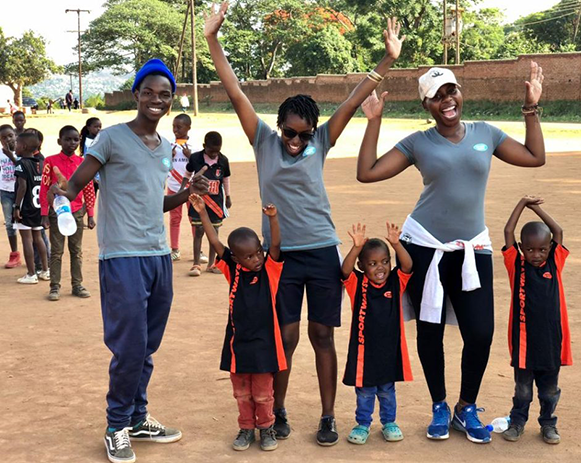 More than hockey in Malawi and Zambia

The past few months have been all about taking opportunities to play and train when it is possible. Around the world, the pandemic has put a halt to many hockey activities and training camps, but whenever a window opens, it has been exhilarating to see how swiftly coaches and organisers have sprung into action to make sure that our sport can take place in a safe environment.

What has also been great to see is how the camp organisers have taken on the responsibility of emphasising the importance of hand sanitising, wearing face masks and looking after each other in the face of the pandemic.

The first camp was in Lusaka, Zambia, where the kids training camps are supported by Wings of Support. The team of 10 coaches and volunteers put on a two-day hockey clinic for almost 100 children. Among the skills covered were protecting the ball while it was in your team’s possession and defending skills when the opposition were in attack.

In line with the Hockey Dreams Foundation emphasis upon teaching life skills, the coaches linked the hockey concept of defence with the life skill of self-protection and defending what is rightfully yours. Throughout the clinic, the children were asked to provide feedback on the activities and also to share their own life experiences. In this way, the children learn empathy and understanding, particularly when listening to someone from a different background or culture.

The camp in Blantyre, Malawi was supported by the KNHB, the Netherlands national hockey association. It took place at the Kapeni Demonstration School and all the children were collected by coaches and driven to the camp. The theme of this particular camp was ‘Stay Safe’ and, before the activities started, all the children used hand sanitisers and had their temperatures checked in line with Covid-19 precautions. One of the coaches also gave a talk on the importance of wearing masks and regular hand-washing.

It was also emphasised that regular hand washing is also important in the battle against other diseases such as HIV?AIDS, Malaria and Cholera.

A team of eight coaches and two volunteers ran the activities, with nine groups and one coach overseeing everyone. The morning training session covered many basic skills and hockey concepts. Then it was all about match play. The camp ran for two days and, in that time, all nine teams played each other in a really competitive environment.

One of the coaches reported: “The overall vibe was great, the kids had so much fun and it was exciting to see them enjoy the sport which was one of our primary goals for the camp.”

At both camps, the children were also fed wholesome lunches, with rice, chicken and bananas the popular food on offer.

By combining sport and physical activity with underlying messages of safety, health and cooperation, these hockey camps are playing an important role in improving the health and life chances of the participants.

Both the camps mentioned here were mixed camps. Within the Hockey Dreams Foundations offering in Malawi, Uganda and Zambia, there are three different types of camps: Girls Only, which offers single under camps for girls aged 6-15 and also deals with issues of health and how to look after themselves; Mixed Camps for children for whom this type of camp is deemed appropriate; and Super Junior Camps for mixed genders 5-10 years.