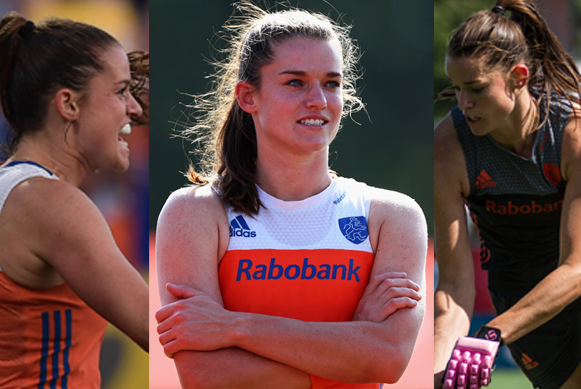 Just thirteen matches into her fledgling international career with the Netherlands, Lidewij Welten became the proud owner of the most coveted prize in world sport – an Olympic gold medal. The occasion was the Beijing 2008 Olympic Games, with the Oranje’s 2-0 gold medal match defeat of China taking place on 22 August, a mere 37 days after Welten’s 18th birthday.

Over the 12 years that have followed, Lidewij Welten has earned the reputation as one of the most exciting, unpredictable and potent attacking players on the planet, helping the Netherlands to win every major title not just once, but on multiple occasions. As well as being a double Olympic gold medallist – she was part of the Netherlands’ successful title defence at the Olympic Games London 2012 – Welten is a double World champion (The Hague 2014, London 2018), a four-time European champion (Amstelveen 2009, Mönchengladbach 2011, Amstelveen 2017, Antwerp 2019) and an FIH Hockey Pro League champion, not forgetting that she was crowned FIH Player of the Year in 2015 and Best Player at the Vitality Hockey Women’s World Cup London 2018.

Whilst it is staggering record of achievement for this outstanding forward, the 29-year-old’s story is far from complete. With 212 caps and 87 goals to her name, Welten – who has also won 12 national titles and 11 European titles with Den Bosch since making her club debut in 2005 – has made a huge contribution in keeping the Netherlands top of the FIH World Rankings since 2011. She remains fully focussed on winning as many prizes as possible in the years ahead to keep that remarkable record going for as long as possible.

Lidewij Welten talks to FIH about her remarkable career and those who have influenced her, as well as giving some words of wisdom to any young players out there who want to get the most out of their hockey.

Hi Lidewij, thanks for talking to us. How do you reflect on your extraordinary career to date, and what keeps you motivated to remain at the very top of the sport?
Lidewij Welten: “I am very proud of my career, and I really enjoy it. The places I’ve been to, the things I’ve been through, they are memories for life. Knowing that there is still so much left in me, and I can still grow as a person, that is what keeps me motivated. I just want to keep winning prizes, that is what I like!”

Who or what first influenced you to pick up a stick and play hockey?
Lidewij Welten: “Well, actually my brother and sister did. I’m the youngest of three, and they played hockey, so I was the youngest at home and wanted to do everything they did. That is why I wanted to play hockey as well.”

How would you best describe your playing style or attitude on the pitch?
Lidewij Welten: My playing style or attitude on the pitch in one word would be ‘stubborn’. I always try to do what people don’t expect, which is where my creativity comes from. I don’t really like it when people tell me exactly what to do, I want to be creative and do whatever I feel [is right] at that moment.”

The ongoing COVID-19 global health crisis has had a profound effect on every aspect of life, sport included. We understand that certain aspects of hockey have resumed in the Netherlands. Can you tell us what you have been able to do recently?
Lidewij Welten: “Due to COVID-19 our competition has been cancelled, so in the beginning we had a running schedule which we could do from home and at-home gym work-outs, which we could do in the living room or the garden, or nearby your house. [For the last] couple of weeks we have been training again, which felt really good to stand on the pitch again - we really enjoyed it. We do have to use the 1.5 metre [social distancing rules], but hopefully we can go to games soon again. That would be really nice. We train at this time around three or four times [per week] with the national team, and one time with the club.”

Finally, you have been fortunate to be part of some wonderful Netherlands teams during your 12-year career, and the side assembled by Alyson Annan is something truly special. What is it like to be part of this group, and what do you think the side is capable of achieving in the next few years?
Lidewij Welten: “Being part of this group is really special. I think we have been on top of the world [rankings] for the last ten years maybe, which is really amazing. Even though big names stop [playing], the talent keeps coming and that is really amazing to see. So, I think, if the older ones are going to stop again, I think the young girls are really ready to take their place and be on the top of the world for the next couple of years.”