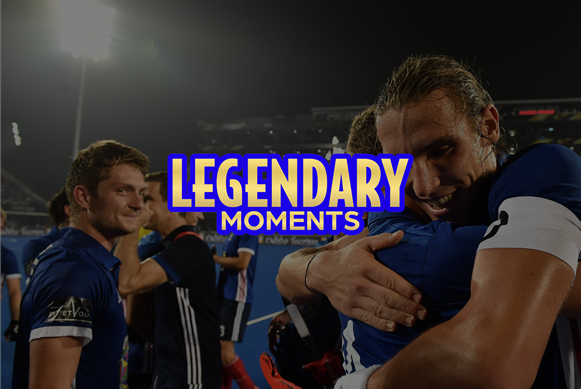 In the latest of our Legendary Moments series, we re-live arguably the biggest upset of the Odisha Hockey Men’s World Cup 2018 in Bhubaneswar, where 20th ranked France recorded a stunning 5-3 victory over Argentina, the reigning Olympic champions from Rio 2016.

It was a crucial win that kept France in the competition, with the team going on to take an eighth-place finish in their first FIH Men’s World Cup since Lahore 1990.

France captain Victor Charlet spoke with FIH about that epic encounter against Los Leones, and how the experience of competing at against the world’s best in Bhubaneswar will help his side in their preparations for the home Olympic Games of Paris 2024.

A full match replay of that enthralling contest is available for all fans on the Watch.Hockey app.

Hi Victor, thanks for talking to us! France hadn’t been to an FIH World Cup since 1990, so simply qualifying for the competition itself must have been a big moment for your team.

Victor Charlet: “It was really a big performance to get to the World Cup, because France was not a big country in the world of hockey. Just to be at the World Cup was a big achievement. When we knew we had made it, the team was very happy. The dream came true, yes.”

You started well, losing narrowly to New Zealand (2-1), but then drew with Spain (1-1). Both teams were higher ranked, so confidence was clearly growing ahead of that clash against Olympic champions Argentina. What was the mood like ahead of the Argentina match?
Victor Charlet: “We were very disappointed about the result against New Zealand, because we thought we were the better team. The second game [against Spain], 1-1 was a good result. It was a good start to the competition, but with only one point we needed to win the game against Argentina to have a future in the competition. The spirit was that we win, or we die, so we were veery focussed on the game. There was a lot of pressure, but the team was confident.

Whilst you handled the pressure extremely well, no-one would have foreseen what was to come. The match itself was incredible, with the second quarter being unbelievable. It was 0-0 at the start of the quarter, and by the end it was 4-1 to France, and you had got on the score-sheet. What are your memories of that quarter of hockey?
Victor Charlet: “The game was crazy in all the quarters, really. The second quarter was maybe the best. The Argentina team were perfect for us because they [played open hockey], which we like because we have some crazy men in the team, and we play quickly. The second quarter was goal after goal after goal. It was weird, like a dream. We are in the World Cup against Argentina, and it was really crazy! As a defender, you watch your strikers and midfielders creating, doing their skills and scoring some goals, and it was crazy to see that.”

You deserved that 4-1 lead at half time, but in a contest against the Olympic champions, it was always going to be tough. Argentina came out strong in the second half, scoring goals in the third and fourth quarters through penalty corner expert Gonzalo Peillat to take the score to 4-3. Did you start to feel any nerves?
Victor Charlet: “It’s hard in hockey when you are winning by a lot of goals. In your head you think that you don’t need to score, but you have to try to stay positive and continue to attack, I think. If you take football, if you are winning by three goals you can say, ‘ok, I put the bus in front of the goal and we can win’! In hockey, it is impossible because the game is too quick, and with penalty corners [the score can swiftly change], especially with Gonzalo Peillat. In the locker room, the team and the coach were really calm, and the spirit was that we continue to attack. When the score was 4-3, I think the team still stayed humble and calm, but in our heads, I think we were a little bit nervous. However, with the experience and the cleverness of the team, we did win the game, finally! We started the World Cup with maybe the youngest team in the competition, and it was the first World Cup for all of the players. To win against the Olympic champions and reach the cross-overs of the World Cup, the feeling was perfect.  It was an achievement for all of the players. As a French hockey player, it is not always easy because the sport is not professional in France. This victory was a big achievement for all of the team and French hockey.”

The story did not finish there, with France defeating China in the cross-overs to reach the quarter finals. Placed number 20 in the FIH World Rankings, France were now guaranteed a top eight finish. You fell to defeat against Australia in the quarter-finals, but with an eighth place finish in the World Cup, you must have been so proud.

Victor Charlet: “We are very proud of the result. Before the World Cup, our team goal was to finish in the top eight, but it was a big goal. We never spoke about it [publicly], but in our team before the competition, that was our goal. Against Australia, it was a big game, with big pressure to play against one of the best teams in the world. I think 3-0 was hard on us because we played well, but it was a pleasure to play this game.”

Sadly, France did not quite make it to Tokyo, suffering a narrow defeat to Spain in the 2019 FIH Hockey Olympic Qualifiers. However, we are just three years away from the Olympic Games Paris 2024. How do you think the experiences in Bhubaneswar has helped your group as you prepare for a home Olympics?

Victor Charlet: “It was a bad experience to not [qualify for] Tokyo, but I think the team is really focussed on Paris. It is a big opportunity to play the Olympics and show the world of hockey that France is already here. With the World Cup, now we know the highest level of world hockey is close to us. At the beginning, we said ‘we are not far away’, but when you play a World Cup, you watch the other teams. All the details are huge to work on, and now we know how to work and the points of work that we have to do. I think with that experience, the group is really ready to work for the Paris Olympics, and we are very happy to play an Olympics at home.”