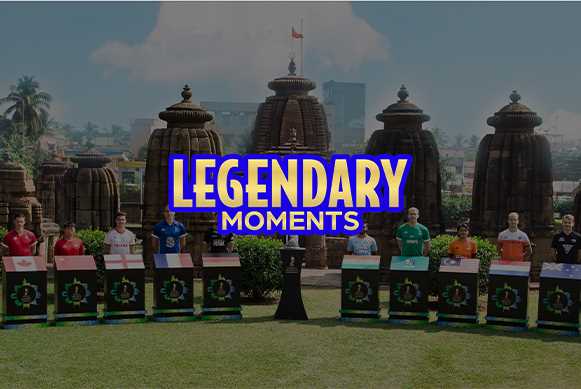 Learning from the hurt

In part two of our player interviews ahead of this week's Legendary Moments, we continue to talk to India's long-serving goalkeeper PR Sreejesh and world class striker Lalit Upadhyay about the opening match of the Odisha Hockey Men's World Cup 2018. Although both players have a heap of experience at the highest level of the game – this was Lalit's second World Cup and Sreejesh's third – there was added pressure for this event as it was on home turf, in front of packed stadiums of fans.

In the first half of the interview, we heard how emotional and nerve-wracking it was for the players as they prepared to take on South Africa in the opening match of the World Cup. As Lalit says, "words can't really describe how you feel when you are on the pitch and the national anthem is playing and 15,000 fans are watching and cheering you on."

Hockey India won that match 5-0, with Lalit scoring the fourth. They went on to win their pool and didn't lose a game in the process. A 2-2 draw with the world number one side Belgium was a highlight of their pool games. This led them to a semi-final contest against the Netherlands.

In that match, India took an early 1-0 lead with a goal from Akashdeep Singh but the Netherlands bounced back with two goals from Thierry Brinkman and Mink van der Weerden. As Sreejesh talks about that match, the raw hurt is still very much in evidence. However, he adds, the team learnt a lot from the experience, including how to perform at their best in a highly pressured environment.

It is this sort of learning experience that Sreejesh and Lalit hope will allow India to reach the podium at the rescheduled Tokyo 2020 Olympic Games, and reignite India's proud record of achievement at the Olympic Games.

You can watch the part 2 of this two-part interview and the best moments from the 2018 FIH Men's Hockey World Cup's opening ceremony and the highlights of India's first match versus South Africa here.