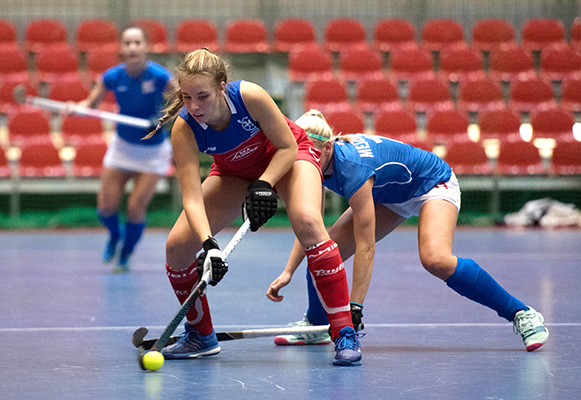 2018 was a year that Namibia’s Kiana-Che Cormack will never forget. At just 16 years of age, she was selected to represent her country at the FIH Hockey Indoor World Cup, a magnificent event that drew huge crowds to the Berlin’s Max Schmeling Arena. She was far from overwhelmed by the experience, scoring a remarkable nine goals in six matches to finish as the tournament’s joint-highest scorer, a prize she shared with Ukraine’s Yana Vorushylo.

It was a dazzling achievement for the youngster, who registered goals against Czech Republic (1), Australia (3), Ukraine (1), Russia (2) and USA (2) to help the 14th ranked Namibians to a ninth place finish, bettering the 10th place achieved at the Poznan 2011 event, which was their only other appearance in the competition.

Later in the year, Cormack enjoyed another wonderful hockey experience, captaining Namibia’s under 18s team in the Hockey 5s competition at the 3rd Youth Olympic Games in Buenos Aires, Argentina. Their stand-out result was a 4-3 victory over Australia, with Cormack scoring twice in the contest. Namibia eventually finished the competition in eighth position, above Uruguay, Zimbabwe, Mexico and Vanuatu.

In an interview with FIH, the now 18-year-old reflects on that incredible breakthrough year whilst also talking about her ambitions for the future.

Hi Kiana, thank you for talking to us. You captained Namibia at the 2018 Youth Olympic Games in Buenos Aires. Tell us about your memories of that amazing experience in Argentina.
Kiana-Che Cormack: “The Youth Olympics is a once in a lifetime opportunity, and I think anyone that gets to compete at that level would definitely agree with me. Not many people know this, but a Namibian hockey team had never qualified for the Youth Olympics, so this was a huge milestone for our country. From being in the [Olympic] Village to going to the field where we actually compete, every moment is just amazing and incredible. It is something that you cannot really describe to someone who hasn’t been there. Especially for the hockey players – I’m sure that other countries can agree – being in Argentina, where hockey is such a famous sport, it is probably the best atmosphere that you can play in, with the crowd and all the support going around. I loved every single minute.”

Representing your country at a Youth Olympic Games is a huge privilege for any young player. What did it mean to you personally, and also your family?
Kiana-Che Cormack: “I actually get asked this question quite a lot! Anyone that goes to the Youth Olympics is going to say that it is one of the biggest privileges that an athlete can have. Especially being from a small African country – it is not something you can achieve every day, so you have to take the chance when you get it. For us to qualify and personally captaining the team through that, we were such a close unit, it is something I always wanted to do. I mean, I have goals to play at the highest level of hockey when I’m a bit older, and that was just another stepping-stone – it helped me gain so much experience. When it comes to how it felt for my family, my mum, Shayne Cormack, was the coach of our under-18s Hockey 5s team, so it was a goal of ours since I was young to go to such a prestigious sports event. For us to experience that, to go through it together, was something quite special that no-one can take away from us. My family has been involved in Namibian hockey for years, so this was another really important moment that we got to experience together, and I’m really grateful for that.”

Due to the ongoing COVID-19 global health pandemic, it was recently announced that the Youth Olympic Games in Dakar, Senegal has been postponed to 2026. What are your thoughts about this, and how important do you think the 2026 event will be for Hockey in the African region?
Kiana-Che Cormack:  “I was heartbroken when I heard that thy had postponed the Youth Olympic Games to 2026, not because it had any personal effect on me, but more for the generation of athletes that aren’t going to be able to experience going to the Youth Olympics. It was probably the only chance they were ever going to get. I know for a fact it was going to be one of Namibia’s strongest hockey generations, so I was looking forward to seeing how well they were going to do, if they had qualified for the Youth Olympics. Unfortunately that chance has been stolen from them, and I really am upset for each and every one of those players. However, there is going to be another one in 2026, which I am again excited to see, because in Africa we don’t have the strongest club hockey levels, so for us young hockey players to be exposed to a high level of playing, the only chance we really have is when we qualify for iconic events such as the Youth Olympic Games. So, whenever we get the opportunity, we always try to take it and make the most of it. Yes, there is going to be a generation that will be missing out on that, but the next generation is going to be even more talented and ready to take that opportunity, so I’m very excited to see how that works out.”

At the FIH Indoor World Cup 2018 in Berlin, you finished as joint top scorer with nine goals - a remarkable achievement for a 16-year-old. What are your memories of that competition?
Kiana-Che Cormack: “I don’t think anyone expected me to win that award, especially being the youngest player at the tournament and playing for a small country that has only every qualified to compete at the [Indoor] World Cup once before. It was a shock to everyone, and I could not believe it. But at the end of the day I have to give all the glory to God, because it truly was a miracle. I don’t know how I would have achieved something like that without him. The [Indoor] World Cup is a very intimidating and overwhelming experience, and the atmosphere is just incredible. Even just getting the opportunity to play at a tournament like that at the age of 16 is, yet again, a once in a lifetime experience. I remember playing my first game against Czech Republic and I scored my first goal. It was also the first goal for the team. I could have ended the tournament there – I was ecstatic, I was over the moon and I could not believe that I had even scored! But, as the tournament went on, I grew more confidence and the goals were coming naturally, which was the biggest blessing I have ever received. I am really thankful for that.”

What is your biggest ambition with the Namibia team in the coming years?
Kiana-Che Cormack: “Right now, my biggest ambition for the women’s team is to qualify for the next [outdoor] World Cup, so that we can compete there and improve our ranking. Obviously, these times during the pandemic are really uncertain and we don’t really know what is going to happen next, so I cannot look too far ahead. I can only focus on the next step, which is the qualifiers. I’m just going to trust god’s timing – I know that it will be revealed, and I’ll take it from there.”