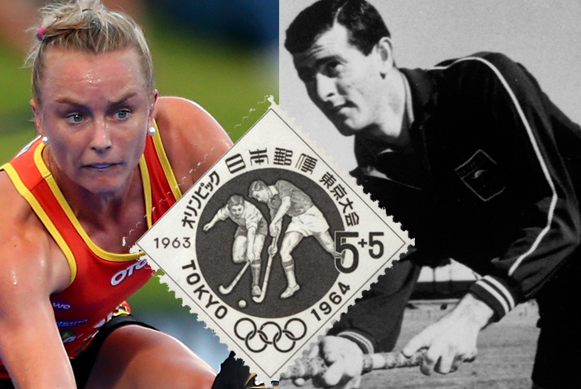 Having played over 180 times for Australia since making her senior international debut in 2013 and competed at two World Cups, two Commonwealth Games, the FIH Hockey Pro League and the Rio 2016 Olympic Games since then, 27-year-old Hockeyroos midfielder Jane Claxton is certainly not lacking in experience.

However, one thing that she cannot currently claim (until July 2021, at least) is to have represented her country at an Olympic Games staged in Tokyo, Japan. That accolade is currently reserved for those rare few who took to the field at Tokyo 1964, one of whom Claxton managed to catch up with in Perth, Western Australia just a few days before this year’s Olympic Day celebrations on 23 June.

At 78 of age, triple Olympian Don Smart is a man who still absolutely loves his hockey, turning out on the grass pitches at the Perth’s Perry Lakes recreation ground for the Saturday Masters Competition. A pacey and skilful left-sided striker in his day, Smart represented Australia with distinction at the Tokyo 1964, Mexico 1968 and Munich 1972, winning bronze in Tokyo and silver in Mexico – Australian hockey’s first Olympic medals of either colour.

Between 1961 and 1972 he played close to 100 games for his country and, according to his Hall of Champions biography on the Western Australian Institute of Sport Website, scored what must be one of the fastest goals by an international debutant in history, finding the target just 20 seconds in to an Oceania derby match against New Zealand at the tender age of 19.

With Jane Claxton based in Perth - the location of the training base for Australia’s national teams – and Don Smart being a long-time friend of the Claxton family, the two Australian Olympians from very different generations came face-to-face for a brief conversation, rather fittingly, just moments before the septuagenarian striker took to the Perry Lakes grass for a veterans match.

Jane Claxton: “Hi everyone, I’m Jane from the Hockeyroos. I’m here with Don Smart, who is a three time Olympian, and today I’m going to be interviewing him about his career to date and what has changed over the years. So, Don, which Olympics did you go to?”
Don Smart: “Tokyo 1964, Mexico 1968 and Munich 1972.”

Jane Claxton: “Great! And which Olympics out of those three do you think left the biggest impression on you?”
Don Smart: “The first one! When we got announced [named in the squad], it was a huge honour. And then we won a medal, which we weren’t supposed to do.”

Jane Claxton: “It’s ironic that Tokyo [2020] was meant to happen this year. It’s definitely a mix up from what the norm is, going into a five-year cycle for the Olympics. I guess in terms of your career to date, what made you stop playing hockey?”
Don Smart: “I haven’t stopped, I’m still playing masters! I enjoy catching up with all the fellas I used to play with.”

Jane Claxton: “Back in the day, when you were playing ‘professional’ hockey, was it on turf or grass?”
Don Smart: “Oh, we weren’t playing professional hockey! I had to give up a couple of jobs to go to the Olympics. I got picked to go to the Olympics and I asked for leave, and they [the boss] said ‘I’m sorry’, and I said, ‘so am I, see you later!’”

Jane Claxton: “So there is a pretty big generational difference between [you and] us international athletes now. Back in the day, you used to have to juggle a full-time job as well as training to go to the Olympic Games. And you still won a medal [in Tokyo], which is impressive.”
Don Smart: “We were lucky we won the medal, I think. We had a very good team and we played really well. We were overjoyed when we won it, I couldn’t believe it – I didn’t take it off for a week!”

Jane Claxton: “I wouldn’t either! So, what was the highlight of your entire career?”
Don Smart: “I think getting picked for the first time, for WA [Western Australia]. I played golf with a bloke and I took his place [in the team] because he broke his collar bone. I was on the bench before then. I still play golf with him now, but he has never forgiven me for not giving his position back!”

Jane Claxton: “We are down here for the Saturday Masters Competition at Perry Lakes. Can you give us a bit of an outline about what is going to happen? How do you guys divide into teams and how do the fixtures work?”
Don Smart: “Well, we are veterans, so we go from 65s and upwards. It’s just organised for everyone to get together and have fun, and we do. We pick the teams based on who is coming, we don’t play with the same teams, we have different guys every week. We cannot have bragging rights!”

Jane Claxton: “And what position do you play these days?”
Don Smart: “Oh, I just play high as I can!”

Jane Claxton: “Oh, hanging in the circle?”
Don Smart: Yes, so I don’t have to run back!”

Jane Claxton: “That is a perfect position to play! So, what would be your advice to someone like myself, heading into an Olympic Games?
Don Smart: “I think you just need to enjoy yourself. Give it everything you’ve got. You never know, you might get lucky!”