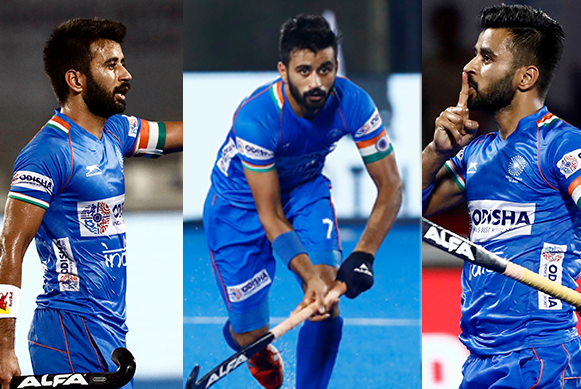 Being captain of one of the most iconic sports teams in a country containing 1.3 billion people - nearly a fifth of the world’s population - it is hardly surprising that Manpreet Singh takes his leadership role with the India men’s hockey team very seriously indeed. It is a high-profile position that comes with great responsibility, intense scrutiny as well as a considerable weight of expectation, with millions of Indians desperate to see the eight times Olympic champions dominate the sport once again.

Judging by the team’s most recent displays, it seems that those fans have every right to believe that a major title could be just around the corner. In 2012, a time when a teenaged Manpreet was fighting to establish himself in the senior team, India’s men were sitting 12th in the FIH World Rankings. Eight years of steady progress later, they are up to fourth, their highest placement since the rankings were introduced in 2003.

Before the COVID-19 global health crisis brought the competition to a halt, India’s home performances in this season’s FIH Hockey Pro League certainly impressed many onlookers. In Bhubaneswar’s Kalinga Stadium, Manpreet’s team claimed a superb win against reigning World and European champions Belgium, as well as a shoot-out triumph over second-ranked Australia and a fine 5-2 victory against the Netherlands, who are ranked third.

Manpreet, now 27 and the FIH Hockey Stars Player of the Year for 2019, has been captain of the team since June 2017, taking over from the great Sardar Singh. Manpreet cites Sardar as a hugely influential figure who taught him a lot about how to be a good leader, with European legends Moritz Fürste and Barry Middleton - the respective former captains of Germany and Great Britain, who Manpreet competed alongside in the Hockey India League – also being outstanding role-models in the art of captaincy. The two time Olympian – who, like his footballing idols Cristiano Ronaldo and David Beckham, wears the number iconic number seven playing shirt – has set his sights on guiding his team to a medal at the delayed Olympic Games Tokyo 2020, which will take place in 2021.

Speaking to FIH from the Sports Authority of India (SAI) in Bangalore – where the men’s and women’s national team athletes are following individual training plans in their rooms, being monitored online by their coaching staff – India’s inspirational captain talks to FIH about his career, ambitions and those who have had a major influence on his life as an international hockey player.

Hi Manpreet, thanks for talking to us. You have enjoyed some wonderful times with India’s national team competing at two Olympic Games, winning an Asian Games gold medal, becoming captain of your country and, most recently, being named the FIH Hockey Stars Men’s Player of the Year for 2019. How do you reflect on your international career so far, and what is your biggest future ambition with the India team
Manpreet Singh: “I would not have been able to do it without the support of my team-mates and the coaching staff. I’m here today just because of them. My biggest ambition as a captain and player is winning a medal in the Olympics, for the nation.”

Who or what first influenced you to pick up a stick and play hockey?
Manpreet Singh: “My two elder brothers played hockey when I was a kid, and the second is former India hockey captain Sardar Purashkar Singh.”

Who has been the biggest influence on your career and why?
Manpreet Singh: “As for now, I would say Cristiano Ronaldo. There are so many things about him that I admire. One of which is never giving up in anything you do, and to keep pushing yourself to be the best.”

How would you best describe your playing style or attitude on the pitch?
Manpreet Singh: “I would say that, when [India] play, everyone is a captain in their own way, but I will always have to lead by example, especially for the junior [players]. Getting the chance to play with Moritz Fürste, Barry Middleton and Sardar Singh, I have learned a lot about how to be a positive and supportive captain.”

What moment on the pitch are you most proud of and why?
Manpreet Singh: “It would be the Asian Games 2014 [Incheon, KOR] when we won our gold medal. Second, as a captain, it would be the Asia Cup 2017, where we also won a gold medal in Dhaka [BAN].”

What have you been doing to stay active and healthy during the ongoing COVID-19 global health crisis?
Manpreet Singh: “Besides playing FIFA on the PlayStation, I’ve been doing my own personal training, recovery and gym work [in my room], being monitored [over the internet] by our trainer using the [personal] schedule given.”