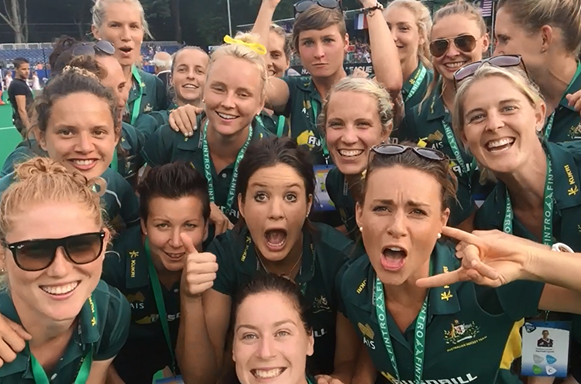 Australia's Hockeyroos have started their own 'Roovolution'

The success of Australia men’s and women’s hockey teams has inspired thousands of people around the world in recent years. But now their efforts off the pitch are also beginning to prove extremely effective in engaging new fans of the sport.

One of their key campaigns is the ‘Roovolution’, launched by their women’s team, the Hockeyroos, shortly before the 2014 Hockey World Cup.

With the Australian sports landscape dominated by the likes of rugby, golf, tennis, Aussie Rules Football, cricket and soccer, competition to attract youngsters into any sport is extremely difficult.

The Hockeyroos have stepped up to the challenge and through their unique social media campaign, the Roovolution is certainly gaining momentum.

The Roovolution hashtag is open to interpretation - whether it’s a take on ‘revolution’ or ‘evolution’. Either way, it’s getting more people talking about and involved in hockey.

The hashtag collects all of their content into a topic, which makes it easier for fans to find news, photos and videos of the team on the various platforms.

There, the team and players post behind-the-scenes photos of their preparations and on field action as well as their experiences off the pitch. Their fans also contribute via messages of support for the Hockeyroos as well.

Its success has been driven by the fact that it’s their own creation. The hashtag is used exclusively by the women’s team and represents their collective personality. Speaking of this, Hockeyroos hero Ashleigh Nelson, said: “Roovolution has been so successful because of the ownership of the hashtag that we have. It was created by and pushed into the social media sphere by the players. This ownership mentality is something that we are trying to embed within our training culture too.”

The campaign was particularly effective during the Glasgow 2014 Commonwealth Games, where a series of print-out posters that people could pose with and upload to social media proved popular.

The team also reached out to their networks across Australia to get celebrities to join the #Roovolution, including various sporting stars such as top jockeys, football players and media personalities. Such endorsements created a contagious buzz which helped them grow their following.

So far, the #Roovolution has attracted more than 1,800 posts on Instagram alone, with the majority linked to the girls and the Hockeyroos.

Their campaign is certainly proving popular, acting as an inspiration for the next generation not only in Australia but around the world.

Additionally, their campaign also serves as an example to others who may be looking for ideas to help engage more people in the sport of hockey in their country.

As the Roovolution continues to grow, it is hoped that through such activity and continued on-field success, many more people will get involved in hockey thanks to the Australian Hockeyroos.

You can join the Roovolution by visiting any of these sites: