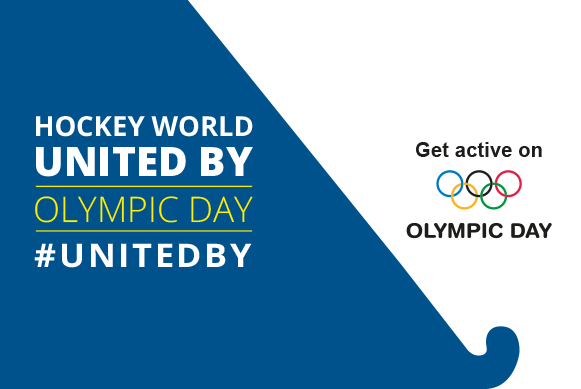 Find out how the hockey world has been #UnitedBy Olympic Day

On 23 June 2018, the hockey world will celebrate the 70th anniversary of Olympic Day by embracing the International Olympic Committee's (IOC) #UnitedBy campaign through a global activation developed to inspire future generations.

In what has progressed into an annual International Hockey Federation (FIH) campaign, National Associations and Continental Federations are being encouraged to undertake mass participation hockey activities which aim to raise awareness of the vital role sport and physical activity plays in society – especially as potential tools for development, youth engagement and empowerment. Hockey truly is a'Sport for All', played from junior to masters, by families, people with impairments and from all walks of life. It is also gender balanced across all levels of the sport.

More than 50 countries across all continents will be undertaking hockey activities this year. The National Association's who deliver the best two projects will be awarded a develop grant by the FIH Hockey Academy to help grow the sport further in those particular nations.

A small selection of activities from each continent are listed below:

Africa
Tanzania
With the support of their National Olympic Committee (NOC), the Tanzania Hockey Association will celebrate Olympic Day by engaging with over 1,500 people from all walks of life in a sports bonanza. Thousands of boys and girls from primary and secondary schools, adults and people with impairments from across three regions of the country will play in a mixed Hockey5s team competition. Each of the participants will also learn about Olympic history and its values and will be asked to translate their thoughts into artistic paintings which portray Olympism.

Uganda
The Uganda Hockey Association will be engaging children from primary schools by teaching them Olympic values through the sport of hockey. They will also be coaching a group of children with impairments and thereafter holding a Hockey5s competition involving both young and old players. The Under-18 national team will be on-site to provide inspiration to all the participants.

Nepal
As part of Olympic Day 2018, the Nepal Hockey Association have enlisted some of the country's leading male and female hockey players to showcase the sport in an exhibition tournament. During this event, the athletes will teach young students about hockey with a view to inspiring them to develop the sport in their own schools following this activity.

Pakistan
The Pakistan Hockey Federation are organising events across the country in celebration of Olympic Day. Interclub Championships at District level will culminate in the Final being held at the iconic National Hockey Stadium in their capital city, Lahore.

Europe
Estonia
Children across Estonia will be inspired to start playing hockey through a series of educational activities in schools run by the Estonian Hockey Association. An exhibition match featuring the country's top players will also be used to inspire the next generation of hockey stars in the Eastern European nation.

Lithuania
In Lithuania over 9,000 people will get the opportunity to try hockey thanks to the Lithuanian Hockey Federation's extensive Olympic Day activities. In addition to come and try sessions at multi-sport Olympic Day events, there is also a particular focus on children's hockey tournaments across the country in locations including Kaunas, Šiauliai and for the first time in Vilnius and Panevėžys. Their activities have been recognised by the Lithuanian Foundation for Physical Culture and Sports who have allocated funds for the purchase of hockey equipment.

Oceania
Samoa
The Samoa Hockey Federation has focused their Olympic Day activities around an awareness campaign designed to grow interest in the game of hockey, focusing on the health benefits and the inclusivity of the sport - with it being accessible to all ages and ability. Their activities were also used as an opportunity to inspire local athletes, showcasing hockey as an Olympic sport that they could participate in on the international stage.

Pan America
Cuba
A celebration of Olympic Day is being conducted across all 12 of Cuba's provinces, which include mini-hockey festivals for children, youths, adults and veterans. The national team played an important role in inspiring participants whilst exhibitions of hockey paintings and cultural events were also held to reflect Olympic values. It is expected that over 3,000 people will take part in these celebrations organised by the Federacion Cubana de Hockey.

Chile
The Federacion Chilena de Hockey has organised a project that aims to spread and expand hockey to all sectors of Chilean society. This includes sports workshops being held in 13 low-income schools in the city of Santiago. These workshops are aiming to increase the number of hockey players in the city by around 600 participants. A tournament involving the 13 vulnerable schools was organised, which included games, camps, and recreational activities, whilst the Chilean national team athletes also helped inspire the young competitors.

Olympians at both the Rabobank Hockey Champions Trophy Breda 2018 and across the planet will also be sharing their views on Olympism and the Olympic Games on social media over the weekend, with many of these posted on and shared via FIH Twitter and Facebook.

If you're involved, make sure you use the hashtag #OlympicDay and join the #UnitedBy hockey movement on 23 June.