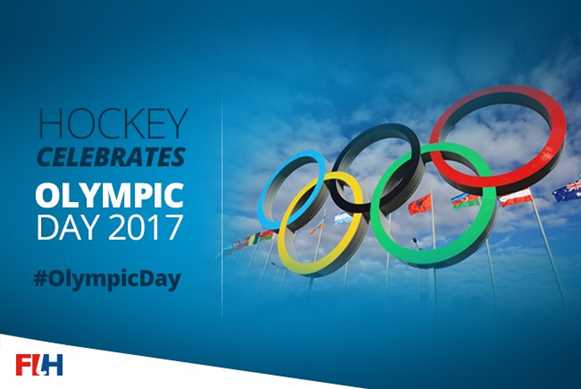 On 23 June the world celebrates Olympic Day - an annual occasion which is much more than just a sports event. It is a day for the world to get active, learn about Olympic values and discover new sports.

Earlier this year, the International Hockey Federation (FIH) reached out to National Associations and Continental Federations in a bid to coordinate joined up global activity to engage the world with the sport of hockey.

More than 50 countries will be undertaking hockey activity this year with some of their projects highlighted below.

In addition to this, athletes have been sharing their Olympic memories and highlights with FIH on our social channels over the last few weeks, which will be posted on FIH Twitter and Facebook throughout the day.

Swaziland Hockey Association ran a project which aimed to serve as a hockey outreach programme to the Swaziland population. It was an introduction for Swazis to the sport of hockey and every citizen was invited. The first event showcased hockey skills by seasoned hockey players in the capital city, Mbabane. The second was a Hockey5s event at Waterford College. There, team's of eight (five + three substitutes), mixed by gender, age and hockey experience participated in what was a hugely entertaining and exciting tournament. Some of the countries highest profile players also put on another coaching session, showcasing complex skills such as a tomahawk, drag-flicks and overhead passes, with a view to inspiring the next generation.

In Sierra Leone, a country where hockey faces many challenges, the National Association ran a series of activities to promote hockey not only as a means of employment but also to educate and instil a positive mindset for active and healthy lifestyles. As part of Sierra Leone's Olympic Festival other activities included a clubs mini tournament, clinics for coaches and umpires and a mini-competition involving six primary schools and six secondary schools.

In Iraq, their National Association's main aim was to inspire the stars of the future. They did this by getting youngsters active and engaging them in several education workshops, one of which aimed to raise awareness about Olympic heritage and Iraq's history at the Olympics. Their long-term ambition is to inspire such youths to become the first generation to represent Iraq at the Olympics as a hockey team. One of their first targets was to develop a programme aimed at qualification for the 2023 Youth Olympic Games. Hockey activities across the country included coaching sessions and Hockey5s tournaments.

Thailand will be taking hockey into impoverished communities as part of Olympic Day celebrations. Several locations under public highways are being used by slum communities as gathering spots where youths currently play futsal, volleyball and some other small sided games. With hockey part of the Southeast Asian Games, Asian Games, as well as the Olympic programmes, the Thai Hockey Association are using Olympic Day as an exciting opportunity to introduce hockey to these slum communities as a form of social development. In certain areas of the capital city, Bangkok, futsal courts will be used to host a number of Hockey5s tournaments involving youths and communities in these areas on 23 June.

EUROPE
Swiss Hockey will be running a tournament for all players not involved in the elite championship within the country. Mixed teams of boys and girls will play in events across the country, with mass participation the main aim of their efforts.

Netherlands celebrated Olympic Day in Amsterdam on 22 and 23 June, with the Amsterdam Olympic Days for school children. Amongst other sports the KNHB offered the Urban Hockey Experience. This was a combination of 3v3 and Hockey5s plus Urban Tricks and Challenges with some of their world class talent.

Hockey Australia's main activities were undertaken during 'National Hockey Week' held between 17-25 June 2017. This was conducted as part of their 'Destination Hockey' campaign, an initiative to help clubs promote hockey among the local community in order to recruit new participants to play, watch and support the sport. As part of Olympic Day celebrations, clubs and state associations were encouraged to conduct activations and mini-events like come-and-try days and family days to allow hockey and non-hockey members to celebrate our sport with the community. An online media toolkit. An online contest called #100yardchallenge in the lead-up to the event along with other social media initiatives were also undertaken.

In Samoa, the National Association has just introduced hockey to their second island - Savaii. For Olympic Day this year hockey's development continued in the form of an Inter-Island Championship. This gave the Association the opportunity to select up and coming talent for their national teams,  ensuring that their teams will in the future have a truly national influence, with athletes from both islands.

In the USA, their National Association are currently undertaking a nationwide campaign aimed at encouraging current club members to invite their friends and family members to enjoy a day of hockey celebration at their club. Through this programme, 7,500 members will be enlightened by the values of Olympism. Thousands more non-members will receive the same, but also get to pick up a hockey stick for the first time. In summary, every hockey club that is associated with USA Field Hockey (approximately 300 clubs) will hold coaching sessions, play days, education sessions, games and/or tournaments between 23-25 June. With more than 25,000 athletes and coaches that are engaged and interacting in the sport, it was estimated that 30% (7,500) of club members will participate in their Olympic Day celebration, with more than 2,000 guests joining them. Hockey5s is expected to be one of the more popular disciplines played but clubs have also been developing programming that fits all levels of athlete that are expected to attend. Along with the USOC, US Field Hockey have worked to connect an Olympic athlete to as many events as possible. The athletes will share how the Olympic Values have shaped their lives and how these young athletes can use them in their every day lives.

The Bolivian Federation connected with every city in their country. Their focus was to draw people's attention to our sport and increase participation in hockey. The Federation organised hockey matches in different formats and disciplines, including Hockey5s, for participants of all ages, gender and social class. During this week of Olympic Day, every city engaged with this activity which saw some of the country's hockey stars and coaches attend, including young athletes and seniors. All of these events were broadcast live through their official social networks as well as in national press and on television.