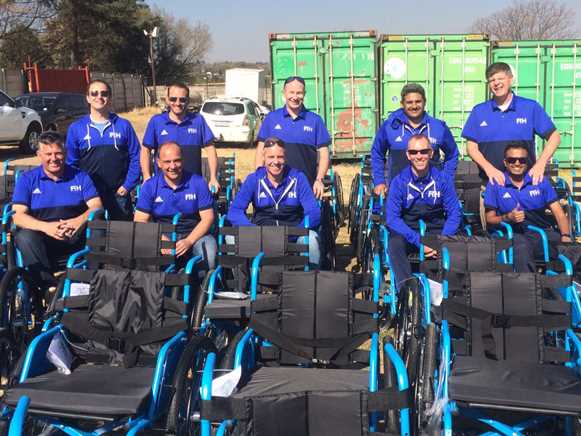 Every year on 18 July — the day Nelson Mandela was born — the United Nations (UN) asks individuals around the world to mark Nelson Mandela International Day by making a difference in their communities. Everyone has the ability and the responsibility to change the world for the better, and Mandela Day is an occasion for everyone to take action and inspire change, just as Madiba did every day.

This year, the hockey world is joining in worldwide celebrations which are coinciding with the Men’s and Women’s Hockey World League Semi-Finals 2017, currently being held in Johannesburg, South Africa.

Today, a number of competition officials gave up part of their rest day to make a contribution towards the cause. The hockey officials represented nations from all over the world, including the Netherlands, India, England, Belgium, USA and Pakistan.

A charity organisation called Network of Caring invited the people of Johannesburg to spend 67 minutes of their time assisting them with assembly of 150 wheelchairs for distribution in the Eastern Cape, Kwa-Zulu Natal and Namibia as part of the Free Wheelchair Mission. Network of Caring has delivered over 2,500 wheelchairs around the world to those in need. The figure of 67 minutes is a direct reference to the 67 years that Nelson Mandela campaigned for social justice.

It is no secret that Nelson Mandela was a huge sports fan. As a young man, he was a driven athlete, an amateur boxer who ran two hours every morning. It is written that he kept himself in excellent shape during his 27 years in prison.

After having won South Africa's first multiracial elections in 1994, he used sport as a tool to unite people and to redefine the country's international image. Nowhere was that more striking than during the Rugby World Cup held in South Africa in 1995.

Nelson Mandela once said: “Sport has the power to change the world. It has the power to inspire, it has the power to unite people in a way that little else does. It speaks to youth in a language they understand. Sport can create hope, where once there was only despair. It is more powerful than governments in breaking down racial barriers. It laughs in the face of all types of discrimination.”

The hockey world is committed to use our sport for positive change. Hockey is a truly inclusive sport, being played from juniors to masters, by families and people from all walks of life. It offers a para-version, small-sized formats and is proud to be completely gender balanced.

Speaking about hockey's links to such themes, Australia men's captain and Athens 2004 Olympic gold medallist Mark Knowles said: “I’ve been playing since I was four years old, my kids are now playing and my parents are still playing in their late 60s and early 70s. We play a beautiful game outdoors. We get to play all around the world and, no matter how fierce things get out on the field, the one thing that I love about hockey is that we can go back to the hotel and say g’day to all the other teams and players. We are a sport that mixes genders and pushes for equality.”

Germany captain Mats Grambusch also spoke positively of hockey's positive impact on the world. He said: “Hockey is a sport that makes the world a better place because we don’t have barriers like racism or sexism and anyone can play - from when you are very young until you are very old."

He continued: "It is really important for the world to have team sports like hockey because it brings people together. Team sports make you a better person because you learn how to interact with people. When we come here to play for the national squad, which is a huge honour for all of us, we get to experience other cultures which help us grow as people. It is inspiring to see the culture in places like South Africa and India, and interacting with those cultures makes you a better person.”

South African athlete Owen Mvimbi is proud to see hockey supporting this celebration. He said: "It is great to play matches home and away, meeting people in different countries and cultures. Sport brings people together in that way, and makes us realise how similar we all are because people from all over the world have had hard times and good times, and you can relate to that. Everyone on the field, whether winning or losing, we all feel the same. We know what it is like to win and what it is like to lose, which is why you often see the winning team trying to pick up the losing side at the end of a game because they know what it is like to lose. We all want the same thing but we know we cannot all have it at the same time. We all go through tough experiences, but we will all try our best to help each other get through it."

Speaking specifically about Nelson Mandela he said: "I’m just grateful - grateful for the sacrifice that he made for all of us to unite the country. If we could, we should have Mandela Day every day to try to help each other even in small ways. Mandela day is a big deal here, and a lot of people and companies dedicate the whole day in an effort to support each other. We love our country and want to make it a better place as much as possible."