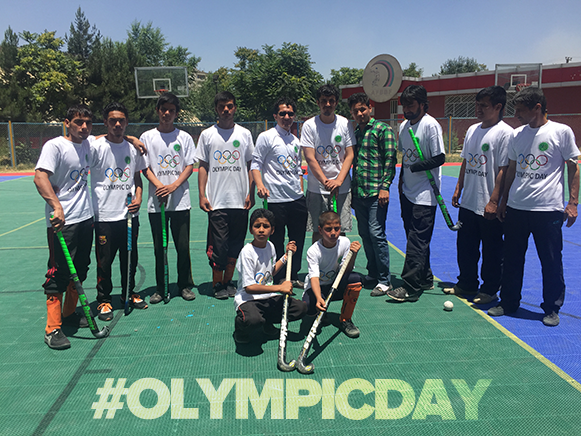 Hockey shines a light in Afghanistan

It was 73 years ago that Afghanistan was one of the top 10 hockey nations in the world. Since then, wars and civil unrest have meant that the sport has drifted out of public consciousness and the national men's team now sit at 91 in the FIH World Rankings, while the women have no world ranking at all.

The Afghanistan Hockey Association has ambitions to restore hockey's popularity in the country and is using Olympic Day as a vehicle to do this.

The International Olympic Committee's (IOC) Olympic Day is a world-wide initiative that aims to promote the values of the Olympic movement, as well as get people active and help them discover new sports. The day is underpinned by three pillars central to the Olympic ideals: to move, learn and discover. And, through the work of our continental federations and national associations, hockey is a sport that has embraced Olympic Day wholeheartedly.

In line with Olympic ideals, the Afghanistan Hockey Association is looking to use hockey as a tool for peace and a means of rebuilding society. With the Olympic movement promoting peace across the world, Olympic Day on 23 June is a way to celebrate the power of sport to bring people together.

This is a sentiment echoed by the Afghanistan Hockey Association: “We understand the main idea behind the Olympic movement and its values is to use sport for the benefit of humanity.

“Due to the civil war in the country, a gap between the society/culture and sports has been created but sport is a powerful tool for peace, unity and building a responsible society.”

The Afghanistan Hockey Association has created an innovative day of activities that seek to promote hockey and its many values to a wide-ranging and diverse population.

The idea is to provide coaching sessions, educational seminars and other events that promote hockey as a sport that is inclusive to all and mirrors the values of the Olympic movement. There will be hockey tournaments held in all provinces that currently have active hockey teams. This will include a tournament in the capital city Kabul and some events in children’s orphanages. Seminars will take place that explore issues around anti-doping and coaching in life skills as well as hockey. And there will be a number of forums that will bring people together to discuss the values of sport and how they relate to other areas of life. These forums will include the relationship between sport and art and sport and music; women and sport; and sport and disabilities.

There will also be fun sessions, particularly aimed at younger children, such as designing the five Olympic rings using colourful fruit and vegetables. And in a movement that really highlights how sport can be used as a powerful voice against feelings of fear and tension, an art project will encourage people to paint pictures depicting sport and peace, including the pictures of national hockey players, on the high, grey security walls that surround many government buildings in Kabul.

The Afghanistan Hockey Association says: “We would like to represent the true values of sport and the Olympic movement with our Olympic Day project. We want to say no to any discrimination; create opportunities for the participants to play hockey; to enjoy friendship; to respect each other beliefs and and experience the spirituality of sport.”