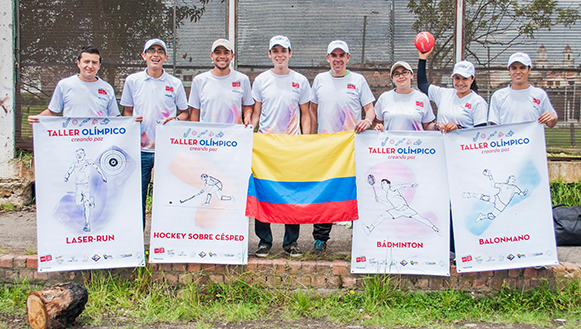 While the FIH Pro League continues to amaze and the FIH Series Finals is on the horizon offering an Olympic qualifying spot as the ultimate prize, it is also worth taking a moment to contemplate another, astonishing role that hockey can play.

Hockey as a catalyst for change is an aspect of our sport that is often under the spotlight but can be as impactful as a World Cup medal or an Olympic gold.

One such project is being run by social entrepreneur, Juan Sanchez, in the turbulent Central American state of Colombia.

Colombia has a violent recent history. More than 220,000 lives have been lost during an ongoing armed conflict between the Colombian government and the Revolutionary Armed Forces of Colombia (FARC). Recent attempts at brokering a truce between the two groups have led to a fragile peace.

It was against this backdrop of violence that Sanchez decided that hockey could play a role. His vision for a sustainable hockey project won the support of the International Olympic Committee (IOC) and is fast gaining traction in two Colombian cities – the capital Bogota and Itagui in Antioquia.

Sanchez now runs one of 42 community-based projects around the globe. His project – using hockey as an activity to promote change in challenging local communities – headlines as ‘Social Change Through Sport’.

In 2018, recognising the value of the project, the IOC made the 25-year-old a Young Change Maker, an initiative supported and funded by the International Olympic Committee (IOC).

“I had seen the power of sport in multiple scenarios [for example, in South Africa, rugby was used as a tool to end apartheid], and I felt something needed to be done. Here was an opportunity to use sport as a tool to achieve social cohesion in a country that after the peace process felt more divided than ever.”

The Young Change Maker programme provided Juan with a chance to put substance to his ideas. He contacted schools in marginalised areas and spoke to them about his plans. Soon he was matching hockey coaches to schools as the project rapidly transformed from plans to reality. 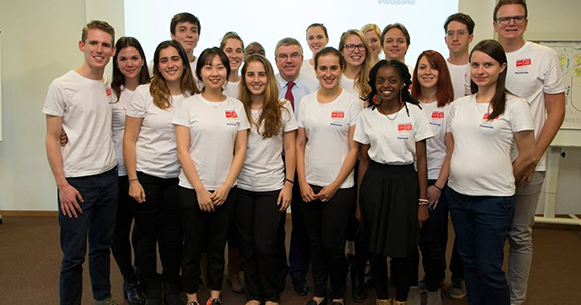 For the programme to work, Juan needed two factors to come together. He needed coaches to be on board and enthusiastic about delivering hockey in sometimes fractious areas; and he needed the schools to value the benefits that sport could bring.

Progress is understandably slow. One coach very much dedicated to hockey development is Cristina Llano, a physical education teacher from Argentina. She teaches hockey at the Colegio Gran Bretaña in Bogota, but is also involved in hockey from grass roots to elite level.

While Llano bemoans the lack of equipment, trained coaches and support at government level, she like Juan, is one of life’s ‘doing people’, so she had been waging a campaign, with hockey organisations at all levels, to get hockey into schools, colleges and a well-planned process in place to develop the national team over the next five years. The increase in tournaments, leagues and clubs in pockets across the country is testimony to her work.

A third player in this drive to promote hockey in Colombia is Armando Pinzon, a physical education teacher at the Colegio El Saltire I.E.D in Bogota. Much of Pinzon’s coaching knowledge was gained during a sabbatical in Germany when Armando was one of 12 coaches who traveled from Bogota to Cologne to work with top German hockey coach Rüdiger Hänel.

“My project started after I had the opportunity to travel to Germany to train in the foundations of hockey. When I returned, I started working with my students. I also brought back donated equipment from Germany.”

Armando then set about convincing his fellow sports staff of the value of coaching hockey. The result is eight trained hockey coaches and 2,500 children playing hockey as part of the physical education programme at the Colegio El Saltire.

One of the first challenges faced by Armando, aside from a lack of equipment, was to persuade the student cohort that there was a team sport besides football. He achieved this by ensuring that his coaching sessions were full of fun and interesting activities. Gradually, the students’ eyes were opened to the potential of this new, unfamiliar sport.

It has also helped, he says, to see more hockey on television and across social media. International coverage is helping the children understand and appreciate the game more.

Sanchez, Llana and Pinzon are just three of many dedicated coaches who are working on something less tangible than a gold medal but equally important – a viable, sustainable hockey programme that brings a love of the game but also acts as a catalyst for social change.

The work in Colombia is very much in line with the FIH Hockey4Life global programme. Under this initiative, projects follow three main themes: #Hockey Dreams, which promotes the sport to young people; #Equally Amazing, which focuses on equality and inclusion; and #BeyondHockey, the strand that extends to legacy and social impact.

The outcome of Hockey4Life? The programme aims to achieve: Higher rates of participation; better skills and more professional hockey programmes, more opportunities to play/coach and get involved and placing hockey as a key player within both the Olympic movement and the wider sporting landscape.