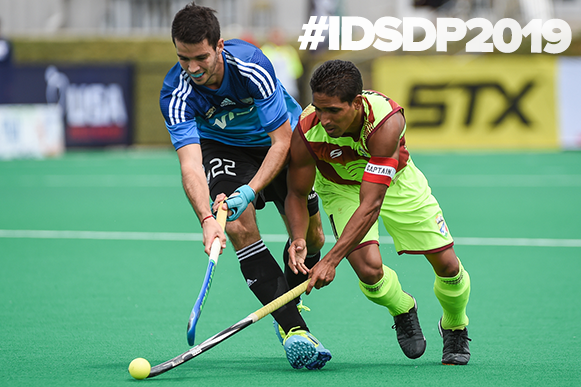 With 89 international caps to his name and a promising career in the Venezuelan provincial police force, Andy Adrians was enjoying life. But, as his country fell foul of political turmoil, the talented hockey player had to make one of the most difficult decisions of his life – to uproot and leave his country, friends and family behind, possibly for ever.

The South American country is currently being torn apart by politics. It regularly hits headlines across the world as troubles continues to escalate and a large number of people have died as a result of the violence. The economic situation is dire and, at present, there seems no end to the conflict.

When the political conflict began, Adrians had no intention of leaving his homeland. The warring between the two main political groups did persuade him to leave the police force and take up hockey coaching but, as he says: “At that point leaving my homeland was never an option, I couldn't picture myself leaving everything behind. Family and friends....” The 30-year-old’s voice tails off.

The decision to leave was “One of the hardest things I have done in my life” says Adrians. He left with just a suitcase and not knowing when he would see his family again.

“I had to hide the depth of my emotions from my mother-in-law. Saying good bye to the people that care about me was just so difficult.”

Andy embarked on the seven-day bus journey with another national team player, Liseida Sarmiento. The pair questioned their motives and considered turning back many times, but as Adrians says: “we kept each other going. It was easier to have someone to talk to and share feelings with. We did have moments when we argued bitterly but she will always be the person I shared this journey with.”

Adrians and Sarmiento were just two of 30 players from the men’s and women’s national teams who have fled Venezuela and are setting up new lives in Peru, Chile, USA , Argentina, Dominican Republic and Spain.

“My hope is never lost for the future. I hope that one day the situation changes in Venezuela and that we can all return to our homeland.”
- Andy Adrians

Lima, in Peru was Adrians’ destination. His passage had been paid by coach Carlos Morales who had come across the young player at international tournaments. It was a leap of faith by both men. Andy was putting his trust in a man he had met only a handful of times; Carlos was funding a player not knowing if he would even leave Venezuela.

But the trust paid off as Andy started playing hockey at Old Markham Hockey Club in Lima where Carlos was a player and club coach. He picked up work, helping with house maintenance and decoration and selling refreshments on the public transport system. This was followed by a job driving a delivery lorry, but he was soon looking for a new role as it was a working environment that saw a lot of mistreatment of the workers.

Eventually Andy found his way into hockey coaching and began to make better money. At this point his life began to look up and he was able to see a future for himself and his family.

“I received an offer from a Chilean hockey club, Sport Frances, to play for them and have more benefits. My experiences in Lima had been very tough for me, but I will remember it as a very important period of my life.”

Andy now sees himself as a citizen of the world. It is a situation, he says, that gives you a very different perspective on life. “My life has changed completely. I value everything around me. Being an immigrant has shown me all the really important things in life. I'm not the same person that left Venezuela, I now see myself as a son, brother, cousin, boyfriend and captain and so many other things.”

“I had to hide the depth of my emotions from my mother-in-law. Saying good bye to the people that care about me was just so difficult.”
- Andy Adrians

He now has regular employment as a hockey coach, has economic stability and is able to send money home to help the family members that remain in troubled Venezuela. He is a big part of the Sport Francés hockey club and has ambitions to lead the club to the national championships. He also would like the chance to play hockey in one of Europe’s big clubs. The sport, says Andy, has been his saviour through some really turbulent times.

Adrians has not turned his back on Venezuela. He hopes to return one day and even lead the national team into competition again. “Venezuela is a country with enormous potential in hockey,” he says. “The teams have achieved incredible victories with very little equipment. Training takes place on concrete or dust/earth pitches and yet the teams go out and compete on artificial turf in international competitions.

“The players are young guys that day in, day out, fight against a system that is looking to extinguish their hopes and dreams. With this sort of backdrop, the Venezuelan national team has managed to break into the top four nations in South America and into the top 10 in the Pan American Hockey Federation (Venezuela men finished fourth in the 2018 South American Championships and eighth in the 2017 Pan Am Cup). Think what the team could do under different circumstances, particularly if we can ever get an artificial pitch to play and train on.

“My hope is never lost for the future. I hope that one day the situation changes in Venezuela and that we can all return to our homeland.”

With thanks to Michael Gibney and Karen Moreno for the interview and translation.