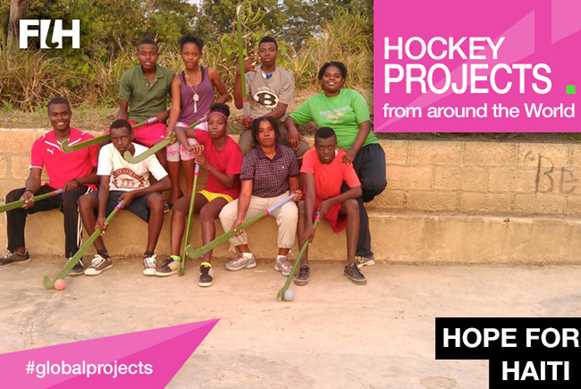 Hockey thrives in the most unexpected places. After an earthquake hit the Caribbean island of Haiti in 2010, the communities around the epicentre in Leogane – just 25 kilometres from the capital Port-au-Prince – were devastated. Apart from the dreadful loss of life, homes, schools and other buildings were destroyed in the catastrophic natural disaster.

So to learn that just three years later, the Haitian Hockey Federation was formed and six years on, more than 4,500 players regularly compete, well, that is a huge achievement by anyone’s standards. It is an even bigger achievement when you consider the island has no official hockey pitch.

“We strategically use basketball courts and the facilities used by other sports to train,” explains President of the Haitian Hockey Federation (HHF), Aubens Henker Fermine. “We consider this a great effort when you consider the lack of means the Federation has.”

For Fermine and his colleagues at the HFF, hockey has become much more than purely a sport to be played. “The people living here are in a bad situation. As a sports federation, it is not just the sport you are developing but you are dealing with all social and economic problems. Just three years after the earthquake, 1,200 children from shanty towns and slum areas were playing hockey. Right now these children have a stick in their hands rather than a gun. Through hockey we give them an alternative to alcohol, drugs and prostitution.”

In the early days of the hockey revolution in Haiti, the International Olympic Committee's (IOC) Sport for Hope Centre played a vital role in getting the HFF up and running.

Although the Centre has now turned its attentions to other needy groups, it’s help and support was crucial to the initial development of the sport. Fermine explains: “A clinic for coaches was held at the Centre in 2015 and 42 coaches from across the country received training. From there, the HFF began to devise and implement strategies and a philosophy for hockey."

One of the first things that Fermine and Secretary General of HHF Boby Johnny Baptiste did was contact other organisations to get some help and advice. ‘We realised we didn’t have enough resources, financial or equipment, so we knew we had to work with other countries and the Pan-American Hockey Federation (PAHF).”

While hockey is mostly played in the 12 clubs that have been set up in the past two years, it is also spreading into schools. Baptiste says that the HFF receives pleas for help in setting up hockey activities from schools “on a daily basis.” So far, the HFF has been able to help five schools implement a hockey programme.

“We also constantly receive demands from universities, clubs, orphanages or charitable foundations asking for coaches and facilities to introduce hockey in their area. It is a sport that attracts people; sometimes these are people who hadn’t heard of the sport until now, but hockey is helping communities to build good social relationships.”

For the future, the HFF vision is for hockey to continue to expand and grow across the entire island. The HFF’s ambitions are fully in line with the aims of the FIH Hockey Revolution - hockey is gaining a powerful image among the people of Haiti and the work of the HFF is spreading the game to many more people. However, as Fermine and Baptiste point out, to continue the great work of the past six years will take more than just their immense energy and belief, it will take a helping hand from the international hockey community.