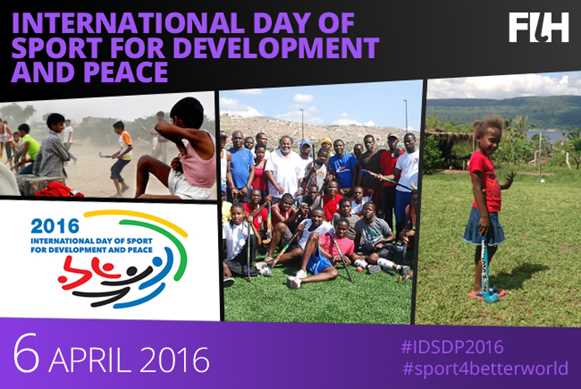 As the world celebrates International Day of Sport for Development and Peace on April 6, the International Hockey Federation (FIH) looks at how hockey is being used as a tool to promote peace and well-being within communities. The work going on around the international community is living proof that hockey can bring people together, overcome social problems and help educate people to live better, healthier lives.

Hockey is a sport that prides itself on transcending gender, age and, increasingly, social class. The numerous global projects that we highlight on the FIH website each week, demonstrate that hockey is a game that can be enjoyed anywhere - whether on a sandy, rubble-strewn pitch as much as it can on top class artificial turf. Let’s take a quick look at some of the good work being carried out by the hockey community across the continents:

Haiti was struck by a devastating earthquake six years ago, with 160,000 people losing their lives and a further 1.5 million people displaced. The Caribbean island has been rebuilding communities ever since. While repairing buildings, re-installing water supplies and getting the infrastructure of the country up and running again has been the main priority, the health and welfare of the population remains a concern to both the government and aid agencies. Providing sporting activities is one way that this rebuilding process helps to teach young people how to live a healthy and social lives, and it is why the hockey tournaments organised by the IOC's Sport for Hope Centre are playing such an important aspect of the country’s healing process. 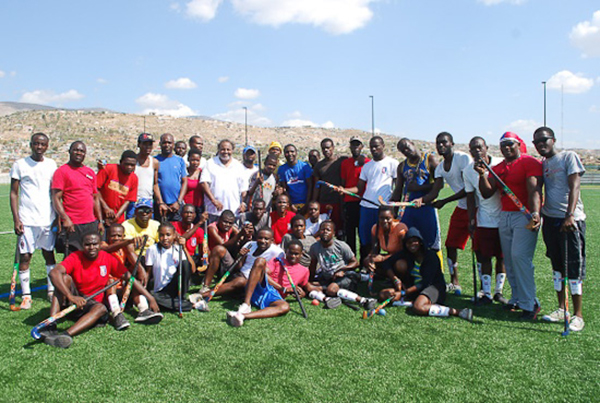 Participants of a recent hockey clinic at the Sport for Hope Centre in Haiti Photo: PAHF

When the Targeted Assisted Programme (TAP) was launched in West Africa in 2014, it had six targeted outcomes including: raising the standard of umpiring and coaching throughout Ghana and neighbouring countries; for the Ghana women’s national team to qualify for a world level event by 2022; and to deliver more equipment and resources to the West African region. The TAP project is part of FIH’s global initiative to drive forwards sustainable projects by working in partnership with continental and national associations. In the case of West Africa, this involved a joint venture between England Hockey, UK Sport, the African Hockey Federation and the Ghana Hockey Association By June 2015, 39 Level One and Level Two coaches from Ghana, Sierra Leone, Senegal, Togo, Cote D’Ivoire, Burkina Faso and Nigeria had all been accredited. In the same time scale, 21 umpires had also received their training. In addition, at the 2015 Unibet EuroHockey Championships in London, England, 1,200 sticks were collected and sent to the TAP organisers.
Ghana women will be competing in this year’s Hockey World League Round One and, if all plans come into place – will be hosting the event in September on a new artificial surface.

Over in Asia, 250 children are benefiting from the work of Andrea Thumshirn and her work with children in deprived, rural areas. Hockey Village India was founded by Andrea in 2010, with the first hockey village, Garh Himmat Singh, opening in Rajasthan. Since then, four more Hockey Villages have opened across India. Andrea, who was a German national junior player, outlines what life is like for the children in these areas. “Most of our kids are from poor farmer families. We provide them with everything from shoes, socks, shorts, shirts, sticks, shin pads, track suits. We provide transport, accommodation and food when we go out for matches and tournaments. We even bought three cows to provide milk so the little ones get some protein. These kids are smaller in size and more skinny than the same age group kids in the cities.” Through the Hockey Villages, the pupils are given a basic, modern education, including English, mathematics and computing as well as drawing and arts. Then the pupils get sport – hockey - every day. Andrea explains: “Besides education, we believe in sports, as sports is important for a healthy body, for so many important skills in life like team spirit, motivation, going to our limits and achieving something.” 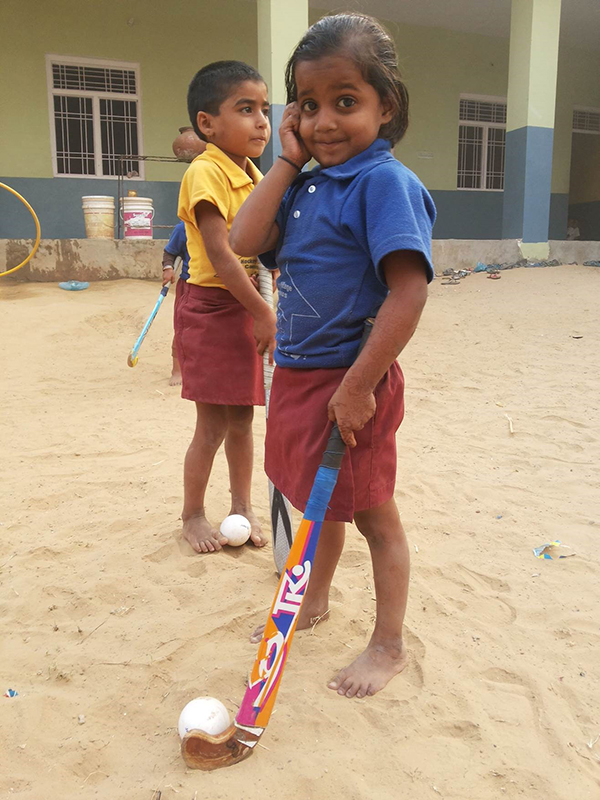 Providing sporting opportunities is vital for the health and social well-being of a nation, and no-where has an opportunity been seized more eagerly than in the Oceania region, where both the Solomon Islands and Vanuatu have used hockey to great effect in the process of building communities.

Vanuatu suffered devastating damage after cyclone Pam wreaked havoc on the Oceania island in March 2015. With 16 people losing their lives and many thousands affected by one of the worse storms to hit the area this century, the people of Vanuatu have been rebuilding their lives in the months since the cyclone struck. Following the disaster, the hockey family pulled together to support the small Pacific island which is home to just over 260,000 people. The IOC provided vital emergency funding to help the country rebuild their sports services , including the hockey facilities. The Vanuatu Hockey Federation also received assistance from the Oceania Hockey Federation and the Vanuatu National Olympic Committee which enabled them to send their teams to the Pacific Games in Papua New Guinea later last year, while from further afield, the European Hockey Federation provided funding to source a team coach. The support paid off as the Vanuatu hockey teams picked up a silver medal in the men’s event, losing to Fiji in the final; while the women won bronze after they defeated Tonga.

Over in the Solomon Islands, just 14 months ago, they had no hockey structure to speak off. But in just a few short months, there has been a complete turn around and, in 2015, the Solomon Islands were crowned the Oceania TAP Star after they embraced the ideals and aims of the FIH and Oceania Hockey Federation TAP project. Solomon Islands has a history of hockey but in recent years, a lack of leadership, government instability and natural disasters meant hockey had disappeared. To reintroduce the sport, Oceania Hockey Federation and the newly formed Solomon Island Hockey Federation (SIHF) got together to promote and the idea of a smaller game – Hockey5s. This was the catalyst needed to kickstart hockey in the region, and by the time the 2015 Pacific Games was held in July in Papua New Guinea, the had a men’s team that was not only ready for entry, but returned with a bronze medal. In addition, SIHF recently held its first Secondary Schools Championships with six boys and six girls teams competing and four clubs have started up. In a country where sporting opportunities, particularly for girls and women, are sparse, this has really addressed a serious need. 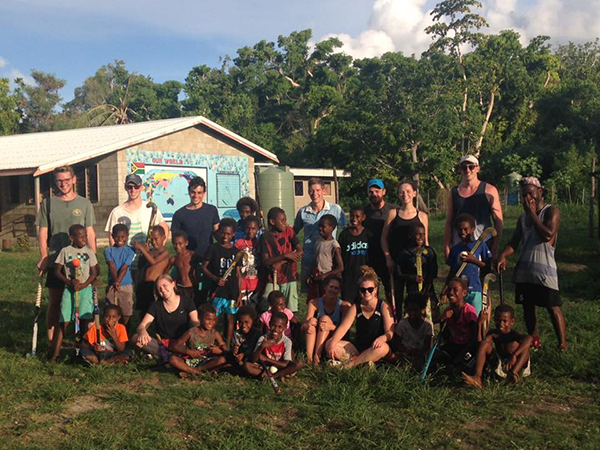 In Europe, Portugal are currently developing a scientific study among some university professors’ from Portugal and Canada. Since beginning of 2015 the Portuguese Hockey Federation created a project called Positive Youth Development within Coach Education for Youth Coaches which aims to understand the impact of coach education on coaches’ ability to teach life skills and foster a positive youth development climate. In this sense, the objective was to make scientifically based decisions about coach education curriculum so youth coaches could fulfil this very important role. Positive youth development, can be defined as a framework that includes intervention programmes and/or teaching models that enable a successful transition to adult life by creating sufficient environmental conditions, so young people can strive and flourish. Generally speaking, positive youth development promotes life skills so that children (young athletes) can be able to lead, be responsible, decide better, respect others and be autonomous, promoting a successful transition to adult life. On International Day of Sport for Development and Peace the Portugese Hockey Federation have planned a training session in a Porto school for a class containing deaf children and another class that has young people identified as at possible risk of social exclusion - children that come from identified risk environments. In those training sessions they will be applying this model, applying positive youth development through hockey.

Meanwhile, in Turkey, a country with more than its fair share of issues, the sphere of hockey it is making great progress. A seminar on indoor hockey was held last year and was attended by more than 250 coaches, umpires, club managers and players. a similar seminar is planned for the outdoor game in the coming months. The indoor hockey seminar received Olympic Solidarity funding and was organised and run by the Turkish Hockey Federation. As in West Africa and Oceania, this development work in Turkey is part of the FIH Targeted Assistance Programme (TAP). FIH is working with the Turkish Hockey Federation, the European Hockey Federation (EHF) and Netherlands National Association - KNHB – on developing a long-term strategy to build a good participation base for hockey across all levels and age groups, both indoors and outdoors in the southern European country. 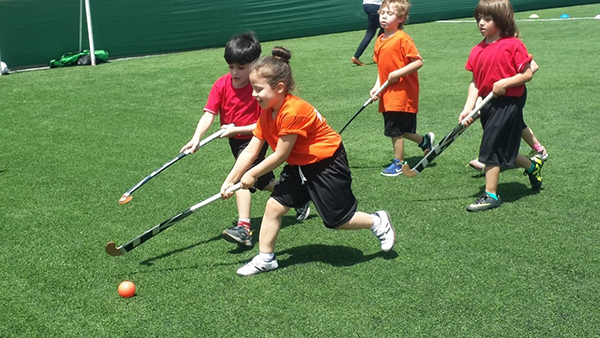 These examples from around the world demonstrate just how powerful sport can be in bringing communities together, despite the difficulties faced in every day life. The sport of hockey helps promote peace and equality whilst also helping communities improve their health and well-being. Although there are many examples of such development, FIH is committed to do more by helping the sport grow across the world.