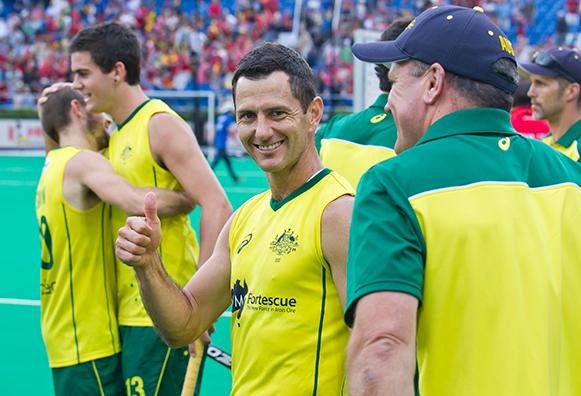 As we continue our series of feature stories marking the original event dates of Tokyo 2020, we hear from a true Australia hockey legend, the four-time Olympian Jamie Dwyer.

With an international career that spanned 15 years, 365 matches and resulted in 215 goals, Dwyer couldn’t have started his Olympic odyssey in better style. At Athens in 2004, Dwyer scored a hat trick in his first game (against New Zealand), two more in his second (versus Argentina) and then scored the goal that gave Australia the gold medal in the final against the reigning Olympic champions, the Netherlands. In this interview Dwyer looks back at those magical moments and offers some golden words of advice to athletes heading to Tokyo.

Do you remember the feeling that you got as an athlete standing on the pitch as the national anthem played ahead of your first game at the Athens Olympics?
Jamie Dwyer: “I remember standing with my teammates listening to the national anthem. I was very proud to be there and I was super excited to get the game underway and I just couldn’t wait for the anthem to finish and the whistle to go so I was officially an Olympian.”

Can you talk us through the moment you scored the winning goal in Athens?
Jamie Dwyer: “In 2004 the Olympic final [in Athens] was against Holland and they had won the two Olympics before that. It was nine o’clock at night and a packed crowd. It went to extra time and we got a corner just at the end of the first period of extra time. I was lucky as the ball came over to me and I decided to hit it. It missed the runner’s foot, hit the ‘keeper’s pads and went into the goal. It was a dream come true. Everything I had wanted as a young kid was to go to the Olympics so to do that and win a gold medal was unbelievable. I still pinch myself to this day.”

Do you have a standout Olympic moment (apart from scoring that goal in the 2004 final)?
Jamie Dwyer: “I guess my standout in the Olympics, apart from winning the gold medal and that game, was probably my first game. It is something that has just stuck in my mind so clearly. It was over 16 years ago now. It was against New Zealand and a very hot day. I scored a hat trick, so I was very happy in that game and it meant we got off to a good start and that was when I realised I was an Olympic athlete.”

What has been the best piece of advice you ever received as a player? And what would you say to a young player going into his or her first Olympics?
Jamie Dwyer: “The best piece of advice I ever got was just to enjoy the game and try to reach your potential. So that was the attitude I had throughout my whole career. Going into an Olympics, my whole attitude was enjoy the experience and enjoy the moment but also get the most out of what you’ve got. The sky’s the limit so just grind away and chip away to be the best you can possibly be. If I was going to give any advice to athletes going into their first experience, I would say: ‘It is a unique experience, going to the Olympics, but just remember what you are there for and that is to compete and be your best.”

What do you hope for during the hockey competitions at next year's Tokyo Olympics?
Jamie Dwyer: “What I would like to see at the Tokyo Olympics is some really awesome hockey. Hockey is continually improving, athletes are getting better, the skills are getting better and I want to see unbelievable games. I want to see really competitive matches between all 12 mens’s and women’s teams and show some awesome hockey skills to the world.”