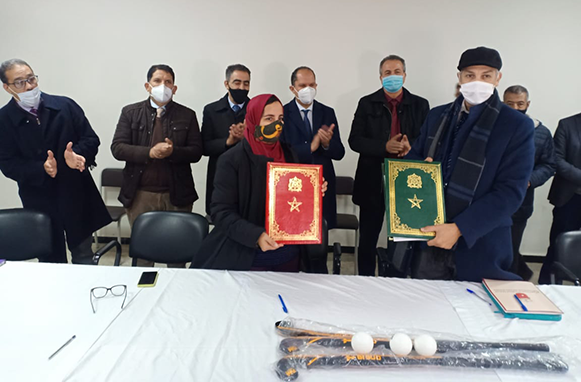 Hockey in Morocco marches on

It is now seven years since the Moroccan Hockey Federation threw itself wholeheartedly into developing hockey across the nation in line with the ambitions outlined by the FIH at its 2014 Congress.

The Hockey Revolution was launched in 2014 in the city of Marrakesh and since then, the Royal Moroccan Hockey Federation has continued to drive the sport forwards and raise its profile in schools across the North African country.

Kamal Ghallali is President of the Royal Moroccan Hockey Federation and, with a team of committed hockey enthusiasts, he has been working tirelessly to find opportunities to get more people playing hockey from across all regions of Morocco.

So, it is with great delight that Ghallali has been able to report on a huge step forward for the sport.

“We have signed an agreement with the Royal Moroccan Federation of School Sport which gives us access to all schools in the country.

“We were convinced that sport cannot develop without going through the school system, and we have already targeted four regions, which has resulted in dozens of schools in a number of cities, introducing hockey onto the curriculum.

“Our strategy, first and foremost, was to make hockey popular in these schools within the first two years of the launch in the hope of making it a national school sport according to the strategy agreed with the School Sport Federation.”

That ambition was realised just a few days ago as the Hockey Federation signed an agreement for hockey to become a major sport in all schools in the region of Casablanca- Settat. With the agreement, hockey will become an integral part of the school sport curriculum. The agreement was signed by the Director of the National Sport School promotion and directors of many of the schools involved.

This is a step towards national recognition and the target is an ambitious one: Morocco has more than 10,822 schools, including 7,785 primary schools, 1,968 middle schools and 1,180 high schools, providing for eight million students. Ghallali  will call it a total success when agreements have been signed in all regions.

In addition to the schools agreement, the Federation is also involved in a new project called Study and Sport. Ghallali explains more: “We have a project programme called Study and Sport, which gathers many athletes from different sports into one of eight central venues. Here the students are provided with accommodation, food, study and sport facilities – indoor facilites, artificial pitches, swimming pools and gym facilities. Up to 30 hockey students will attend each of eight centres, receiving a great foundation in both sport and education."

The President and his team have been assiduously pursuing the ambition that first flared in 2014. They are now seeing the results of their determination as more and more children pick up hockey sticks and learn to love the game.