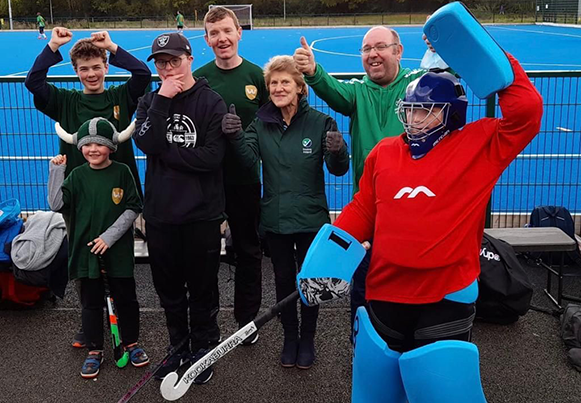 Hockey ID: Where everyone's a superstar

‘The event was so affirming and inspiring and shows what sport is truly about. It’s when your child walks off a pitch declaring himself to be a “superstar” you know it’s been a massive success.’

It was a blustery day in Blanchardstown at the home of Hockey Ireland but that didn’t dampen the spirits of the players, parents, volunteers, coaches and FIH Academy Coach Educators gathered for the inaugural WISE Hockey ID Fest. The quote above was from the parent of a youngster playing for the Botanic Blitzers, one of more than 50 young players with intellectual disabilities who were all enjoying some international hockey competition.

The weekend highlights included Zumba warm-ups; an inclusive atmosphere that was enjoyed by participants; their parents and the coaching staff and umpires; and a taste of competitive hockey action with teams and staff that came from both Ireland and further afield.

For two days over the weekend, seven teams, 18 coaching delegates and a team of FIH Academy Coach Educators worked together to put on a splendid show of inclusive hockey, while also providing some great learning and training opportunities for the coaching delegates. So impressive was the ambition of this inaugural project that it attracted government interest and the Irish Minister for Sport Jack Chambers was on hand to lend his support.

‘[It was] Brilliant to see Irish Hockey organise an inclusive #hockey4all international tournament for teams across the UK in the Sport Campus in Blanchardstown today. Great to meet the teams, families and volunteers,’ he tweeted.

Five of the teams came from clubs in Ireland, with a further two joining the action from England. The delegates on the FIH Academy Coach Education course were from Ireland, England and the Netherlands. The Coach Educators were Hugo Santos of Portugal, Hans Pieter van Beek of the Netherlands, goalkeeping specialist Grahame Mansell-Grace and FIH Hockey ID Project lead and former GB international Norman Hughes.

The participating teams were: Wakefield, Railway, Monkstown, Botanic, Wicklow, Harbourne and Three Rock Rovers, with every team playing each other over the course of the competition. 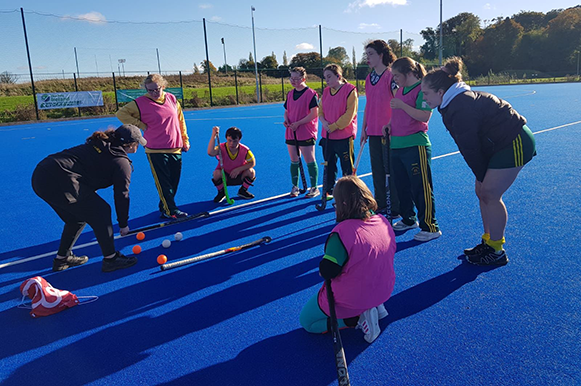 At the close of the inaugural HockeyID Festival, the feedback was hugely positive.

Elina Doyle, a member of the Three Rock Rovers Rocket squad, said: ‘I really enjoyed the tournament. I had so much fun with meeting up with everyone and spending time together with different clubs. I really loved it a lot.’

And Ann Murray, who was manager of the Botanic Blitzers gave this feedback, gathered from the team’s parents and players:

‘The tournament this weekend has further consolidated the Botanic HC commitment of an inclusive way forward for the club and the Blitzers team. This is a win win for players and club members and represents a remarkable partnership with the local community.

‘The enthusiasm of the coaches, players and supporters was simply infectious. This is an event we will all remember as a very significant moment for all of us. Long may it be repeated. The smiles on the players faces and their sense of achievement can’t be measured. Thank you to everyone involved and well done.’

Daniel Monahan, who represented Wicklow Vikings, said: 'I had great fun at the two days of the festival. It was great to meet other teams from Ireland and the UK. Our team Wicklow Vikings are quite new and it was our first time at a festival. It was my first time playing in a match and I got to play in six over the weekend and I scored in every match. I enjoyed our training session learning about block tackles.'

Matthew from the Three Rock Rovers Rocket squad gave a big thumbs up to the music that played out over the loud speakers, adding to the festival atmosphere and added that he had enjoyed making friends from different clubs.

The music and Zumba was also popular with the parents gathered on the sideline. One mother, Adele Meenan, said: 'It was great to be back at a sporting event. The atmosphere was great between all the teams from Ireland and the UK. The extra events like the Zumba dancing and hockey training sessions were lots of fun.'

Another parents added: ‘What a happy, happy day. Thank you all, its definitely one for the memory book. Thank you to all the coaches and volunteers who give up their  time to coach all our special ones, this was a brilliant day today.’

Norman Hughes praised the hard work of Hockey Ireland development officer Dwyne Hill, and added: ‘We have got to thank Hockey Ireland for their generosity and enthusiasm to host this event. It is part of their inclusion programme and I think, looking at the outcome of this event, they are to be congratulated on the way they are promoting and enabling inclusivity in our sport.’