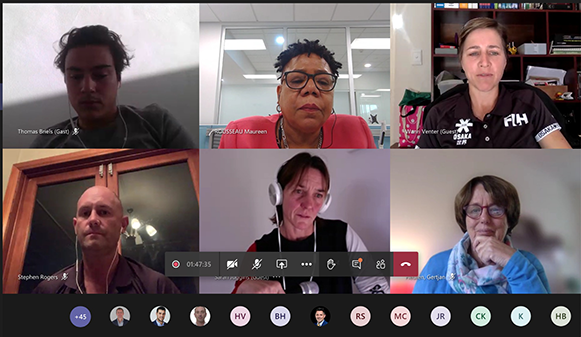 More than 70 participants joined a panel of guests on a FIH NA Development Series webinar that is the forerunner to a series of online events exploring gender equality.

Led by Marijke Fleuren, President of the European Hockey Federation, organised by the FIH Academy team and hosted by FIH writer Sarah Juggins, the webinar sought to raise awareness of gender equality issues from across the world.

The panelists were drawn from umpiring, competing and administration. Umpires Wanri Venter and Stephen Rogers spoke about their experiences as two of the first people to umpire as part of a mixed gender team. Maureen Craig-Rosseau called on her experiences as both a match official and as a Board member of both FIH and the Pan American Hockey Federation; and Thomas Briels represented the athlete community. The Belgium captain spoke about the fact that his level of awareness around equality issues had risen in recent years.

The absorbing conversation was listened to by an audience that came from across the globe and the entire webinar will be available as a recording for anyone who missed it, due to time differences.

Following the discussions, FIH has asked that any follow-up questions are directed to Valérie Horyna at the FIH –valerie.horyna@fih.ch – who will be compiling a list of topics that continental federations may choose to take into the follow-up webinar events.

Marijke Fleuren, who is also on the IOC Women’s Commission and chair of the FIH Women in Sport Committee opened the webinar by outlining work that has been going on at FIH Board level to promote gender equality. She pointed out however, that there is still much to be done and, in different parts of the world, women and girls were facing very different issues and challenges.

While all four panelists were able to provide numerous examples of good practice when it comes to gender equality, there were also several points raised that will resonate with the global audience. Rousseau spoke of the fact that women often have to work harder to get the same approbation as their male counterparts – a point that Venter agreed on.

South African Venter, also spoke of the domestic demands on women’s time that often means they can’t attend coaching sessions or training courses and this can create a barrier to them reaching the top levels of the sport.

In Australia, Rogers said there was a very positive approach to female umpires and coaches, and Briels went a step further by saying that he now didn’t notice whether an umpire was male or female; it was purely about the level of competence.

The group spoke about positive discrimination but the general consensus was that any promotion or leadership role must be learnt by right and competence, not due to gender. Rousseau raised a point about the importance of succession planning and explained how a good strategy for succession planning could lead to an equitable board, with the most competent people appointed.

A comment from one member of the audience spoke about the ultimate goal being a time and place when gender no longer needed to be something to comment on, because everyone was treated equally.

In a world where many variables – culture, politics, religion to name a few – create a range of vastly different situations, Venter’s advice to “rock the boat, but rock it gently”  seems prescient.

The next step is for each continent to decide on their own strategy for moving their own gender equality policy forwards. Representatives from each continental federation are invited to contact Valérie Hornya, who is Secretary of the FIH Women in Sport Committee, to discuss their strategy. As Fleuren pointed out in her opening comments: for some continental and national associations, this could mean bold solutions, for others it will be tiny steps – albeit all moving along the same pathway.