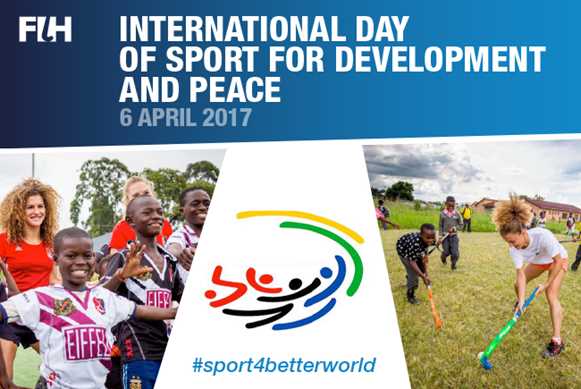 Hockey celebrates International Day of Sport for Development and Peace

As part of International Day of Sport for Development and Peace, the International Hockey Federation (FIH) takes a look at some of the projects around the world that are bringing together communities through the power of sport.

The relationship between sport and peace was first identified in Ancient Greece when warring nation states would lay down their arms to take part in a sporting contest. Quite often the honour of a nation was earned by victory on the sports field rather than the battle field.

It is all more complex these days – unsettled societies face challenges posed by war, famine, disease, poverty, natural disaster and many other issues. Sport does however remain a powerful tool for good. Whether it is the feel-good factor provided by a competition; the life skills learnt from being part of a team; the health benefits of an active life; or the social element of running around with mates.

Sport's part in promoting peace is not just about abandoning guns for hockey sticks – although that is the driver behind a hockey project in Haiti – it is about using hockey as a tool to improve the lives and life chances of those living within a community.

Zambia
The Hockey Dreams Foundation is working on the hockey pitch as well as in the compounds of West Africa. In the poor neighbourhoods of Lusaka, Zambia, there is high unemployment, in addition to the problems with alcohol and drugs.

Behind the ethos of the Hockey Dreams Foundation is the belief that by taking the youngsters to the sports field, by sending them to school and training them as a hockey coaches, they learn new skills, develop greater self-worth and turn into role models for others.

Consequently the children are more likely to stay away from a life of crime or drugs and will have the skills to work towards a better future. As a result, they are able to contribute to their family’s household costs and so hundreds families get a little faith in a better life. In addition, this is tapping into the huge pool of hockey talent that is currently under-developed in Africa.

Australia
For the girls and young women living in indigenous communities in the northern outreaches of Australia, sport – mainly football – was something that boys did. The female half of the remote community were not learning the valuable life lessons that sport can provide – team-work, problem-solving, winning, losing, competing and making life-long friends.

But, a programme run by Cairns Hockey is changing that. Aspire to be Deadly is a project run by the hockey association that offers mentoring and opportunities to indigenous communities in places such as Torres Strait Island, Cairns and Cape York.

Aside from mentoring coaches and running hockey programmes, there is also an annual Migi Kokan Hockey Carnival, where the entry requirements are that students have met or exceeded school attendance and behaviour standards.

The programme combines the values of sport with respect for cultural traditions. A spokesperson for Cairns hockey said: ‘Indigenous culture is strong and the respect and recognition shown through culture and traditions reinforce the importance of balance in all aspects of life in the region. The development of hockey as a community support programme recognised and understood the importance of this balance.”

Haiti
The country was struck by a devastating earthquake seven years ago, with 160,000 people losing their lives and a further 1.5 million people displaced. The Caribbean island has been rebuilding communities ever since.

While repairing buildings, re-installing water supplies and getting the infrastructure of the country up and running again has been the main priority, the health and welfare of the population remains a concern to both the government and aid agencies.

Providing sporting activities is one way that this rebuilding process helps to teach young people how to live a healthy and social lives, and it is why the hockey tournaments organised by the Sport For Hope Centre are playing such an important aspect of the country’s healing process.

Boney Georges, Programme Planning Officer at the Centre in Haiti explained that physical education does not appear on the curriculum of most schools on the island, only pupils at the very largest schools have access to sporting facilities and opportunities. The Sport For Hope Centre helps communities regain some control over their lives as well as showing them how to live a healthy lifestyle through sport.

India
One Thousand Hockey Legs is a project based in India that introduces hockey to school kids. It's a programme that was started by the K Arumugam, the founder of the non-governmental organisation Hockey Citizen Group, with the aim of providing children with an opportunity to understand, play and enjoy hockey.

The programme structure includes forming one or two teams per school, conducting friendly matches between schools, forming a team in each city, participating in state and national level competitions, holding exhibition matches, organising an annual hockey run and mentoring talent for the national team

The sub-plot of One Thousand Hockey Legs is to help lift disadvantaged children out of poverty and give them an opportunity for a better life. It’s mission statement says “Our vision is to provide a career for underprivileged kids (11-15), an opportunity to play sport in their school thereby ensuring they attend school regularly and take an interest in sport and academics.”

Turkey
Turkey is a country that has, in recent times, experienced troubles, but in the sphere of hockey it is making great progress.

Olympic Solidarity funding helped the Turkish Hockey Federation with the costs of running a seminar on indoor hockey, which more than 250 coaches, umpires, club managers and players attended.

Turkey is also getting support from the FIH Targeted Assistance Programme (TAP) to develop a long-term strategy for hockey. The project involves collaboration between FIH, the Turkish Hockey Federation, the European Hockey Federation (EHF) and Netherlands National Association - KNHB.

The results are already beginning to pay off – in 2016 Turkey hosted an FIH men’s Hockey World League Round 1 event, where the team finished a credible third, which moved them up the FIH Hero World Rankings from 51st to 47th. The women also entered Round 1, finishing fifth.

These are just a few of the incredible projects that are taking place around the globe, as people from the hockey family show that sport can be a powerful tool for peace in communities across the world.