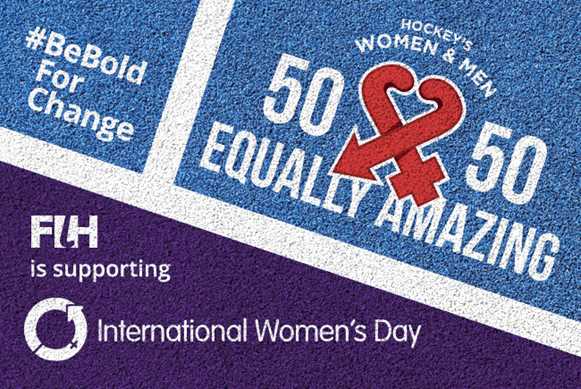 Hockey is today celebrating its bold claim that the sport is ‘Equally Amazing’ as part of International Women’s Day.

With sport part of a global agenda, FIH is passionate that hockey can contribute to advance gender equality on and off the field and has been making strides in this area for many years.

Hockey has a good story to tell. Looking at the pure participation numbers, the sport is played by as many girls and women as by boys and men – be it at last year’s Olympic Games in Rio, at regional, national or local levels. Likewise, hockey fans on social media are 50% female and 50% male.

Women’s events are also given just as much profile, if not more than men’s competitions. For example, when the Netherlands played Great Britain in the women’s Rio 2016 Olympic final, the engagement across the world was astonishing. Great Britain goalkeeper, Maddie Hinch, who recently won the 2016 FIH Hockey Stars Goalkeeper of the Year award, said: “I think if we had known at the time that the BBC was moving the national 10 o’clock news for our match and that nine million people were tuning in, then we would have been a lot more nervous!”

Since the 19th century, women’s hockey has been the major team sport available to females across the world. In international competition, unlike many sports where it was men only for many years, hockey has been relatively quick to offer men’s and women’s events. The first men’s Hockey World Cup was held in 1971, the women’s first World Cup took place in 1974.

Taking the example of top level sports coaching roles, women are generally still in a minority, but FIH is working hard to redress the balance. For instance, the FIH Hockey Academy’s Women in Elite Coaching Initiative aims to raise the number of female coaches at elite level, especially within the top 12 ranked nations.

It is something FIH Coach of the Year Karen Brown applauds, although she cautions: “People must realise that the top women coaches are in the position because they are talented and hard-working sports coaches; it should never be a perception that women are promoted just to balance the genders.”

At FIH, gender equality is regarded as an important part of good governance. For instance, FIH’s 16 person Executive Board now features seven women and nine men.

At the last FIH Congress in November, member National Associations’ agreed to change the gender structure of the Board, which sees four men and four women now represented as Ordinary Board Members (the other members are the elected President, elected representatives of Continental Federations and of the Athletes’ Committee and the CEO).

It is a matter that goes far beyond quotas. FIH wants to increase the degree of professionalism throughout all areas of hockey, a key component of the organisation’s 10-year Hockey Revolution strategy which aims to make the sport a global game that inspires the next generation. This also implies to increase the number of female professionals and volunteers working in hockey, be it on the field or in governance structures.

In relation to International Women’s Day, the United Nation’s Sustainable Development Goal 5 strives to achieve gender equality and empower all women and girls. Hockey is committed to play its part, to keep advancing gender equality throughout the sport and its structures. Hockey is therefore looking forward to join the group of United Nations International Gender Champions over the coming months.