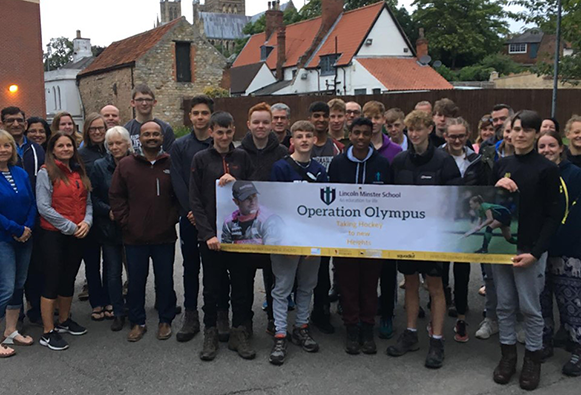 A new world record for a hockey match played at the highest altitude ever is due to be set anytime in the next few days.

As part of Operation Olympus, a group of students from Lincoln Minster School in Loncolnshire, England, will be joined by Great Britain and England men’s manager Andy Halliday, plus members of Hockey for Heroes, the charity that raises funds and provides support for injured servicemen and women.

The group, which comprises 20 students aged 15-18, will trek approximately 5,200 metres up the Annapurna Mountain Range in the Himalayas in north-central Nepal. They will then play a 40 minute hockey match – at the highest altitude this has ever happened.

Over the past few months, Gary Johnson, CEO of Hurricane Sports Foundation and a founding member of Hockey for Heroes, has spent time working with the students, developing their hockey technique and leadership skills in readiness for the challenge.

As they make their way across the mountain range, the group will be delivering hockey coaching sessions to communities along the route. The Lincoln Minster students have all been taught to coach hockey skills and small-sided games and will be putting these skills to the test, under the guidance of PE teacher Tom Eves, Johnson, Halliday and Joel Forrester, the managing director of Hockey for Heroes. The group will also distribute hockey equipment, sticks, balls and specialist goalkeeper clothing, to the communities with the wider aim of leaving a legacy of hockey in Nepal. – a country where hockey is currently not well known.

Just to add one more challenge into the mix, Halliday will be dribbling a hockey ball for the duration of the trek. Extreme dribbling is not a new thing for the GB manager – he has already dribbled a hockey ball up the three largest peaks in the UK – Snowdon, Scafell Pike and Ben Nevis – as part of a charity fundraiser.

Great Britain and England Head Coach Danny Kerry took to Twitter to offer his support to the group, adding: “A massive shout-out to the group as they dribble hockey balls up the foothills of the Himalayas. They will be introducing hockey to communities along the way. It is the most ridiculous idea ever; yeah it’s mad!”

And Olympic gold medalist Kate Richardson-Walsh said: “It’s unbelievable, trekking 18,000 feet to play a hockey match and leave a legacy. You will also be creating a new world record, the hockey family are all behind you and supporting you. Stay safe and have fun.”

Joel Forrester said: “On this expedition to Nepal, it is our aim to teach and inspire the future players of our sport. We also hope they learn key life principles in taking life on and being brave from their Hockey for Heroes mentors.”

He added: “The humanitarian aspect to this trip is also something we are really looking forward to. Delivering equipment and hockey coaching sessions to people in the most remote part of the world is something that we are passionate about. We want to have a positive impact upon people’s lives.”

And Mike Joyce, Executive Director of The Hockey Foundation, said: "Good luck with your incredible adventure and, of course, for your world record attempt to play hockey at 5,300 metres."