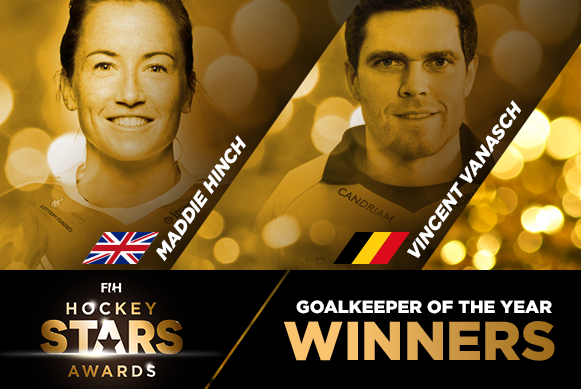 Goalkeepers of the Year 2018: Maddie Hinch and Vincent Vanasch

Maddie Hinch and Vincent Vanasch are both serial winners of the Best Goalkeeper awards. While the Belgium ‘keeper seems to be on an ever-rising trajectory of success, for Maddie Hinch, the year has been one of reflection and a gradual stepping away from the international game that has given her so much success. But both ‘keepers have given their position a new level of respect as they have been true purveyors of the art of goalkeeping throughout their careers.

Olympic gold in 2016 earned Maddie Hinch the Hockey Stars Best Female Goalkeeper award in 2016 and a phenomenal year in 2017 saw her repeat the feat. This year, Hinch was again at her best as she took to the field for England in the Vitality Hockey Women’s World Cup in London, and her remarkable consistency as England and Great Britain’s best goalkeeper sees her pick up her third consecutive FIH Best Female Goalkeeper Award.

"I’m struggling to express how I feel about being awarded this again for the third consecutive year. I have very mixed feelings. I’m grateful for every single vote. That means the world to me."
- Maddie Hinch

Hinch is now taking a break from the international game but her legacy towards goalkeeping continues as numerous young boys and girls cite her as their role model and inspiration for pulling on the goalkeeping kit. Among her many achievements, Hinch’s in-depth research into her opponents has opened the world’s eyes to the science behind goalkeeping and elevated the position from being seen as simply a last-ditch ‘shot-stopper’ to being a position that calls for a special blend of mental acuity, agility and courage.

In an emotional message to fans, Hinch said: “I’m struggling to express how I feel about being awarded this again for the third consecutive year. I have very mixed feelings.

“Of course, I’m honoured to receive the award and I’m humbled to win FIH Goalkeeper of the Year for 2018. There were some great goalkeepers in this category who put in huge standout performances last year and I felt were more worthy of the award.

“I’m grateful for every single vote. That means the world to me. To win amidst a break from the international stage, knowing that so many people remember and recognise my contribution to the game is something that has been emotionally overwhelming.

“The goalkeeper is now seen as one of the coolest positions on the pitch with people young and old eagerly donning the equipment… this is a brilliant legacy and one that I am very proud to be part of creating.”

Vincent Vanasch is one of a trio of Belgium male players winning a FIH players’ award and, in a two-year period that has seen the Red Lions move to the top of the world rankings and win a World Cup gold medal, some would say that the goalkeeper is the platform upon which Belgium’s success has been built. Certainly, his nomination as Player of the Match in the World Cup final – where Belgium beat the Netherlands 3-2 after shoot-out – is testimony to how important his presence is to his team.

The international team’s success has been a long time in the making and Vanasch is one of the squads most enduring players. To date, he has represented his country 211 times, in an international career that took off at a 2009 World Cup qualification event where Belgium took the silver medal.

Vanasch, who was also crowned FIH Goalkeeper of the Year in 2017, was always destined to be a goalkeeper. Aged five he first put on a pair of goalkeeping pads, made from bamboo. The small boy had to be constantly picked up by his father as he dived around the goal - he was light and agile on his feet but too small to be able to get up again with the huge pads weighing him down.

In a memorable year, Vanasch says his standout moment was appearing with the World Cup in Belgium’s Grand Place in front of 6,000 cheering fans as the team made a triumphant return from the Odisha Hockey Men’s World Cup.

“This journey is not only about sport, it’s also about living your passion, working really hard to achieve your dreams, inspiring a team, a generation, and a country. I couldn’t be more proud to have written history for Belgium at the 2018 World Cup.

“Winning this award for the second time means a lot to me because it represents all the sacrifices, all these hours, days, and years of training as well as all the ups and downs throughout my career.

“At one point I almost gave up hockey. Fortunately, back then I had the support of my family, my wife, and my friends. I will forever be grateful to them because today I’m living my dream, and it’s only the beginning of the Red Lions’ story... Thank you all.”