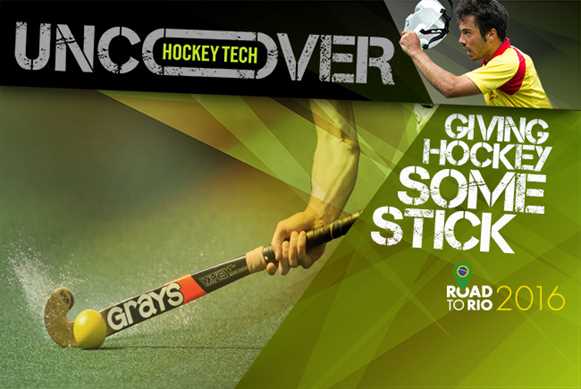 When you buy a new hockey stick, what is the standout feature that makes you choose one brand over another? Is it colour? Weight? Feel? The fact that your favourite player uses that brand and you know you will also be able to tomahawk the ball into the top corner of the goal if you have that particular stick?

Well, the science behind hockey sticks is as detailed and involved as any other piece of sports equipment. Just as the Sky cycling team spend hours and hours, and thousands of pounds on researching the best tyres or seats for their bikes, so too, hockey stick manufacturers pour resources into stick development.

Hockey sticks have evolved dramatically in the past 15 years, in terms of both shape and composition. The major change – from wood to composite – took place at the beginning of the 21st century. As managing director of Mercian Sports and former England goalkeeper, Simon Mason, says: “It was the greatest equipment evolution since goalkeeping materials went from leather to foam”

Following this major change, the focus has been on the quality of the sticks, their consistency, durability and power. The major brands are now using the same high level materials that are used in aeronautics and ballistics. Mason says: “The highest quality raw materials such as Carbon, Kevlar and Glassfibre are now imported from countries such as Japan, Taiwan, Germany and even Scotland. It has been researched, refined and developed over a long period of time. This means that the pure quality of the established brands sticks grows every year and the consumer benefits massively.”

A major driver in stick design is the desire for more power. However, Mason says that the belief that the best sticks are 100 per cent carbon is a fallacy, and a combination of advanced materials, such as graphite, kevlar, basalt, silicon and graphene will deliver the technical results suited to an individual’s needs.

Like all other sports equipment, hockey sticks do not develop through luck: the advances in stick technology are driven by manufacturers, who liaise with the factories in deciding which materials might be used to give one type of stick the edge. A lighter, yet stronger material; a product that allows greater control; a more comfortable hand-grip, there is a relentless drive for perfection. Hockey stick manufacturers will also look to other sports. For example, basalt is currently being used in both hockey sticks and tennis rackets and a number of sports are contemplating the use of graphene.

The players themselves will also have a say in how sticks develop and this can vary between playing cohorts. Mason explains: “The brands are trying to produce lighter sticks for the club players, but international players are moving to longer and heavier sticks for increased hitting power, but they are incredibly strong athletes who can cope with that.”

Weight reduction, created by the use of better quality raw materials and more consistent inner chambers, is one current trend: custom-made resins (the glue used to hold the composite materials together) is another. Here both carbon and rubber nano particles are being used to increase strength and add some shock absorption qualities. Stick handles are made using internal and external silicon and rubber coatings in order to decrease vibrations caused by incredibly stiff sticks.

Any new stick has to go through three tests before it becomes a recognised ‘weapon of choice’ on the pitch. Firstly, the manufacturers will carry out tests over a 12-month period, including breaking strain and stiffness tests as well as some of their sponsored players putting the stick through its paces. Then the stick has to conform to FIH regulations – without the international federation’s backing no brand of hockey stick can be used at top level events; and finally, the acid test itself – do the players like it? In this fiercely competitive world, that is the factor that will make or break the stick.