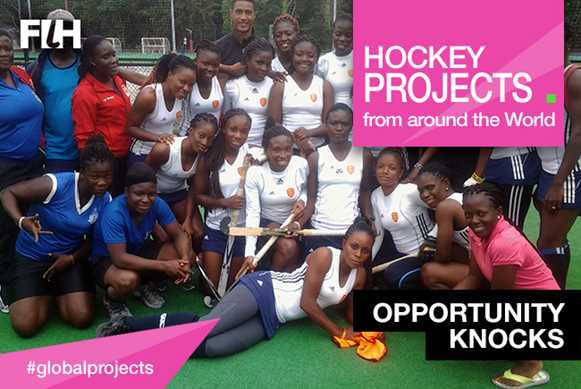 Raw, talented and keen to learn, a recent visit to Bisham Abbey by the Ghana national women’s team left no-one doubting the scale of their ambitions.

For the coaching team of Darren Cheesman, Siegfried Aikman and Mark Jarvis, and England Hockey Relationship Manager Lucy Rowe, the target is a sustainable hockey scene at grassroots and high performance level, with qualification for a major international event, such as the 2017 Commonwealth Games, within the next four years. But speak to 21-year-old Elizabeth Opoku and it is Rio 2016 that is on her radar.

"I first saw the team in Delhi in Hockey World League Round One and I was taken by the raw talent on display. The players are frighteningly competitive but lacked tactical organisation" says Cheesman.

“This team could be brilliant but there are strategies that must be in place," he adds. "We are teaching the players to think for themselves and find solutions under the guidance of their coaching team.”

Opuku agrees: "We have learnt so much. For example, we know that the defending area is split into red, orange and green zones, we must keep the ball out of the red zone and force the opposition into the green zone."

Ghana’s coaches have been mentored through all sessions by Aikman and Cheesman, their hope is that the team will continue to work on these principles in the future.

For the partners behind the TAP project the emphasis is far more upon its long-term nature. Rowe says: "Our three aims are Workforce Development – creating umpiring and coaching education pathways in West Africa area; Resources – for which we have a “Kit 4 Africa” campaign that has already yielded over 1000 sticks & other kit; and High Performance – supporting the development of the Ghana Women`s team and their extended support staff.”

All three targets are being met. The coach educator programme has resulted in 21 level one coaches, against a target of 12; 18 level two coaches against a target of four; plus 21 trained umpires; Equipment is on its way to Ghana; and Ghana is in line to do well at the African continental championships.

Over the next few months, the programme will continue with further workforce development programmes in West Africa. However, for the 22 athletes who spent 16 days at in England, the Africa Cup of Nations and Rio 2016 is never far from their thoughts.

There was an unmistakable glint in Cheesman's eyes: "What a story that would make," he said.