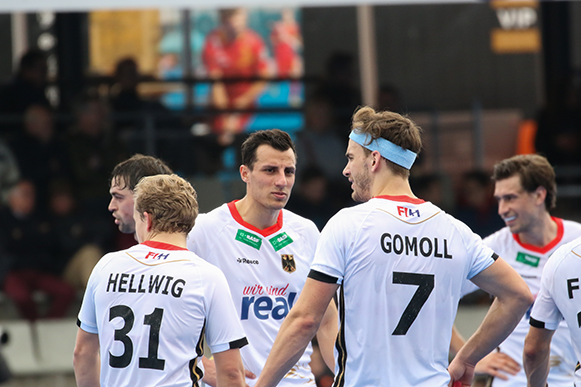 Kais Al Saadi has been Head Coach to the men’s national German team since November 2019. Prior to that, Al Saadi held a number of coaching roles with both club and national teams, including the top German side UHC Hamburg, the gold medal-winning German women’s indoor team, and several national youth teams.

With his German men’s team all set to take on the might of European neighbours Belgium in the opening fixtures of the resumed FIH Hockey Pro League, Al Saadi is very aware of the challenge his team faces.

Belgium are reigning European and World Champions and currently are ranked at number one in the world. In their previous FIH Hockey Pro League encounter, which took place in June 2019, Belgium held the upper hand, winning 8-0. Germany, for their part, started this campaign with a solid win over Spain – and Al Saadi and his players will want to pick up on that momentum.

Are you satisfied with the amount and quality of preparation time you have had with your team ahead of the first FIH Hockey Pro League fixture?
Kais Al Saadi: Of course, the time and quality of the preparations [ahead of the FIH Hockey Pro League] has been limited. There are a lot of things to do. We are coming from a gap [in competition] of over half a year now so we are happy at least to see each other again and work together. The question is not so much ‘if’ the amount and quality of preparation is enough but that is an obvious ‘no’.

How excited, motivated and ready do you feel the players are for a return to Pro League action?
Kais Al Saadi: Well, they are very ‘excited’, but it feels a bit surrealistic still. I am just happy that everyone is healthy, and their families are okay. The motivation is a no-brainer because nobody is over-played, everybody is ready to do sports and play hockey again together. ‘Ready’, not so much. Pro League has been very good for us in 2020. We were looking forward to the games. Our start in Valencia [against Spain] was okay. Motivational concerns, I don’t have, but, of course, the team is far from being on-point and sharp and ready. But we will learn a lot and compensate with excitement and motivation.

Are you able to draw any positives from the break from action of the past seven months?
Kais Al Saadi: What is the positive to be drawn from a lockdown and a corona virus like this? It is hard to see any. Many people worldwide were suffering either directly through health issues or indirectly with economic concerns, social concerns – there were many things that could go wrong. So the positive thing is that everyone [in the squad] is healthy, everyone has avoided an infection and their families are well. And, if you look at the outcome of a break like that where no-one could really play hockey or see the team, then nobody will be overplayed, nobody will be over exhausted because they have had time to take care of themselves, so that is one positive aspect of it.

What will you be looking for from your players if they are to win this opening game of the season?
Kais Al Saadi: Ahead of the restart [to the FIH Hockey Pro League] we have a camp for about a week to see each other finally, and then we play the European and World Champions, so that is quite tough but at least we will know where we stand and where we are at. If we are to win the opening games, then we need courage and commitment to compensate for any tactical shortcomings that naturally occur when you haven’t had the chance to prepare yourselves properly.

Can you sum up the importance of the next few months when it comes to preparing for the EuroHockey Championships and the Olympic Games?
Kais Al Saadi: It is less than a year until the Olympic Games, well, that is what we all hope, we don’t know exactly.  It is in the calendar and we take whatever is in the calendar very seriously. It is the final phase ahead of the Olympic Games so Pro League, which has been a great motivational booster for us, is the only competition where we get to play top nations, to compete, to try things, to learn, to develop a team that will be capable of taking the challenge of going to the European Championships and the Olympic Games. So yes, the importance of the Pro League is very high and that is why we are taking it very, very seriously and I am looking forward to the challenges ahead of us.