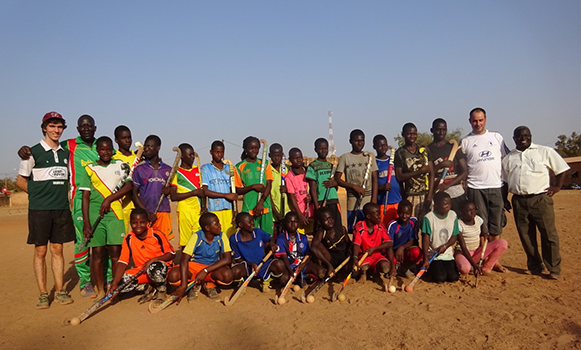 What do you get if you take a hockey-loving humanitarian and give him a mini-bus? Well, in Gabriel Tuscher’s case the combination led to an ambitious project called La Route du Stick.

In 2015 Tuscher, who has a long history in hockey humanitarian projects, drove a van from Switzerland to Belgium picking up hundreds of pieces of donated hockey equipment from local clubs and associations along the way. His aim was to take the equipment to the African nation of Burkina Faso where he hoped to inspire the local youngsters to take up hockey and improve their health and social welfare in the process.

Having collected hundreds of sticks and other hockey kit, he then faced the problem of how to get it from Belgium to Africa. The answer … to drive it.

The success of that venture, four years ago, has prompted Tuscher to repeat the initiative but on a much larger scale. On 19 September 2019, he will set out on a similar journey, but this time collecting equipment from a number of European hockey events being held in the coming months. 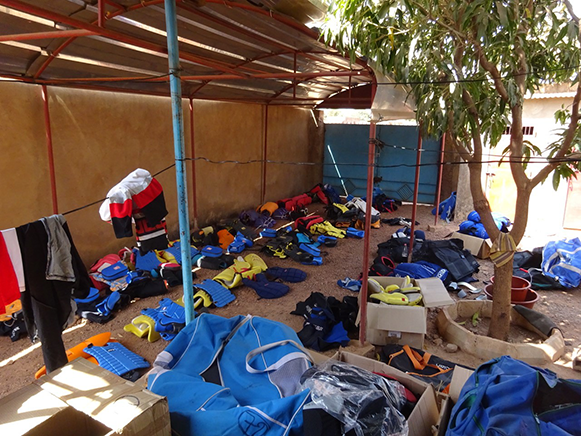 From previous experience, Tuscher knows that persuading people to donate equipment will be the easy part. In 2015 a message on social media brought three tonnes of equipment. This time around he has the additional help of a number of National Associations and Regional Associations in collecting donations.

But what is the driving factor that is behind this second trip?

“The first trip was a great experience,” says Tuscher. “Crossing West Africa by road, meeting people day after day. When you travel by plane you reach your destination in a few hours and you even don’t know the name the guy sitting next to you. By road you have to meet people. And when you want to spend more than one night in a place, you appreciate it. You meet local people, fisher men, farmers, tailors. By road you see how populations and cultures change.”

Of course, crossing Africa by minibus is not easy task. Tuscher says the journey will test his patience and flexibility. “I know Burkina Faso well, I have been involved there for more than 20 years, but the other countries are different, culturally and administratively.

“You face new cultures, new ways to get across borders. Crossing a border can take between two hours to a few days. In Africa you have to learn to be patient and flexible. You know your programme can change daily.” 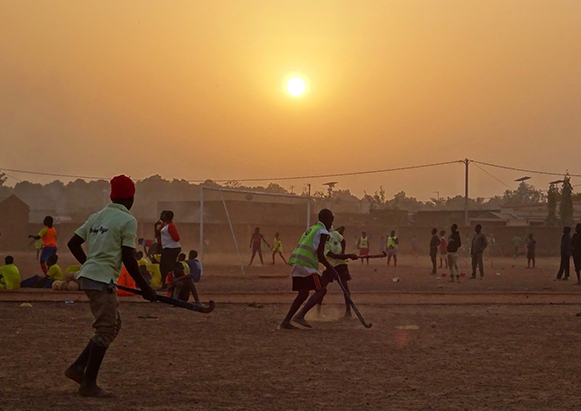 To complete the journey, Tuscher is aiming to raise 20,000CHF which will help source a second hand mini-bus, which he will fill to the ceiling with donated equipment.

Tuscher will then drive the 8,700 kilometres from Brussels to Togo, West Africa, visiting seven nations along the way. Over a three-four month period he will deliver education courses for teachers, coaches and umpires and run hockey coaching clinics for children or teams. Each coaching clinic will then benefit from some donated equipment. He also hopes to hold some talks with government departments to discuss future initiatives with both the National Associations and the African Hockey Federation.

And twice, it seems, is not enough for this dedicated hockey humanitarian: “I’ll set a schedule and try to drive across as much of Africa as I can. If I can’t do it all in this next trip I’ll do it again, and again, and again, once or twice a year maybe.”

The project is supported by The Hockey Foundation (THF), which exists to promote and develop hockey throughout the world in liaison with the FIH. The aim of The Hockey Foundation and one which makes Route du Stick such a perfect match, is to make the world a better place through hockey. La Route du Stick will contribute to HockeyReady, an initiative that aims to source and distribute more than 100,000 hockey sticks to development projects across the world. The HockeyReady initiative is part of Hockey2024, the FIH/THF joint global development strategy.

How can you help Gabriel and La Route du Stick?

Information about equipment collections will be announced over the next few months, in the meantime, to support and donate, please follow this link: here