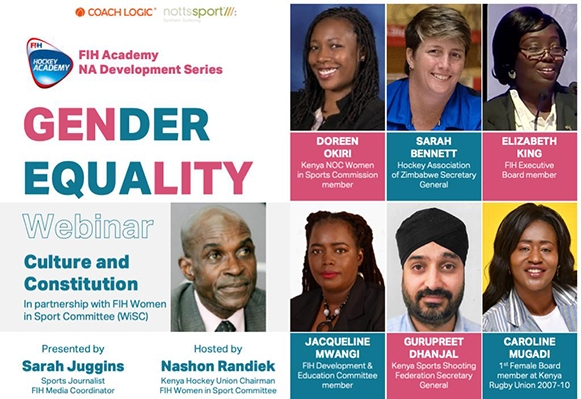 When it comes to gender equality on the African continent there is little doubt that there are complex issues involved. But a coming together of some of the sharpest minds, from an array of sports, has started a conversation that could lead to an exciting strategy to tackle at least some of these issues.

Where outsiders looking in could be forgiven for thinking that gender inequality comes predominantly from the perception that the place of a woman is as a home-maker, that is just one part of a much more nuanced and labyrinthine landscape.

Family finances, a lack of facilities, educational priorities, few competitive opportunities, a lack of role models, a lack of visibility in the media, cultural beliefs, religious beliefs, institutionalised composition of predominantly male board rooms, a lack of childcare facilities at the sports field. Many of the barriers to equality within the sport will be familiar across all continents but in many African countries these factors are heightened when combined with poverty and social issues.

The Gender Equality webinar, hosted by FIH Academy and the FIH Women in Sport Commission (WiSC) and organised by the African Hockey Federation (AfHF) was a first step towards recognising and addressing issues that prevents female participation at all levels of hockey, from grass roots to board room level.

During a webinar that was presided over by Kenyan Hockey Union chairman and WiSC member Nashon Randiek and WiSC chair Marieke Fleuren, five panelists from hockey, rugby, pistol shooting and rifle shooting came together to raise issues and share knowledge and experience. Joining the webinar were representatives from across all continents, with participants from as far afield as Germany, Czech Republic, Spain, Trinidad and Tobago, Canada, Indonesia, Vietnam, Brazil and Egypt.

This impressive array of national and international athletes and board members spent more than 90 minutes sharing their wisdom as well as discussing practical options. As Dorren Okiri said: “We can all be strategic with our thinking, the big question is how do we make that strategy executable?”

Her answer, and one that was agreed upon by all the panellists was to find allies from both within and outside the sport. These allies could be other hockey nations, other sports bodies, sponsors formational companies and international corporations, education providers or any other interested party. Okiri suggested that many companies would like to be seen backing gender equality, so that was a good starting place to leverage support. As Caroline Mugadi said: “The important thing is to make sure you involve all the stakeholders in the journey.”

Both Nashon Randiek and Elizabeth King were adamant that much of the impetus to move towards gender equality had to come from women themselves. Randiek took the challenging approach, with a plea to women to step forward and change the narrative. The Kenya Hockey Union chair added that each natioanl assoiciation should set itself a target of 30 per cent female board members. King dug into her own experiences from being a school-age and junior player through to board positions at national and international level. “You just have to find the inner determination to make your own success,” were King’s rousing words.

Gurupreet Dhanjal urged national associations to engage from the top. His point was that change could only come if it had the backing of government, the National Olympic Committee and national level sports bodies as well as individual sports’ national governing bodies.

For her part, Jacqueline Mwangi pointed out the importance of education and impressing upon youngsters the need to grasp opportunities when they came along. As a teacher herself, Mwangi has seen how sport takes a back seat compared to academic subjects and she is keen to change that narrative, showing instead that playing sport can improve academic performance.

King and Mugadi were united in their belief that an approach that embraced positive discrimination in favour of women was the best way to kick-start change. Mugadi used an example from her own sport, rugby. She had been co-opted onto the Kenyan Rugby Union board but, once there, she was able to demonstrate her ability and now the appointment of females happens naturally through elections.

One easy-to-achieve and relatively low cost solution was put forward by Dhanjal. He explained how the rifle shooters in Kenya had identified some top female athletes and then there had been a concerted effort to raise their profiles on social media. This had turned the athletes into well-known sports stars and role models. The positive impact of this was being seen through increased awareness of the athletes, more coverage in the media and more participants at grass roots level.

This was a fully-loaded webinar where ideas were flowing. The challenge to the Africa Hockey Federation and its national association members is to turn ideas into a workable strategy.