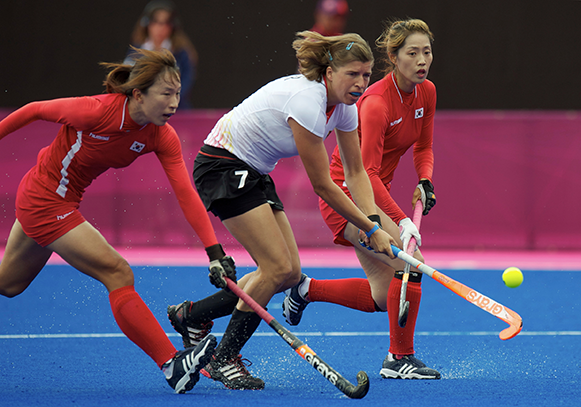 In the latest of our stories marking the original event dates of Tokyo 2020, we examine some of the families synonymous with hockey at the Olympic Games, with a special look at the hugely successful Keller clan of Germany.

While far from being the only sport where members of the same family have competed on the global stage – tennis’s multiple grand-slam winning sisters Venus and Serena Williams; boxing’s Klitschko brothers as well as Mohammed Ali and daughter Layla; brilliant Norwegian middle-distance running siblings Henrik, Filip and Jakob Ingebrigtsen, to name just a handful of many available examples – hockey has certainly had plenty of its own fascinating familial connections down the years.

India superstar Dhyan Chand, a triple Olympic gold medallist from the Amsterdam 1928, Los Angeles 1932 and Berlin 1936 Olympiads and one of the undisputed all-time greats of the game, was actually outscored by his own brother at the Los Angeles event, with Roop Singh netting 13 times compared to the 12-goal haul claimed by ‘The Wizard’. Chand’s son Ashok Kumar also played hockey for India, winning Olympic bronze at Munich 1972 as well as the 1975 World Cup in Kuala Lumpur, Malaysia.

Spain’s Amat family have also enjoyed their fair share of success, with brothers Pedro (bronze, Rome 1960), Francisco (1964, 1968, 1972), Jaime (1964, 1972) and Juan (silver, Moscow 1980) all being hockey Olympians. Francisco’s son Pol – the 2008 FIH Men’s Player of the Year, whose is also cousins with fellow Spanish legend and strike partner Santi Freixa – would go on to compete in five Olympic Games, winning silver medals at Atlanta 1996 and Beijing 2008. Playing alongside Pol at Atlanta 1996 was another cousin, Santi Amat, son of the aforementioned Jaime.

There is an inexhaustible list of other families worthy of note, including Australia’s Govers brothers and the mother-daughter combo of Barcelona 1988 Olympic gold medallist Lee Capes and Tokyo 2020 hopeful Kaitlin Nobbs, Great Britain siblings Richard and Simon Mantell, the Sruoga, Habif and Granatto sisters of Argentina, not forgetting Germany’s incredible Zeller and Wess brothers, winners of Olympic gold medals both at Beijing 2008 and London 2012.

Like the brothers Zeller and Wess, Germany is the home of one of Olympic hockey’s most celebrated families, three generations of which have represented the country’s national teams, amassing an impressive set of medals along the way. The family name? Keller.

The first time the Keller surname appeared on the hockey medal roster at an Olympic Games was at Berlin 1936, when Erwin Keller finished the 11-nation competition with a silver medal hanging around his neck on home soil. Chand’s incredible India team were worthy winners of the gold medal thanks to an 8-1 victory, although Keller’s Germany team were the only nation to even register a goal against the brilliant Indians, who finished the competition with 38 goals scored and just one conceded.

At Munich 1972, Erwin’s son Carsten Keller went one better than his father, claiming the gold medal as the captain of West Germany. On 10 September 1972, the host nation defeated Pakistan 1-0 thanks to a strike from Michael Krause. It 33-year-old Carsten’s 133rd and final international match, ending his career on a wonderful high in front of 15,000 fans at the Olympic Park.

“A German team had never won at the Olympic Games”, said Carsten, Speaking to Germany’s Die Welt newspaper in 2019. “My father, who died a year before my Olympic victory, had won silver at the games in Berlin in 1936, which was the greatest German hockey success until Munich. After we won our first European Championship in Brussels two years earlier and the team stayed together, we went to the Olympic tournament with the conviction that we would win gold.”

Remarkably, Carsten’s gold medal success would be matched by three of his children, all of whom played in the forward lines for their respective Germany teams. Eldest son Andreas Keller was the first, being part of glorious Germany team that took Olympic gold at Barcelona 1992.

Twelve years later, Carsten’s daughter Natascha Keller became an Olympic champion with Germany at Athens 2004. In a further familial twist, Natascha’s team-mate in Athens was Louisa Walter, who married Andreas. Natascha – the brilliant attacker who was named FIH Player of the Year in 1999 – would be given the honour of being Germany’s flagbearer at the opening ceremony of the London 2012 Olympic Games, a rare privilege that was also given to her father at the closing ceremony of Munich 1972.

As Olympic omens go, having a Keller in your team would appear to be a very good thing indeed.

On this day – 26 July 1992: The men’s hockey competition at the Barcelona 1992 Olympic Games begins, with eventual men’s champions Germany beginning their campaign with a 3-0 victory over India with strikes from Christian Blunck, Carsten Fischer and Stefan Tewes. Stefan’s younger brother, Jan-Peter Tewes, was also part of Germany’s gold medal-winning squad.