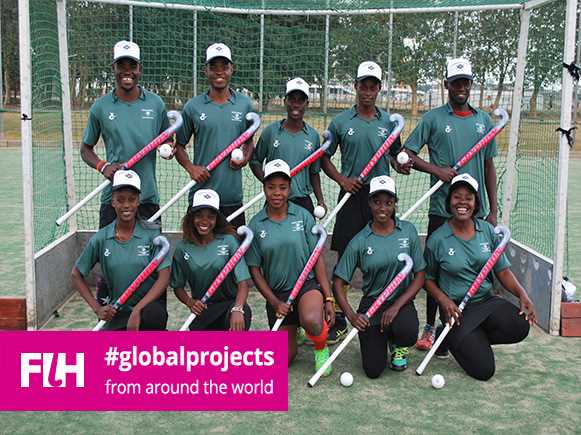 In the six years since it was created, Hockey Dreams Foundation has grown in scope and ambition. The organisation began life as a brainchild of Gijs Hardeman, who had previously set up a hockey project in Zambia on behalf of the KNHB, the Netherlands Hockey Association.

At the heart of the Zambia project, which had the backing of the International Olympic Committee, was the idea that local coaches should be running sport – in this case hockey – within their community.

Once the Zambia project ended, Gijs decided to continue the work through a new foundation.

Initially the organisation was known as the Kadish Foundation but, in order to make it fully international, it changed names in 2015 to Hockey Dreams Foundation. But the objectives stayed the same.

Currently, Hockey Dreams Foundation has 24 coaches, who have all been educated in coaching skills and protocol, working in regions that cover four African countries – Malawi, Uganda, Zambia and Zimbabwe. The aim is to eventually have coaches in 10 African nations.

Within each nation, the Foundation's representatives identify people who they feel have the potential to be coaches and leaders. Those selected are given the opportunity to become involved on a training and education programme and then provided with a project and the equipment to deliver the project.

And starting in 2019, Hockey Dreams Foundation is opening its own Academy. That means that coaches on the programme have to follow a specific pathway to get their Hockey Dreams certificate. On the curriculum are: personal development – which is called Education for the Future; training skills; and work & life skills. There are also modules such as leadership qualities, umpiring and coaching courses, administration and event organisation.

Eventually, the coaches will have the knowledge and skill to set up and run a local NGO. All the coaches receive an allowance when they perform their tasks, ensuring that taking a career pathway in coaching is a viable and sustainable option. Once established, the lead coach is able to choose other coaches to undergo training and to ensure succession. The lead coach also delivers training to the new coaching recruits – thereby reducing the need for intervention from Hockey Dreams Foundation headquarters in the Netherlands.

Initial funding for the projects comes largely from businesses and individuals who are based in the Netherlands. There are also financial and equipment donations from hockey clubs and teams. The Foundation visits all its projects regularly to check that the equipment and finding is being used in the most effective way.

Within each country that the Foundation operates, there are eight strands to its projects. These are:

Hockey camps – These are organised two or three times a year by the coaches. At one camp up anywhere between 200-400 kids can be playing on one pitch. There are coaching clinics, games, workshops, tournaments and a chance to hear the coaches' own hockey stories.

Hockey Stixx – the scheme under which European clubs and individuals send equipment to communities in Africa. The Lab, which helps members of the local community produce hockey equipment such as shin pads and cones.

Super5s – This is the the competitive arm of the Foundation. The coaches organise leagues throughout the year  where local hockey clubs, which have been formed by the Foundation, join in. A lot of people come to watch these game.

To explain how the process works, we take the example of the coaching programme in Zambia.

In Zambia, the 10 pioneers coaches have either finished or are finishing their high school and a few of them are now attending college. Not only are they providing hockey activities within the community but they are also acting as role models. In addition, the hockey club provides a safe space where drugs and criminal activities are driven out.

One such coach, Samuel Tagwireyi, is now the coach for the Zambia U18 national team who recently finished fourth at the Buenos Aires Youth Olympics.

In six years, the people working on the Zambia project have seen many changes for the good. It has changed the lives of numerous people who came from very deprived backgrounds. They all have a higher level of education that would not have previously been possible; they have developed numerous other skills; they are earning money that helps their families and they have become role models for many people around them.