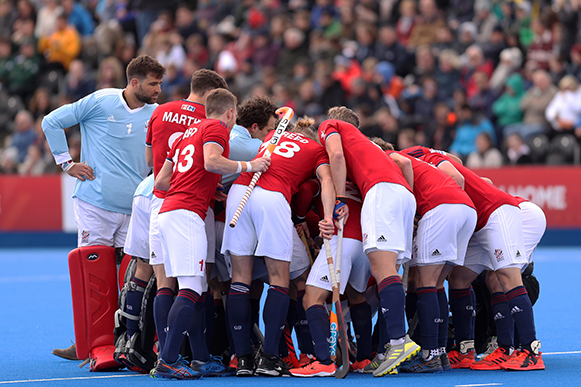 Dr Rebecca Townsend specialises in performance nutrition and works closely with the Great Britain and England men’s hockey squads as well as the Royal Ballet School.

Good nutrition to back up the physical and mental demands of training are a key part of the Great Britain and England performance programme. It is something that the coaching staff are very aware of and is part of their drive to attain excellence in all aspects of player preparation.

Dr Townsend is one of a team of Performance Nutritionists working with the national governing body. There is another Performance Nutritionist who works with the women’s squad and a third who works with the Elite Development men’s and women’s squads. Dr Townsend spends two days a week with the athletes, although she says the demands on her time vary depending upon the time of year and where the squad are within the Olympic cycle.

“I work very closely with the players, although some will require more individual support than others depending on various factors, such as; age, experience, injury status, time of the season, performance aims,” says Dr Townsend. “Some players will have very detailed dietary plans, others will just need advice and guidance, others will need more practical support. It totally depends on the individual. My role also involves a lot of implementing whole squad protocols, strategic planning and logistics around travel.”

Data plays a big role in Dr Townsend’s work. Although there are general nutritional principles related to the physical and mental demands of the sport, the Performance Nutritionists also tap into data from individual players to inform the nutritional advice they provide. The data take the form of anthropometric and physiological data, as well as data from the strength and conditioning coaches, the hockey coaches and the team psychologist.

There is little doubting the importance of good nutrition when it comes to performance levels. “An improvement in nutritional intakes can have a huge impact on an athlete’s health and performance,” says Townsend. “Some significant changes can often be seen with younger players that start on the programme and work on making their [nutritional] intakes more consistent, particularly increasing protein intake throughout the day and around training sessions. This often has a big impact on how the player recovers as well as increasing adaptation to the training programme, such as increases in strength, power and lean muscle mass.”

There is no one-size-fits-all nutritional plan, says Dr Townsend. Demand varies according to a number of factors such as: player position, height, weight, age, training age, time of the season, individual strengths and performance aims, physical outputs and performance demands on the pitch and injury status.

Townsend gives an example of the differing nutritional demands between a goalkeeper and an outfield player. She explains that goalkeepers have different physical demands. They do not cover the same distance as an outfield player but they do have to be explosive, powerful, have quick reaction times. They also may have added thermal stress if playing in the heat, due to the heavy kit and a reduction in the ability to lose heat through sweat.

Compared to an outfield player, a GK will generally have a lower carbohydrate requirement and may have an increased need for a supplement like creatine. They are likely to also have a different hydration strategy, because they are able to keep their drinks bottle with them in the goal throughout a match.

There is, of course, no ‘wonder’ food or vitamin that will guarantee success, but Townsend is an advocate of Vitamin D, both for athletes and the general population. She says: “Vitamin D is especially important in the winter months (particularly in the Northern hemisphere), when sunlight exposure is limited. We utilise blood tests to measure vitamin D concentrations in our players, so that we can prescribe specific and individual vitamin D supplementation protocols.

Dr Townsend also encounters the tricky issues of athletes not eating enough. She says this can be due to a number of factors and is not always a conscious decision. Very busy schedules that don’t allow sufficient time to snack between training sessions is one common factor.

“Of course, sometimes,” she adds, “athletes can purposefully under-fuel in order to change their body weight or body composition or because they believe it will improve their performance. There are often multiple reasons why this would happen and again it is always treated on an individual athlete basis.”

And Dr Townsend has this advice for people who are playing sport at any level. “Getting the basics right is the first thing to work on. By this I mean, limit intakes of processed foods, cook from scratch using fresh whole ingredients as much as possible, eat at least five portions of fruit and veg each day, choose high quality low glycaemic index carbohydrates (most of the time), generally choose lean protein options and try to eat oily fish twice or three times a week.

“Hockey is a high intensity game, which requires carbohydrate for fuel, so pre-match meals need to be predominantly carbohydrate based and the post-match meal should be balanced, with a decent portion of protein. I play hockey myself and often find that post-match teas are not good enough for recovery, so I bring my own meal and snacks. Being organised and prepared is key.”