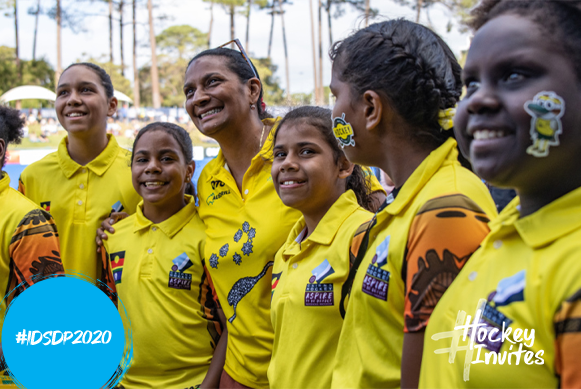 Creating sports environments that are inclusive and safe is at the heart of the BDO Aspire Learn Well, Live Well, Lead Well Indigenous hockey programme.

And, in an effort to inspire its participants, organisers used the FIH Hockey Pro League matches between Australia and Argentina to add another level of motivation and desire to succeed among seven young women from Far North Queensland currently taking part in the project.

As part of Hockey Australia’s first dedicated Indigenous weekend, students from Cairns Hockey’s Aspire to be Deadly programme were given the opportunity to be a unique part of the celebrations.

The Indigenous students selected for the trip were chosen from Cairns West State School after they had demonstrated high standards of leadership, commitment and responsibility at school, at home and through the hockey programme.

For three of the group, this was the first time they had been on an aeroplane as they flew to Perth from Cairns. Highlights of the trip included playing alongside current members of the Hockeyroos and Kookaburras in modified games during half time of the Pro League matches, meeting dual Olympian and former Hockeyroo Nova Peris OAM, and given prime viewing positions to watch Australia’s national teams in action.

For the seven students the experience was testimony to the success of the Aspire programme, something Hockey Australia CEO Matt Favier highlighted in an interview after the Pro League matches: “Considering all of the various elements and activations that took place around our first Indigenous themed round, having these young Indigenous girls from Cairns part of it and providing them with this experience was certainly one of the best things to come from the weekend.

“To see the smiles on their faces and the fun they had during their time in Perth is evidence of the positive difference and impact the Aspire to be Deadly Program is having in Far North Queensland.

“Huge credit to Julie McNeil and her team for what they are doing in this region, both from a hockey sense but more importantly from a life and wellbeing perspective.”

The Aspire programme has multiple aims: to improve school attendance, to support young women into leadership roles, to help raise levels of self-confidence and to highlight healthy lifestyle choices. Underlying these ambitions is the umbrella aspiration of opening opportunities for indigenous women.

Leading the programme is Cairns Hockey, who have partnered with the Australian Federal Government NIAA (formerly Indigenous Advancement Strategy). Through hockey programmes, the participating women and girls will develop strong life skills such as team work, problem-solving and addressing challenges head-on without resorting to defensive or aggressive behaviour.

The programme, which is led by general manager Julie McNeil, consists of a multi-week hockey programme. As part of the programme, participants develop the skills of the game but, says McNeil: “We align hockey skill learning with the understanding of holistic balance – where healthy and active choices will make you stronger, where setting and attaining achievable goals become stepping stones to broader opportunities.”

McNeil adds: “Sport is globally recognised and increasingly utilised as a vehicle to drive positive behaviour changes, in areas such as health and well-being, social cohesion, disability inclusion, gender equity and breaking down barriers of discrimination, language and culture and economic disadvantage suffered by underrepresented groups.”

Two new developments in the programme are the development of Aspire Schools Deadly 5’s programme and the Aspire Holiday Fun Places.

Both projects are the result of a collaboration between Cairns Hockey and its member clubs and the Cairns West State School. Deadly 5’s is aimed at year groups 3-6 and will provide a weekly after-school community hockey activity. The sessions align with the national curriculum delivery of PE and can be graded as part of each students’s PE experience. Up to 30 participants are expected to take part in the pilot project which should run for 25 weeks.

The Holiday Fun Places is a holiday programme delivered at Cairns West State School and it will be open to indigenous boys and girls as well as non-indigenous pupils already attending the school.

The Aspire programme is also proving its sustainability with over 25 young people participating in 2018 and 2019 Aspire Cairns West Teams are transitioning to Cairns Junior Clubs in 2020 through the Aspire Schools to Club Program.

And for seven young women, the trip to Perth and the chance to meet their hockey heroes will provide memories to last a lifetime.