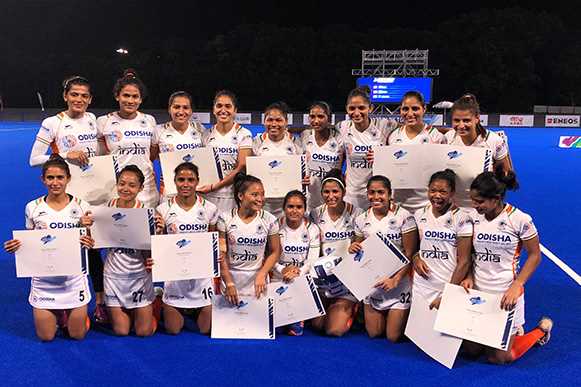 Tokyo, Japan: The usual “Test event” for the 2020 Olympic hockey tournaments took place in Tokyo from 17 to 21 August, therefore in similar climatic conditions as during the Olympic Games in about a year’s time.

The main purpose of this event was to test the operations which will be put in place next year as well as the facilities. One of the greatest learnings is that the brand-new Oi Hockey Stadium brilliantly passed the test, precisely, earning unanimous praise from teams and officials.

FIH CEO Thierry Weil said: “The Oi Hockey Stadium is a remarkable facility to boost the development of hockey in Japan. I invite all hockey fans to come and see matches in this venue and I urge them to invite their families and friends to come as well and share their passion.”

On the sports side, eight teams had been invited to participate in this event. The highest- ranked team, India (FIH World Rankings #5), won the Final of the Men’s tournament, beating New Zealand (5-0) after having lost (1-2) to the Oceanian team in the group stage.

India’s coach Graham Reid said: “It was a good opportunity for us to play in a semi-final and a Final. Indeed, we called yesterday’s match a semi-final because that’s what it was. So, it’s a good practice for that sort of games.”

Japan grabbed the third spot after defeating Malaysia (6-1) in the Bronze Medal match.

India’s happiness doubled a few hours later when the Indian Women’s team also took the first spot of the event after a success against Japan on the same score as during the group stage (2-1).

“For us, this event was very important to prepare for the FIH Hockey Olympic qualifiers and getting every match better. I think we did that. We reached a very good level in the last two matches. I’m happy about that,” said India’s coach Sjoerd Marijne.

The Hockeyroos registered their first win of the tournament in the Bronze Medal match against China (3-1).

Due to the nature of the Test event, there were no rankings points at stake.

“It has not only been a great tournament with eight fantastic teams but also a perfect opportunity to test the pre-tournament and match protocols and to see what set-up will be in place for the technical team at Tokyo 2020”, commented Tammy Standley and Christian Deckenbrock, both FIH Technical Delegates for this event.

FIH also took advantage of the Test event to launch its official campaign ahead of the hockey Olympic tournaments named “Gift of Hockey”, which is inspired by the concept of omotenashi - Japanese hospitality -, a cornerstone of Japan’s culture.

FIH Executive Board Member, IOC Commission Member and Asian Hockey Federation CEO Tayyab Ikram said: “We are very satisfied with the operations put in place by TOCOG for this event. Of course, some areas require some improvement – which is very normal at this stage of the process - but nothing which is causing us any major concern. This is very encouraging for next year’s Olympic tournaments. Now, it is of paramount importance that the Japanese community takes the opportunity of the Olympic Games to bring hockey in Japan into a new dimension.”

The qualifications for the 2020 Olympic hockey tournaments, which will be staged in Japan’s capital city from 25 July to 7 August next year and involve twelve Men’s and twelve Women’s teams from all over the world, are ongoing. Here’s an overview of the current qualification status:

The winners of the continental championships grab a berth to the Olympic Games Tokyo 2020.

The fourteen FIH Hockey Olympic qualifiers (seven for Men and seven for Women) will each feature two nations playing two back-to-back matches, with nations drawn to play each other based on their rankings at the end of the 2018 / 2019 Continental Championships. The matches will be hosted by the higher ranked of the two competing nations. They are scheduled for end October and early November 2019.

The FIH Hockey Olympic qualifiers will involve the following teams:

*Note: should one or more of these teams win their Continental Championship later on and therefore qualify directly for the Olympic Games Tokyo 2020, then this/these additional spot(s) for the FIH Hockey Olympic qualifiers will go to the best ranked nations in the FIH World Rankings (as at the end of the 2018 / 2019 round of Continental Championships) not already qualified (via the FIH Pro League or FIH Series Finals)

It is worth noting that the final participation in the Olympic Games for any team must be approved and confirmed beforehand by their respective National Olympic Committee.

The draw to determine the matches of FIH Hockey Olympic qualifiers will be held on 9 September.