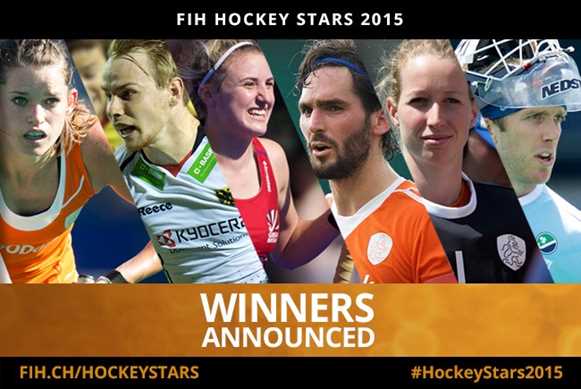 The International Hockey Federation (FIH) has announced the winners of its Hockey Stars awards for 2015, which sees Netherlands pair Lidewij Welten and Robert Van der Horst pick up the Player of the Year awards.

The Rising Star of the Year awards went to Great Britain’s Lily Owsley and Germany’s Chrisopher Rühr, the latter picking up this award for the second time in his career.

Netherlands captain Robert van der Horst, who picked up the FIH Rising Star of the Year award 10 years ago, has played exceptionally well throughout 2015. While the 31 year-old athlete provided consistently impressive performances at the Argentina Hockey World League Semi-Final and Hero Hockey World League Final, one of the highlights of his year came in August when he led his team to the EuroHockey Championships title in London, England.

His compatriot, Netherlands midfielder Lidewij Welten, continued to impress for the women’s team, her attacking flair and skill wowing fans around the world. Her ability to turn matches continues to contribute to the Netherlands dominance of women’s international hockey in a year in which they won the FINTRO Hockey World League Semi-Final, finished runners up at the EuroHockey Championships and came fifth in the Argentina Hockey World League Final.

Another hugely influential player in the FIH world number one ranked team is goalkeeper Joyce Sombroek. With someone as reliable as Sombroek standing as the last line of the Netherlands defence, the remainder of the team plays with huge confidence. Her dominance in the Dutch goal helped her team reach the Rio 2016 Olympic Games where they will aim to become the first women’s hockey team to win three consecutive Olympic titles.

Ireland men qualified for their first ever Olympic Games since 1908 and no-one will begrudge much of the credit going to David Harte, the Green Machine’s goalkeeper and captain.

Harte’s performances in the FINTRO Hockey World League Semi-Final ensured both a fighting chance for Ireland to get to Rio and his own position as Best Goalkeeper in that tournament. It was an accolade that he picked up again at the EuroHockey Championships 2015 when Ireland won a bronze medal, Ireland's first medal at a major international event.

Women’s Rising Star of the Year - Great Britain and England’s Lily Owsley, emerged as a potent strike force for her teams in 2015. Picked in the first instance for her speed, Owsley has now added skill, creativity and tactical know-how to her arsenal. She played a hugely important role in England’s EuroHockey Champions victory by scoring the goal that took England to shoot-out in the final, which they went on to win.

Since he first wowed the fans with his speed and skill at the Junior Hockey World Cup in 2013, taking the FIH Rising Star of the Year award that same year, Germany’s Christopher Rühr has not looked back. He was an integral part of the German team that took silver in last year’s EuroHockey Championship, was named Man of the Match in the final of the Argentina Hockey World League Semi-Final in Buenos Aires, and was also joint top scorer at that event.

Speaking about the awards, FIH President, Leandro Negre, said: “Congratulations to Lidewij, Robert, Joyce, David, Lily and Christopher who rightly deserve this global recognition for their consistently exceptional performances during 2015.”

He continued: “The ambition of the Hockey Revolution, our ten-year strategy for hockey, is to make it a global game that inspires the next generation. These athletes are making this ambition a reality through their stellar performances on the pitch and their commitment to growing the game of it. I hope they use these awards to drive others to achieve excellence and in doing so inspire the next generation of athletes coming into our sport.”

Players will be presented with their awards in their respective home countries over the coming weeks.

Along with these awards, the FIH will also be awarding a Coach of the Year and an Umpire of the Year Award as part of Hockey Stars 2015 which will be announced tomorrow, on 27 January.