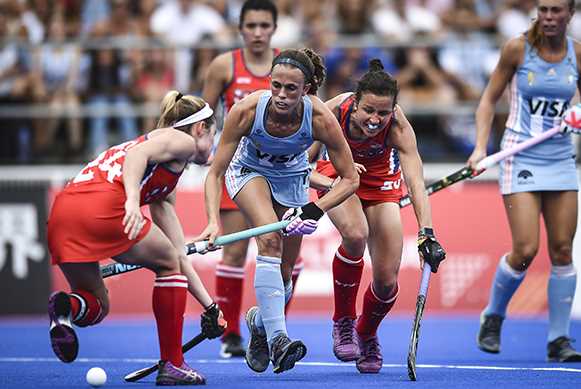 Argentina and USA are expected to be amongst the front-runners for the women’s title at the Pan American Games in Lima, Peru later this month. Copyright: FIH / Getty Images

The FIH Pro League and the FIH Series Finals ensured that there was no shortage of world class international hockey in the first six months of 2019. It was a thrilling ride, but there is still so much more to come. Numerous high profile - and hugely significant – international events are set to take place between now and the end of the year. Here is a look at some of the highlights.

July: Pan American Games takes centre stage
One of the world’s biggest and most important multi-sport events, the XVIII Pan American Games takes place in Lima, Peru between 26 July and 11 August. The men’s and women’s hockey competitions are always fiercely contested, and with direct qualification to the Olympic Games Tokyo 2020 on offer to the gold medallists, the 2019 edition is certainly no different. Reigning men’s champions Argentina will be seen by many as favourites to defend their title, although the Olympic champions can expect strong competition from four-time winners Canada as well as USA, Chile and Mexico. USA have won the two most recent women’s Pan Am Games titles, although Argentina will be determined to wrestle back a title that they have won on six occasions.

August: African and European continental titles up for grabs
The South African town of Stellenbosch will host the men’s and women’s African continental championships between 12-18 August, where Egypt, Ghana, Kenya, Namibia, Nigeria, South Africa, Uganda and Zimbabwe will all be in action. As is the case with all the continental championships, a first place finish will earn a ticket to Tokyo 2020, something that will also be on offer between 16-25 August at the Belfius EuroHockey Championshipsin Antwerp, Belgium. The Netherlands men and women go into that event as the defending champions but are sure to be challenged every step way by likes of Germany, England, Spain, Ireland and, of course, host nation Belgium.

Also included in the busy August schedule is the all-important test event for the Olympic Games Tokyo 2020. Taking place at the brand new Oi Hockey Stadium - the legacy facility that will remain in place after the completion of next year’s Olympiad - between 17-21 August, the men’s competition features Japan, India, Malaysia and New Zealand while Japan, Australia, China and India will compete in the women’s event.

September: Australia and New Zealand contest Oceania Cup
The fourth and final continental championship of 2019 will see Australia and New Zealand going head to head in the 11th edition of the Oceania Cup. The competition takes place from 4-8 September on Australian soil, with the city of Rockhampton in Queensland hosting an event that will also feature the Oceania International 5s competition, where Fiji, Papua New Guinea, Samoa, Solomon Islands and Tonga will also be in action. Australia men, recent winners of the inaugural FIH Pro League, have won all ten editions of the Oceania Cup played so far, while Australia’s women have won the competition seven times compared to New Zealand’s three victories.

October / November: FIH Hockey Olympic qualifiers to finalise line-up for Tokyo 2020
The Oceania Cup competition is important not just because of the Olympic tickets on offer to the respective winners, but also because the final results will be the last piece of the puzzle in determining which nations will compete in the FIH Hockey Olympic qualifiers scheduled to take place 25-27 October and 1-3 November. With the respective men’s and women’s continental champions of Pan America, Africa, Europe and Oceania securing Tokyo 2020 berths alongside host nation and Asian continental champions Japan, five of the 12 places at the showpiece event will have been determined.

If any of the teams above also qualify as continental champions, their place will be taken by the next highest ranked team in the FIH World Rankings as at the end of the continental championships. More information about the Olympic qualification process can be found here.