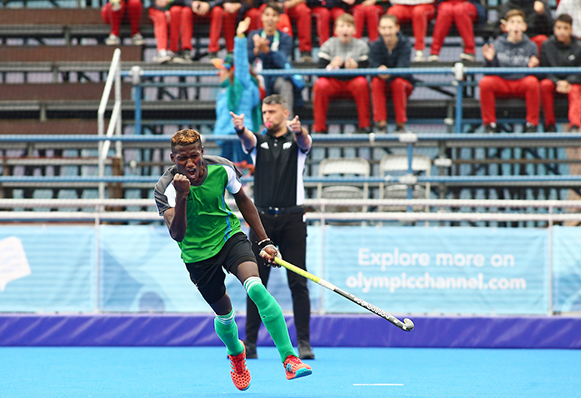 In October 2018 at the Youth Olympic Games in Buenos Aires, Argentina, Hockey5s was one of the hottest tickets in town, with fans flocking in their thousands to the Parque Polideportivo Roca on a daily basis to watch the action in two outstanding and unpredictable under-18 competitions.

Argentina women thrilled the home supporters by triumphing in the women’s competition by beating India in the gold medal game, but the men’s title went to Malaysia, a gifted and dynamic team that earned plenty of new admirers on their epic run to glory.

Whilst Malaysia were popular winners of the men’s gold medal, it was a fearless and talented team from Africa that came closest to stealing the hearts of the locals.

Zambia arrived in Buenos Aires considered very much as outsiders, but wins against Poland and Vanuatu proved just enough for the team to finish fourth in Pool A, setting up the toughest of quarter-finals against Australia, the winners of Pool A and two-time defending champions.

Zambia had shown occasional glimpses of their talent in the pool phase, but it was incomparable to the devastating attacking hockey they produced in the quarter-finals, earning a 6-4 victory over the reigning champions in what was the biggest shock result of the competition. Fifteen-year-old striker Phillimon Bwali was the star of the show, scoring a hat-trick and proving himself to be almost unplayable throughout.

Despite suffering defeat against eventual champions Malaysia in semi-final and being beaten to bronze by hosts Argentina, Zambia left a huge impression at the 2018 Youth Olympic Games. Bwali finishing the men’s event with 13 goals, a tally bettered only by the staggering 22-goal haul of Akhimullah Anuar of Malaysia.

Speaking to FIH almost two years after the event, Phillimon Bwali reflects on his Youth Olympic Games experience and the impact it has had on his development as a player. Phillimon also talks about the next Youth Olympic Games, which will take on African soil in Dakar, Senegal in 2026 (pushed back from 2022 due to the COVID-19 global health pandemic), as well as his ambition to play at the next FIH Men’s Junior World Cup, which will take place in India in late 2021.

Hi Phillimon, thank you for talking to us. At 15 years of age, you represented Zambia at the 2018 Youth Olympic Games in Buenos Aires. Tell us about your memories of that amazing experience.
Phillimon Bwali: “It was a great experience that I had in Argentina, especially when we won against the two-time defending champions Australia. In that game we won 6-4, and I even managed to score three goals in that match.”

Representing your country at a Youth Olympic Games is a huge privilege for any young player. What did it mean to you personally, and also your family?
Phillimon Bwali: “It means a lot to me, knowing I was one of the Zambian hockey players who has been picked to represent Zambia on that big stage there in Argentina. To my family, it means a lot as well. They never thought I could play on that level. It is something great for them, and I am sure today that they are happy for what I did.”

As a current member of the Zambia men’s team, how much did your experiences at the Youth Olympic Games help with your development into a senior international player?
Phillimon Bwali: It helped me in a lot of ways, mainly I learned how to be mentally strong, to believe in myself. I [now] know I’m able to take on any country in Africa and the world at large.”

Finally, what is your biggest ambition with the Zambia over the coming years?
Phillimon Bwali: “My ambition is to qualify for the U-21 World Cup, and make sure that we come out [from that event] with a medal.”

Zambia’s Hockey5s team honed their craft at the Olympic Youth Development Centre (OYDC), based in Lusaka.To read about how the country’s OYDC laid the foundations for their fine performances in Buenos Aires, please click here.