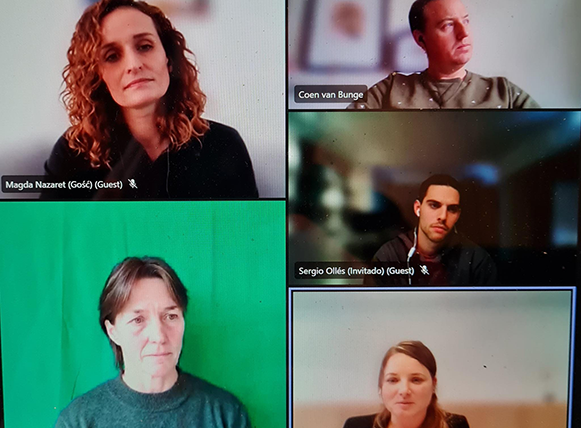 The fourth webinar in the series exploring gender equality within hockey took place online producing a wide and inspirational range of discussion points and shared experiences.

Speaking from their own experiences were: Ugne Chmeliauskaite of Lithuania, who is a former national team player and was recently voted in as the first female chair of ENSGO Youth; Coen van Bunge of the Netherlands is a KNHB Umpire Development Coordinator who has been helping develop Ukraine and Czech Hockey Good Governance Projects; regular EHF Tournament Director Magda Nazaret, who is also an Executive Board member of the EHF and the Polish Hockey Federation; and Spain’s Sergio Olles, who is Co-Founder of Club House Hockey App and a member of the EHF Youth Leadership Panel Member.

Explaining the aim of the day, Roberts said: “The idea is to open an honest forum to drive an increase in gender balance across our sport. The session is focused on a fully gender balanced organisation. What does that look like and how can we play our part? Consider your roles and how you personally can influence positive change in our sport.”

All panellists gave their account of where they felt their organisations were in terms of gender balance. Magda Nazaret was able to report that the Polish Hockey Federation was moving forward with an influx of women on the board, meaning that women’s voices were heard. “In the past the door wasn’t just shut, it was locked,” she said.

For Coen van Bunge, one of the most dramatic changes has been the introduction of mixed gender umpiring and female umpires officiating in men’s leagues across Europe. “They bring a different energy and that is a healthy evolution for the game.”

Ugne Chmeliauskaite explained that in Lithuania there were just 800 people associated with hockey, in 12 clubs and eight schools. The national association board of nine members was eight to one, but within clubs, the gender balance was nearer 60-40 % male to females. “We are focused on good governance so I can see change happening very quickly. Because we are a small organisation who all know each other, we can make change happen quicker than bigger organisations.”

With his background in a small Spanish club, Sergio Olles said that his participation in the EHF Youth Leadership Panel had given him a lot of insight into how to develop hockey, particularly for young players. But, he added, sometimes culture and traditions were strong factors in the maintenance of gender imbalances.In an insightful comment, he said: "While the world seems to be equal in many ways, it is like an ice-berg; below the surface there are many, many complexities."

Among the topics discussed were the importance and benefits of gender balance and diversity to an organisation; some of the barriers to equality; examples of good practice; and how to overcome stereotypes.

Among the key pieces of advice to emerge from the lively debate were the necessity of a strong mentoring process and the importance of role models. Both Ugne and Sergio emphasised the importance of developing and communicating a clear strategy and then giving the organisation  the necessary time to deliver that strategy. Coen spoke of the importance of celebrating and publicising success so that others felt confident to take similar actions.

One of the strong messages to emerge from the day was a personal story from Magda, who spoke of how a friend of hers took her young daughter to the local hockey club. There was no girls team, so the little girl joined in with the boys.

“For this girl, this is never brought to anyone’s attention, she just plays like anyone else,” said Magda. “This is such a wonderful lesson to everyone that with an approach and attitude like that, that little girl will likely become a great leader in the future because she sees no barriers.”

At the close of the webinar, praising the quality of the discussion, Marijke Fleuren said: “You have no idea how you have inspired me today with the wise things you have said. You have understood so well what this is all about.

For me, the messages that have come out loud and clear are: support each other, the value of role models and the importance of listening. You can’t do it alone, you have to do it together. Together, we can make the world a slightly more pleasant place. And to emphasise what was said at the beginning of this webinar, everyone can make a change, don’t wait, do it in your own way in your own environment.”