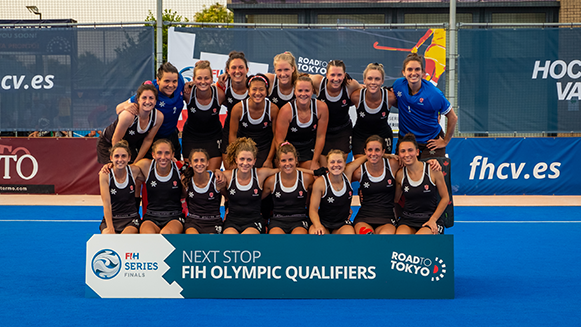 When Canada women secured a place in the final match of the FIH Series Finals in Valencia there was almost a palpable release of tension among the players, coaches and support staff. Head Coach Giles Bonnet and his team had devised an audacious and risky strategy to get Canada to this point and it had paid off.

Nine months of sacrifice, sweat, hard-work and doubtless some tears, all culminated in a 7-0 victory over the higher-ranked Italian team in the semi-finals of the event. The result meant that Canada would face host nation Spain in the final but, more importantly, it meant the north American team would now be competing in an Olympic qualifier in October or November of this year.

The result also meant that Canada moved up the FIH world Rankings to 18th, their highest placing since the ranking system began in 2003.

Why this was such a big moment for the squad was best vocalised, between tears, by an emotional Hannah Haughn, who scored the seventh goal against Italy. “This moment means everything. [As a squad] we’ve moved to Belgium, we’ve moved from our partners and homes. For some of us, we have put careers on hold," she said.

Haughn was referring to the fact that the entire Canada squad had moved en bloc to Belgium for the 2018-19 season to play for a number of clubs in the Belgium domestic league. The move was instigated by a number of factors, outlined by captain Kate Wright, speaking after the team drew their opening game with another higher-ranked team, South Africa.

“By moving to Europe and playing in the Belgium and Dutch league, we got to train and play in a hugely competitive league, against some top players, week-in, week-out. In addition, we were able to get together as a national squad and train.

“It was the only way we could afford to train as full-time hockey players and thanks must go to Giles for making it happen. It has changed the way we train and play and developed a new layer of resilience.”

Bonnet himself lives in Amsterdam, so the move enabled him to continue to coach the team throughout their time in Europe. It also meant he could call on his many contacts within the Belgium and Dutch club system to get placements for his entire squad. The move to Belgium was crucial to their ambitions as it meant the players would be paid to play and would also get money for additional coaching at the clubs. It was the only way many of them could continue to play for the national squad.

Like so many teams, the Canada women's team lacks sufficient finance to run  professional or even semi-professional programme. Showing immense powers of fortitude and tapping into a huge well of public support, the team ran a crowd-funding campaign to finance their FIH Series Finals adventure. They raised $81,000, and, says Haughn, the team are delighted and humbled with the way the public got behind them.

For one player, goalkeeper Lauren Logush, the team’s re-location to Europe was no big deal. She has been living and working as a hockey player and goalkeeper coach in the Netherlands for four years. But, she says, the move has made some very definite changes to the squad: “I definitely feel that the balls are being shot harder at me than a few months prior. Many players’ game sense and confidence in developing our own style of play has also certainly grown. We take pride in being an aggressive team and a lot of it comes from our preparation and daring to play forward.”

Having thrown caution to the wind in their all-out effort to make their first Olympic Games appearance since 1992, it is not just on the pitch that Canada women are demonstrating their new found daring and resilience.